Jane Fonda has been an American icon for four decades. Now, at age 74, the actress, activist, philanthropist and fitness expert says she's happier than she's ever been. 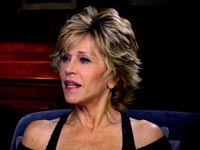 Fonda is living what she calls her “third act,” which began at age 60 when she examined her life and past and discovered who she really was. Despite winning two Academy Awards, launching an aerobics empire and marrying a media mogul (Ted Turner), Fonda says she has learned much more from her episodes of sadness and failures — a suicidal mother, a distant father, divorce and the “Hanoi Jane” moniker she may never fully escape.

As reflection improves her mind, Fonda also advocates for exercise, smart diets and sex as vital components for healthy aging.

She explains more about her journey in her newest book, Prime Time.

In this exclusive interview, My Generation contributor Valerie Bertinelli discovers how Jane Fonda is in her prime and loving it.

You may also like: Yoga may help with back pain.