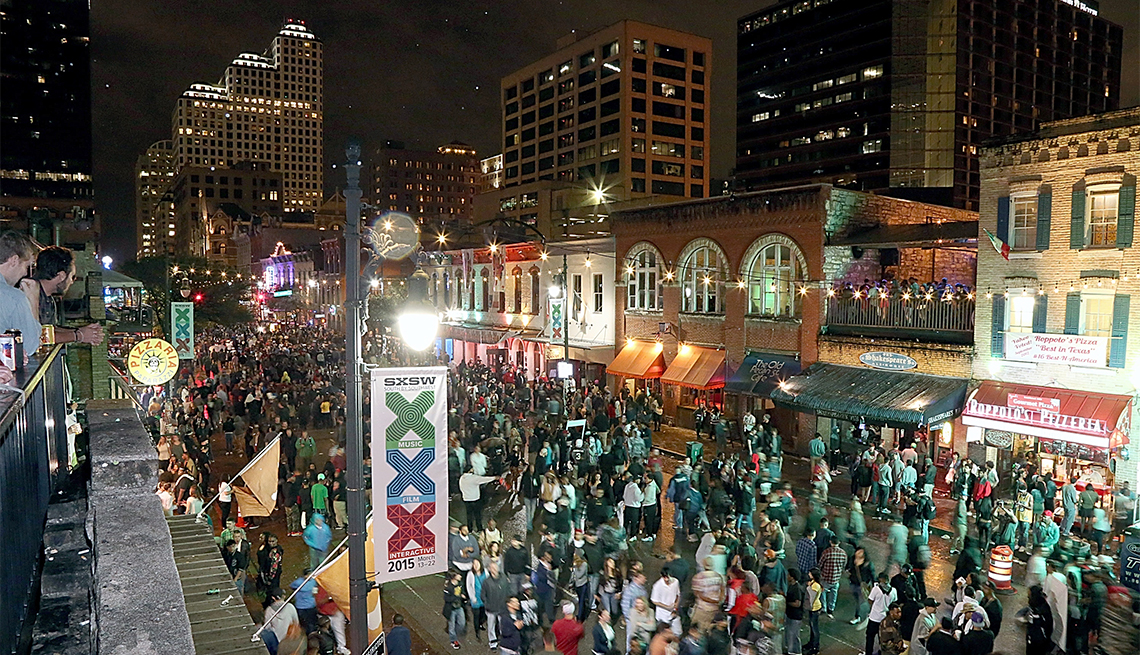 AUSTIN, TX - MARCH 20: A general view of the atmosphere on 6th street in downtown Austin during the South By Southwest Music Festival on March 20, 2015 in Austin, Texas.

When it launched 30 years ago, South by Southwest was little more than a music festival designed to showcase the exceptional talent found in Austin, Texas. About 150 people registered to attend that year, in 1987, a number that swelled to 700 on opening day.

There’s been nothing but gangbuster growth ever since.

This year’s sprawling 10-day event, which opens Friday, March 10, with a keynote address from Sen. Cory Booker, D-N.J., is expected to draw more than 140,000 ticketholders, many of whom are massively influential in film, media and technology.

The conference and festival now known as SXSW — or just “South by” — includes a job fair, a trade show and keynote speeches from an impressive array of moguls and innovators.

Still not convinced? Here are five reasons people of all ages should stay tuned to this year’s South by Southwest.

1. You can learn about Joe Biden’s plans to battle cancer.

Find out firsthand what the former vice president has in store for his White House cancer “moonshot” initiative on March 12. Biden is also scheduled to talk about the inroads being made on various fronts in the fight against cancer. Biden has focused heavily on cancer research efforts since his son Beau died of brain cancer in 2015.

2. You can check out some cool keynote speakers.

On tap are “Empire” cocreator Lee Daniels on March 12; actress Julia Louis-Dreyfus on March 13; astronaut Buzz Aldrin on March 14; music legend Nile Rodgers on March 15; and Country Music Hall of Famer Garth Brooks on March 17, among many others. Other speakers include Kesha, Seth Rogen, Nick Offerman, Jill Soloway and Bob Odenkirk. A complete lineup of keynotes is available on the SXSW website.

3. You can witness some cutting-edge technology.

This year will see the European Union’s first official appearance at SXSW with its EU@SXSW venue. This go-to place for a European perspective on innovation will offer interactive panel discussions, film presentations and technology demos from some of Europe’s hottest start-ups. Elsewhere, attendees can learn how robotics is revolutionizing health care, how urban designers are making transportation more efficient and how smart cities are using technology to improve the lives of residents. Also making its debut this year is a new stand-up format from General Electric that will transform lectures from reputable scientists into a live sketch comedy act.

There’s no shortage of forums for mingling and mixing with fellow registrants. In fact, SXSW has been called the Olympics of networking, but with barbecue and beer. Attendees can meet — and be inspired by — creative people from all over the world, both in their fields of interest and others. For those looking for work, the SXSW Job Market enables professionals to match their skills with cutting-edge employers. In short, if you can’t make contacts here, you won’t be able to make them anywhere.

5. Finally, as always, you can listen to some killer music.

This year’s lineup includes a smorgasbord of sounds, everything from indie rock and hip-hop to R&B and soul. Thousands of artists will pour in from dozens of countries across the globe. The major artists slated to perform include Cindy Wilson of the B-52s, rock pioneer Robyn Hitchcock and Austin guitar great Gary Clark Jr. YouTube’s SXSW shows alone feature some pretty heavy-hitting urban headliners, including R&B sensation Solange and the Atlanta trio Migos. SXSW is still one of the largest global music industry events of the year, making it a must-attend for any fan of independent artistry.