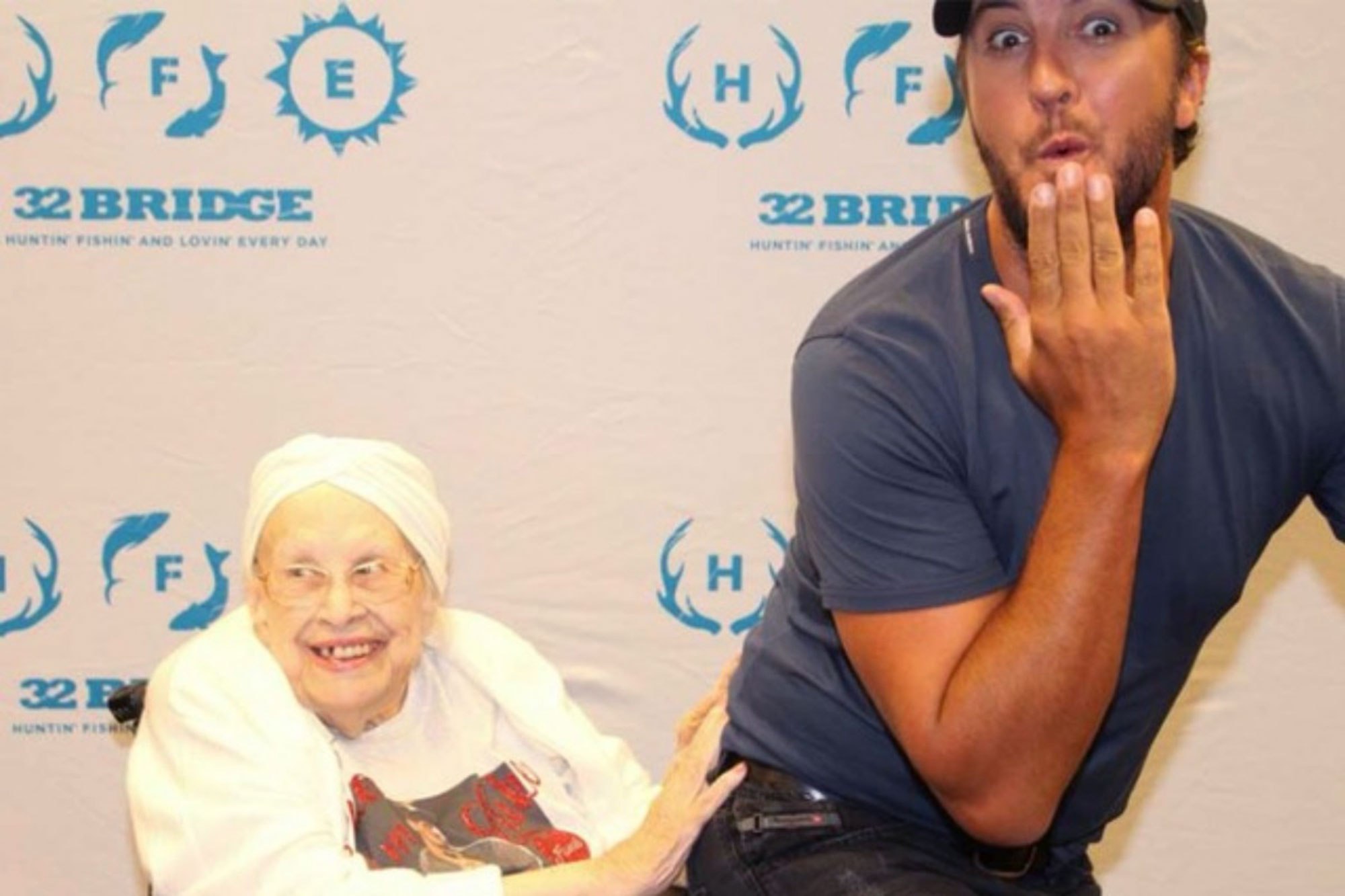 Luke Bryan holds a special meet and greet for one of his biggest and oldest fans.

She’s 88 years old, and her love for country music — and Luke Bryan — runs deep. Fortunately, Frances Stanaway enjoyed a rare opportunity to meet with the country music star, and as she found out, there were no boundaries.

“I touched his butt … and got a hug,” Stanaway told us during a phone interview from her nursing home in Missouri.

A picture of the now-famous butt grab is making the rounds on the internet, making everyone smile. But as it turns out, there is a much bigger story behind the image.

Stanaway is a terminally ill patient. The meeting — and the butt grab — were made possible through Stanaway’s hospice care provider, Crossroads Hospice & Palliative Care. Tracy Bunch, Gift of a Day program coordinator for the company, organizes the surprises for patients. “When I see their face smile and light up like that, that’s what it’s all about,” she said in an interview with AARP.

So why the butt grab? Bunch told us ahead of Luke Bryan’s "Huntin’, Fishin' and Lovin’ Every Day Tour" last week in Kansas City that she printed out a picture that Stanaway liked. The image showcased the country music star — who's known for his butt-shaking dance moves — with an emphasis on his behind. After autographing the picture at the meet and greet, he said, “OK, ladies, this is for Frances only.” That’s when the now-rare grab happened.

As revealed in a 2016 interview on Ellen and reported by People, Bryan said he had to implement a no-touching policy at meet and greets. “It’s funny ’cause you see, like early on in your career, you don’t want to tell your fans that they can’t interact with you, so you let them get away with kisses on the cheek and all that,” Bryan explained. “Someone will go, ‘Can I grab your butt?’ … and back then, if it was a polite ask, we would oblige them. But then you got 90 others…”

Coincidently, Bryan's "Country Girl (Shake It for Me)" is Stanaway’s favorite song. As the lyrics go, “Hey girl, go on now…Girl, shake it for me.” From her wheelchair, Stanaway couldn’t really shake it, but Bryan didn't mind. He kneeled next to her wheelchair, talked with her, put his hand on her knee, and they chatted. Her family said he acted like she was part of his family.

In an interview with Stanaway’s family days after the concert, they said she continues to tell the story to others in her nursing home. After the butt grab, excitement could be seen in Stanaway’s face for hours. Her daughter-in-law, Linda Sokolaski, said she smiled all night, and “it turned out to be the best day she's had in months.” And it’s been a long few months for Stanaway, as she has a number of health issues, the most serious being her inability to swallow sometimes.

There is no doubt that Stanaway will remember this special night when she met and touched her favorite country music singer. Before ending our phone interview, we asked her which of these three things she likes most about Bryan: his singing, his smile or his butt. Stanaway replied, “All three!”