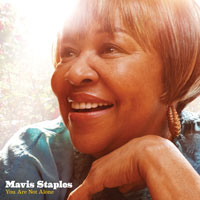 At 71, Mavis' voice remains a force unto itself. Since the death of her father in 2000, Mavis has kick-started a solo career by getting back to her roots with the help of Americana heroes such as Ry Cooder and, more recently, Wilco bandleader Jeff Tweedy, who produced her new album, You Are Not Alone. Speaking on a typically hectic day in her Chicago condo, Staples was preparing to hit the road for a West Coast tour. "I love bein' on the road," she says. "If we stay away too long, I'm ready to go."

Q: How did the Staple Singers go from being a pure gospel group to being one of the country's biggest pop acts?

I used to love hearing Ira Tucker and the Dixie Hummingbirds. Sam Cooke was with the Soul Stirrers, Lou Rawls was with the Pilgrim Travelers and we would all travel together in a caravan. Then, all of a sudden, white people wanted to hear us. We started playing folk festivals, and then we started getting calls for jazz and blues festivals.

I asked my father at one point, "Daddy, why we goin' to blues festivals? We don't sing no blues, Pops. We sing gospel." He told me, "Mavis, music is music and our music has some of every kind of music in it." The people we played to at the folk festivals — the flower children, the hippies — made me feel like we were still in church because they were such loving people.

Mavis Staples sits down with AARP.

Q: Was that why the Staple Singers started covering songs by the likes of Bob Dylan, Buffalo Springfield and the Band?

A: Pops often told us that back in Mississippi, if a white man was walking toward him on the same side of the street, Pops would have to cross over to the other side. So when he heard Dylan sing, "How many roads must a man walk down/ Before you call him a man?" he could relate to that. And when Buffalo Springfield sang, "There's something happening here/ What it is ain't exactly clear/ There's a man with a gun over there/ Telling me I got to beware," we felt it was gospel because it was truth.

Q: Jeff Tweedy and Wilco are probably the Buffalo Springfield of today. How did you hook up with him for your new album?

A: Tweedy and Wilco remind me a lot of Robbie Robertson and the Band, and we were the first group to cover "The Weight." I didn't know what I was going to do after the Ry Cooder record [We'll Never Turn Back, released in 2007]. Then Tweedy called and told me he had some songs he wanted me to listen to, including songs my father played for us when we were young. Tweedy really took time to study me. He didn't just throw something out there; he kept me in my comfort zone. One day, he said, "Mavis, guess what I have on my iPod." I said, "What?" He said, "I have all of the Staple Singers music from the '50s and '60s." And I said, "Well, you walkin' around, Tweedy, with the best music of my life." I told him I would love to sing my father's songs again. At the end of the sessions, he wrote "Only the Lord Knows" and "You Are Not Alone," which might be my favorite song on the album.

Q: How did he get it to sound so much like a contemporary Staple Singers album might sound?

A: The band that's playing on it is the band I've been traveling with for about four years. Rick Holmstrom plays Daddy's guitar licks all the time. Sometimes I have to look around to see if Pops is standing back there with him.

Singing songs like "Don't Knock" makes me so happy. It takes me back to when I was a teenager, the happiest time of my life. It was just my father's guitar and our voices. I could visualize Pops smiling and grinning with that twinkle in his eye when he was writing "Don't Knock." We had so much fun.  [Singing] "You don't knock, ring, push or hold/ The door's wide open, waitin' for your soul." And my mother and all of us would be laughing. "Daddy! You wrote that?" They were joyous times.