What makes the Rolling Stones so great? Is it their never-quenched rebellion? Keith Richards's death-defying lifestyle? Mick Jagger's lips? Those distractions will always play second fiddle to the music, where strong lyrics enliven wonderful melodies played with both precision and abandon. The bands below manage to capture similar bolts of lightning in a bottle. 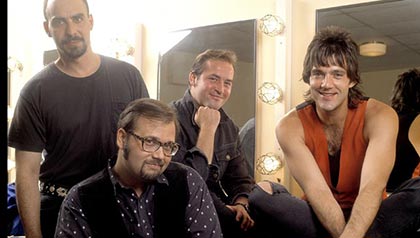 Named after one of Yosemite Sam's favorite words, this New Jersey band specializes in melodic detonations. Their volume and scruffy energy — note the blend of opposing forces in the song title — place them solidly in Rolling Stones terrain. "Blood and Roses," featuring a fiery guitar solo by Jim Babjak and nice walking bass by Mike Mesaros, became one of the Smithereens' best-known songs. (It's been featured in several films, notably Romy and Michele's High School Reunion.) 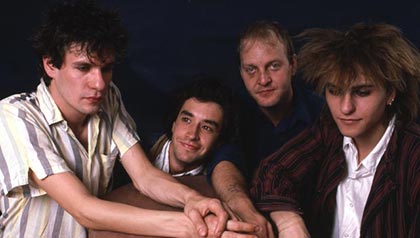 An opening guitar riff that evokes "Satisfaction." Horns that would be at home on Sticky Fingers. No-nonsense drumming to make Charlie Watts proud. Lyrics that are melancholy, ironic and funny. Slightly hoarse vocals careering from heartbreak to triumph. Meld these on "Can't Hardly Wait" and you begin to understand why so many people consider this Minneapolis band the Rolling Stones of 1980s America. 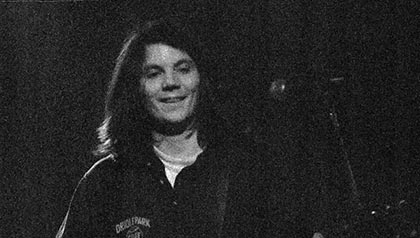 Two kids meet as school friends and decide to make music. Mick and Keef at the Dartford train station in 1960? No, Jay Farrar and Jeff Tweedy at Belleville Township High School in Illinois in 1981. Loving country as much as punk, the pair helped create a new sound: alt-country. No 50-year collaboration for these two, sadly: As the friends grew up they grew apart, and the band imploded. Farrar formed Son Volt, while Tweedy founded Wilco, one of the most popular groups of the past 15 years. "The Long Cut," with its countrified rock guitars and plaintive lyrics, makes you wish they'd stayed together.

Next: Are the White Stripes married? Brother and sister? >> 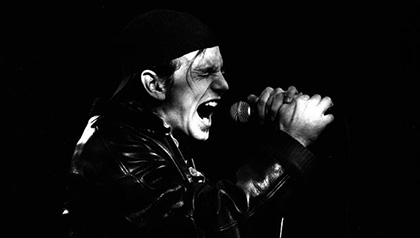 "Corduroy" gives you a good idea why Pearl Jam became the most commercially successful band to come out of Seattle in the early 1990s: The song's mysterious opening builds to a primal roar, topped with vulnerable lyrics, before unexpectedly simmering down. That gives you just enough time to catch your breath before the maelstrom is unleashed once more. This is clearly a band that has studied "Gimme Shelter"! And in common with Mick, Eddie Vedder is a classic front man, captivating and unpredictable. 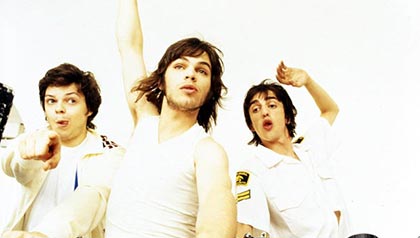 For those who prefer vintage Stones songs from the 1970s and '80s, this three-chord rave-up sounds like a cross between It's Only Rock 'n' Roll (1974) and Tattoo You (1981). Formed in Oxford, England, in the 1990s, Supergrass made it big right away but never stopped exploring new musical terrain. How can you not love a band that appeared as Henson-style Muppets in the video for this song? 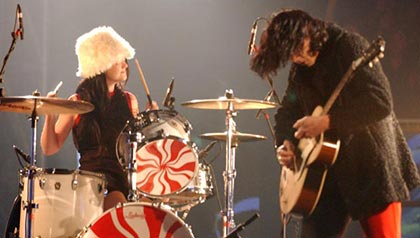 The White Stripes were Jack and Meg White. Were they husband and wife? Brother and sister? The Detroit duo played it coy, understanding, like the Stones, the importance of rock mythology. (They had been married, but were divorced.) Meg played drums and sometimes sang. Jack wrote, sang and played guitar. And that was the entire band! Their stripped-down sound harked back to the Mississippi Delta, but with a heaping dose of rockabilly. "Seven Nation Army" is a perfect example: its tough-but-catchy guitar riff and defiant vocals would not feel out of place on Exile on Main Street. (The "bass" line you think you hear on this track is actually a guitar run through an effects pedal.) 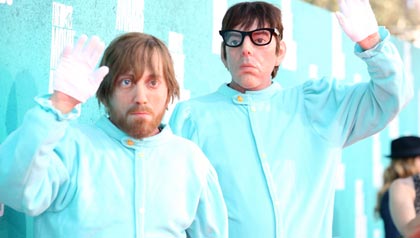 The Black Keys prove that some things still work; in their case, it's the shotgun marriage of country music and the blues. You can hear hints of hip-hop in the percussion syncopation on "Tighten Up." But the song's mumbled vocals, distorted guitar riff and gospel organ show that 50 years later playing with fire à la the Rolling Stones continues to drive us out of our heads.