As the publicity machine that's promoting his new album, The Singer, winds into high gear across the United States, Art Garfunkel is walking. And then walking some more. Specifically, he's walking across Europe.

"I'm in northern Greece," he says by phone. "Heading down toward Thessaloniki. It's an unusual choice. There are mountains. Very pretty, but nobody comes here." 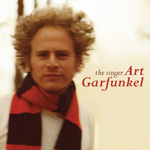 From Art Garfunkel's new collection, The Singer, one of two new songs, "Lena." The collection is due to be released Aug. 28.

Garfunkel is a long-distance walker. Over the course of 10 years beginning around 1995, he walked clear across the United States, one segment at a time. A few years later he began a similar trek in a generally southeastern direction across Europe, starting in Ireland.

"I'm an athlete on a mission!" he says, apologizing for his fatigue, which he seems to believe is more audibly noticeable than it actually is. Those who haven't heard Garfunkel speak in recent years are sometimes surprised by the robust, FM radio announcer quality of his voice. But listen to his two newly recorded songs on The Singer — a double-disc career retrospective — and there's no mistaking the ethereal, lighter-than-air quality that he's brought to his music from the earliest days of Simon & Garfunkel.

It's all the more remarkable when you consider that Garfunkel, who smoked most of his life, has in recent years been battling vocal cord paresis — a condition that forced him to back out of a planned Paul Simon and Art Garfunkel reunion tour two years ago.

In fact, just three weeks before our chat, Garfunkel says, he'd been fighting the condition while recording those tracks for the new album.

"I was struggling very hard," he says.

At 70, Art Garfunkel has had to face the possibility that his unmistakable voice of an angel is taking flight.

"So now it's very scary. The notion that it might not come back, that I might have lost my voice, is unacceptable," and you can almost hear his smile as he recognizes the obvious understatement.

"It stares at me like the Grim Reaper, saying 'Well, pal, little pieces of you are gonna go, you'd better get used to it.' Regaining my voice is my obsession."

Next: What's on Art Garfunkel's iPod? »

If Art Garfunkel never sang another note, the lineup of The Singer would seal his position as a premier vocalist of the past half-century. The 34-song program hopscotches through the decades, starting with "Bridge Over Troubled Water," then skipping to his masterful 1993 treatment of Jimmy Webb's "All I Know." The songs are arranged to contrast and complement each other, inviting the listener to actually pay attention — a challenge Garfunkel says is sadly missing from too much music today.

"Does anybody listen to anything?" he asks. "Is music now just stuff that's part of the distraction? I've got to believe that there is somebody who gets caught up in the act of being held by something that's good and captivating. I want to be the singer who can hold someone for a second song, and even a third."

Garfunkel is not a fan of the "shuffle" feature on today's music players. On his megawalks, he does indeed take along an iPod, but he has devised a specific 160-track sequence that helps him warm up, hit his stride and then cool down, both physically and vocally. So if you're fortunate enough to be strolling along behind Art Garfunkel on one of his continental walkabouts, you'll get to hear him singing along with his own personal soundtrack.

Surprisingly few of those songs are his.

"Is that iPod in there?" he says, rustling through something. "Here it is."

Now Garfunkel is scrolling through his playlist of instrumentals, vocal warm-ups, rock, blues, jazz, comedy, poetry and pop, providing commentary along the way.

Steven Bishop — "Warm-up vocal exercises he gave to me."

Everly Brothers — "I stick with their album Songs Our Daddy Taught Us. First I sing Don's part, then I go to Phil's part."

Art Garfunkel — "Let's fall in love …" he croons softly, sampling one of the standards from his 2007 album, Some Enchanted Evening.

Does anyone ever stop and stare at the familiar-looking man walking along the roadside singing with one of the world's most recognizable voices?

"No, I keep it temperate," he says. "There are very few people who are passing me. I'm in a world of my own."

You may also like: Great summer songs of the 1960s.