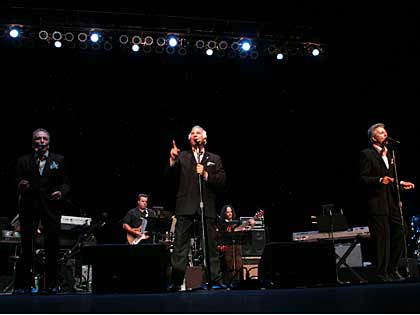 Jay Siegel and the Tokens performing at the Bethel Woods Center for the Arts in July 2007 in Bethel, N.Y.

If you think that doo-wop — the popular vocal-based music that swept through high school gyms, street corners and malt shops in the 1950s and ‘60s — is just a cultural artifact, you're simply out of touch.

All over the country, performers and shows are carrying the torch of doo-wop, rhythm and blues, and harmony:

• Do you love doo-wop and Motown? Join the Motown (Rhythm & Blues) Music group. Do

• On Aug. 28, Jay Siegel and the Tokens will be on stage at the Wolf Trap Foundation for the Performing Arts in Vienna, Va., wimowehing through “The Lion Sleeps Tonight” and sharing a bill with other doo-wop stars, such as Charlie Thomas of the Drifters and the Flamingos.

• On Sept. 3 and 4, Motown greats the Temptations and Four Tops will perform at the Tropicana Casino & Resort in Atlantic City, N.J.

• On Sept. 11, the Chantels will headline a roster of doo-wop performers at the Philadelphia DooWop Festival (Philly is a doo-wop stronghold).

In its heyday, did anyone think that two generations later the same tunes would again draw the crowds? Not Jay Siegel. “If you had asked me 50 years ago if I thought I would still be on stage singing these songs, I’d have said no way,” he says.

Thanks for the memories
Doo-wop groups first gathered on street corners where a few guys would harmonize a cappella or in the high school gym where the acoustics were better. Black artists such as the Spaniels, the Drifters and the Moonglows were followed by white groups such as the Skyliners, then Italian subgroups such as Dion and the Belmonts. The British Invasion in the mid-1960s and changing tastes brought an end to doo-wop dominance, but it clearly never left the hearts of many fans and collectors.

The first PBS TV show on the music, Doo Wop 50 in 1999, was a record breaker and the highest-grossing pledge show in PBS history. The network has turned its doo-wop shows into a fundraising machine with plans to continue into 2012, with Rock, Pop and Doo Wop in March 2011 and The Last Doo Wop Show on Earth, scheduled for December 2012.

“The PBS series certainly help in branding the doo-wop shows,” he says. “But I’ve been doing this since the 1970s when I worked with the Drifters and the Skyliners.”

The longevity of the music doesn’t surprise him. “The music was their first love,” he says, talking about the show’s audience. He thinks it reminds people of when they were more innocent and so was the world around them.

Siegel agrees: “It brings people back to a much happier time when you didn’t have to worry about oil spills and mortgages and taxes — all you had to worry about was if you passed your test and if you had a date for the weekend.”

For others, it was a new sound that was a welcome change from the big band music that preceded rock ‘n’ roll. “It was the music from my preteens, a reaction to Frank Sinatra and all that,” says Rem Rieder, editor of the American Journalism Review and a fervent doo-wop fan. “My mother had a heart attack when she heard what the Spaniels did to ‘Stormy Weather.’”

As fresh as ever
Otis Williams, the last surviving original member of the Temptations, says he remembers well when doo-wop was king.

"That music reminds us of all the incredible times we had then," he recalls. "When I see the PBS shows, I have to stop and watch someone like Ben E. King sing 'Stand by Me' and I think, ‘How many times did my group perform that song?' "

Rieder says doo-wop sustains him in a way that classic rockers like the Rolling Stones and others just don’t do anymore. “Doo-wop and R&B are just as fresh as they ever were,” he says. “I could hear ‘At My Front Door’ by the El Dorados every day for the rest of my life and be fine, but I would hate to have to listen to ‘(I Can’t Get No) Satisfaction.’”

Here to stay
While much of the audience falls squarely in the boomer ranks, the younger generations also love the music. “I look out and see an audience that goes from 6 to 80,” Williams says. And the Tokens’ most famous hit got a new lease on life when it was used in The Lion King in the mid-1990s. Almost instantly, “The Lion Sleeps Tonight” was an international hit all over again and beloved by 6-year-olds around the world.

But it is the nostalgia for the music of one’s youth that seems to have hit a chord on TV, at live shows and on Broadway. Stories of early rock ‘n’ roll have become bona fide Tony winners, such as Jersey Boys, which is about Frankie Valli and the Four Seasons, and this year’s Million Dollar Quartet, which is about the recordings session of Elvis Presley, Jonny Cash, Jerry Lee Lewis and Carl Perkins.

The doo-wop audience is a passionate audience. “As long as they keep on coming, we’ll keep on singing the songs,” Siegel says.

And that’s all a fan can ask.