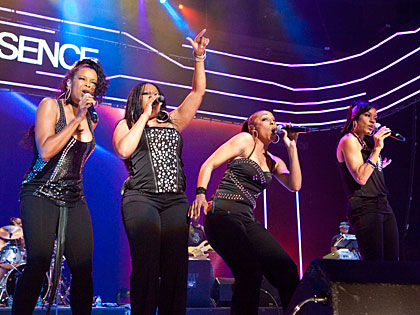 En Vogue reunites to perform during the 2009 Essence Music Festival.

It’s one thing to acknowledge that you’re getting older. It’s quite another to become one of the public faces of AARP. But getting down with recording stars like Janet Jackson, Alicia Keys and the ever-youthful Earth Wind & Fire shouldn't make anyone feel old. Just ask James Brown.

Come celebrate with AARP and find out how to win free prizes, including ESSENCE Music Festival tickets, and collectors' pins and fans!

Before signing on as AARP's Community Ambassador, the former star athlete and television sportscaster — who says he is celebrating his “ninth year of being 50” — figured that he wasn't the typical AARP member.

“I was so wrong," he said recently. "This organization is for people exactly like me.”

And that’s the message Brown and other celebrities hope to bring to New Orleans this weekend during the 2010 ESSENCE Music Festival and expo.

As an official sponsor of the festival, AARP is trying to build on its recruitment and African American outreach programs. Besides Brown, other personalities presenting in the AARP booth are B. Smith, restaurateur, author and television host; Julianne Malveaux, economist and president of Bennett College; Malik Yoba, actor and activist; and Marita Golden, author.

"Part of our African American outreach strategy is linking AARP to 'iconic' brands that are highly esteemed and valued in the black community," said Edna Kane-Williams, AARP vice president of Multicultural Outreach. "Few rival the stature and presence of the ESSENCE Music Festival. It has become the single largest African American musical destination event in the world. To be a major sponsor, and to be so visibly involved, will clearly demonstrate our commitment to the African American community."

The ESSENCE Music Festival is more than a concert; it's practically a reunion for the 400,000 people who descend on New Orleans every Fourth of July weekend. Beginning in 1995 as a way to celebrate the magazine's 25th anniversary, the event has become a cultural watershed for African Americans and New Orleans.

"Hopefully [festival attendees] will see what AARP really has to offer, beyond stereotypes," said Brown. "Folks aren’t retiring as early as they used to. It is about being as active as you possibly can. I can only hope [through recruitment efforts] that over time an influx of active folks will influence other folks to join and see many of the tremendous benefits."

JB cites his mother as a good example: "She is the reason why I’m involved. She was an active card-carrying member of AARP. One way she was able to enjoy her quality of life was reading The Magazine and staying on top of issues, but also using the organization’s resources to help with her diabetes. Those over the age of 50 can still enjoy the quality of life. Seeing how involved and active she was encouraged me."

"What AARP has to offer to African Americans is so valuable, regardless of age," says actor and activist Malik Yoba. He should know. He's 36.

"Don’t tell anybody, now!" jokes the star of Why Did I Get Married and New York Undercover. "Seriously, I’ve admired AARP for a long time. The resources and community spirit I get from the organization is why I wanted to be involved."

A staunch proponent of community service, Yoba says he hopes many African Americans will use AARP's vast membership network to find volunteering opportunities — another benchmark for the organization's black community outreach initiative.

"It doesn't take a lot of time. Helping to run or found a small group or just being kind to someone. You have no idea what a difference you can make with one small thing," he said. "There's always an opportunity."

The ESSENCE Music Festival runs from July 2 to July 4 in New Orleans. As an official sponsor, AARP presents the Sunday Gospel program. Headliners of the main event include Janet Jackson, Gladys Knight, Charlie Wilson, War, and Mary J. Blige among others.