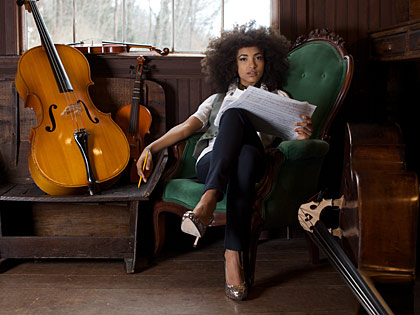 Esperanza Spalding stops by The Second Cup Café for a quick performance.

With three distinctive albums behind her, Spalding has been collecting kudos from admirers as different as jazz icons Wayne Shorter and Pat Metheny, and President Obama, who invited her to play at the 2009 Nobel Peace Prize Concert. A gifted bassist, singer and bandleader at 26, she's been paying her dues for more than a decade.

"The nomination was so unexpected — but cool," gushes Spalding, who will also co-host the Grammy pre-telecast ceremony with singer Bobby McFerrin. "The good news is that somebody said, 'Hey, you're more than just in that adult contemporary jazz niche,' "

Spalding graduated from and now teaches at the Berklee College of Music in Boston and says she still sees herself as a student. "I am not deceived by all the hype and attention I'm getting right now," she says from her Austin home, where she was planting Texas bluebonnets in the garden. "I seriously see myself as a jazz student — and I still know nothing. You know, it takes decades. So all the people I'm blessed to work with are my mentors." These would include once and future bandmates such as Patti Austin, Stanley Clarke, Terri Lyne Carrington and former Berklee teacher Joe Lovano — a master's course indeed.

Raised by a single mother in Portland, Ore., Spalding was a home-schooled prodigy who played violin in the Oregon Chamber Music Society from age 5 to 15, when she became concertmaster. She soon picked up the acoustic bass, a discovery she has famously compared to "waking up one day and realizing you're in love with a co-worker." She recorded two albums with the rock band Noise for Pretend while studying with trumpeter Thara Memory at Portland State University, and also received an on-the-job crash course for two busy years.

"The luxury of being a bassist is that people always need them," she says. "I ended up in a lot of situations where people desperately needed one. I certainly wasn't qualified, but I did my best to prepare, showed up on time, played in tune, kept the time straight, and, if they needed someone again, I'd get called back."

Released in 2006, Spalding's debut album, Junjo, was an enchanting group effort on which Spalding plays bass and vocalizes wordlessly with Cuban pianist Aruan Ortiz and drummer Francisco Mela. She covered a lot more ground on her well-received 2008 sequel, Esperanza, on which she sings in English, Spanish and Portuguese.

Last year's Chamber Music Society is Spalding's most recent project. A Manhattan performance in the fall began with the bassist relaxing in an armchair at the corner of the stage, sipping a glass of wine and savoring the sound of the string trio she soon joins, along with a pianist and drummer. Fusion at its finest, Chamber Music Society blends Spalding's classical background with flighty improvised vocal excursions, solid original balladry such as "Apple Blossom" and a moving take on Dimitri Tiompkin's "Wild Is the Wind."

Spalding views her Grammy nomination as an unexpected preview of what will be her next project. Radio Music Society, she explains, will focus on "the part of me that likes to get in the car on a sunny day and sing along to something that has nothing to do with hipness or a dead idiom," meaning jazz. And if on Sunday she beats out a bunch of pop stars for a Grammy, all the better.

"At least when my next record comes out it won't be like, 'Wait! You've betrayed us!' "