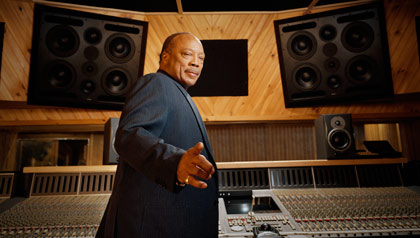 Quincy Jones remembers living in Chicago as a kid during the Great Depression when, he says, the city's African Americans "bought music before they bought clothes or food." That intense hunger for soul-filling sounds is what continues to inspire the legendary music producer, 77.

Last fall, in addition to dropping his album Q: Soul Boss Nova and debuting a line of signature headphones by AKG, Jones released a coffee-table book, Q on Producing. In the book (the first in a three-part series written with Bill Gibson) Jones dispenses advice to aspiring musicians and discusses various recording techniques he mastered while producing hits for music greats such as Frank Sinatra, Michael Jackson, Paul McCartney and Aretha Franklin. Over the last half-century, Jones has sold hundreds of millions of records and collected more than two dozen Grammy Awards. He's also scored Oscar-winning films and created hit TV shows. He chatted by phone from his home in Bel Air, Calif.

Q: Why do you continue to work at such a furious pace?

A: It's just a passion for what I do. I learned early that excellence is not an act; it's a habit. All the way back to being a teenager, setting bowling pins or picking strawberries, I said, "I want to be the best that ever did it."

Q: In Q on Producing you take readers inside the studio to discuss your creative process.

A: There are so many different sides to being a producer. It's a complicated process. You're dealing with the psychology of it, the emotion of it, the technical parts. In the beginning, I wasn't really sure what it was all about. When I worked with Lesley Gore [he produced her No. 1 single It's My Party in 1963], I didn't get paid a cent because I didn't know producers got paid [laughs].

Q: Years later, you were also told you'd never get Steven Spielberg to direct The Color Purple. As that film's producer, you helped discover Whoopi Goldberg and Oprah Winfrey, who had never acted before. Did you have any idea Oprah would become the most powerful person in television?

A: I saw it in her. She tells people when I saw her I said, "Your career's so bright it burns my eyes." I've had a gift. I can't drive a car but I found all these people: Marvin Hamlisch, James Ingram, Brothers Johnson. [Jones was one of the creators of The Fresh Prince of Bel Air, which started Will Smith's acting career.] If something's there, I can feel it.

Q: You produced three of Michael Jackson's biggest albums: Off the Wall, Thriller and Bad. Where were you on June 25, 2009, when you got the news that he had died?

A: I was coming back from a film festival in Shanghai and we stopped in Luxembourg, where Grand Duke Henri had a band greet us at the airport. On the way into town they said, "By the way, Quincy, Farrah Fawcett, Ed McMahon and Michael Jackson just died today," and it was like a shotgun went off in my head. They were all friends of mine.

Q: Did you know Michael was addicted to prescription pills?

Q: What did you love about Michael?

A: I loved his essence, his perception, his drive. He had a lot of stuff. Michael was smart, too. He'd study all the giants of the past, from Fred Astaire to Gene Kelly to Bojangles to Sammy Davis.

Q: I read that one of the highlights of your career is working on the 1966 live album, Sinatra at the Sands.

And Frank singlehandedly changed racism in Vegas. It was so racist back then Nat Cole and Harry Belafonte, Lena Horne too, had to eat in the kitchen, and stay across town. They couldn't go in the casino. This is in '64! And when Frank invited us [Basie and his orchestra, conducted by Jones] to Vegas, he put "guys" with each member of the band and said, "If anybody looks at them funny, break both their legs."

Q: Do you have any unfulfilled ambitions?

A: Not many. I've got some projects I want to do. I'd like to write more songs. I did a lot of orchestration but I didn't write as many songs as I would've wanted to write. But I'll get to it.