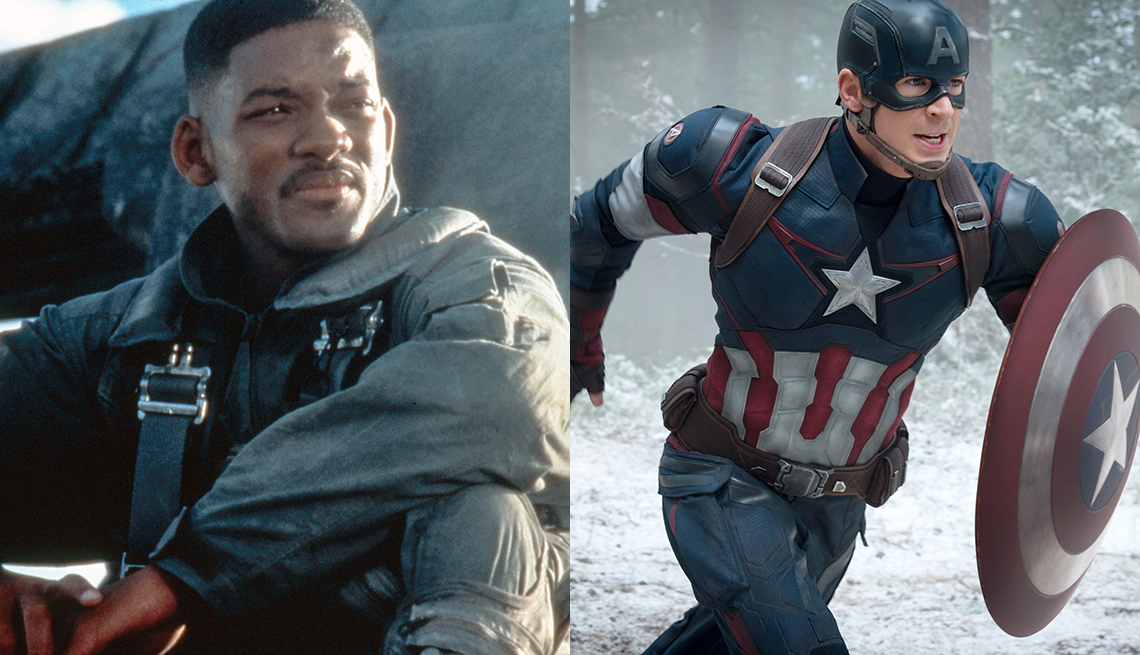 En español | After the last burger's been flipped and the final firework has fizzled out, what could possibly be better than settling in with a patriotic movie to remind you of the real meaning of the Fourth of July? From Steven Spielberg's inspiring Lincoln biopic and the quiet heroism of Hidden Figures to Will Smith's blockbuster turn defending the White House from aliens in Independence Day and Chris Evans as Captain America, we've got 18 great films that are just perfect for the long weekend. Happy Independence Day, America!

Lin-Manuel Miranda's long-running, impossible-to-get ticket on Broadway will be exclusively available to stream on Disney+ beginning on July 3. And it's hard to imagine a better way to experience what it means to be an American. A taped production of Miranda's historical hip-hop hit musical, Hamilton (for those who have been living under a rock for the past five years) tells the story of Founding Father Alexander Hamilton through a modern, from-the-streets lens).

Where to watch: Disney+

Denzel Washington, Morgan Freeman and Matthew Broderick star in this heroic account of one of our country's overlooked Civil War chapters — the story of the all-Black 54th Regiment of the Massachusetts Volunteer Infantry. Washington's quiet intensity and fiery courage send a chill up your spine in this important, urgent historical corrective from director Edward Zwick.

Daniel Day-Lewis deservedly won his third Oscar for his eerily transformative portrayal of our 16th president. Directed by Steven Spielberg, this epic in miniature doesn't try to capture the full, cradle-to-grave sweep of Lincoln's remarkable life; rather it zeroes in on his battle to pass the 13th Amendment, abolishing slavery. A modern American masterpiece.

Some American heroes are household names out of the gate (see Lincoln, Hamilton and the Mercury astronauts); others do their jobs in anonymity until history hopefully discovers them. In this inspirational true-life drama about a group of Black female mathematicians who toiled in obscurity for NASA during the space race, Octavia Spencer, Janelle Monáe, and Taraji P. Henson soar below the radar as the brains behind one of NASA's greatest moments.

The combination of Steven Spielberg and Tom Hanks would seem to be an Independence Day match made in heaven. And so it is with this harrowing and humane WWII film. Kicking off with the D-Day assault on Normandy (rendered with almost unbearable white-knuckle realism), Saving Private Ryan shows us a small group of soldiers embarking on one noble mission when all around them is chaos and confusion. Is this the greatest WWII movie ever made? Maybe, maybe not. But I have a hard time thinking of a better one.

Tom Cruise earned his first Oscar nomination for playing Ron Kovic, the real-life paralyzed Vietnam vet and anti-war protester, in Oliver Stone's searing morality play. Full of heartache, sorrow and righteous anger, Born on the Fourth of July is not only a showcase for its leading man, who until then had been pigeonholed as nothing more than an easy-on-the-eyes movie star, it's also a reminder that sometimes disagreeing with your country can be the ultimate expression of patriotism.

RELATED: Not only did AARP critics name the Top 10 Tom Cruise movies, they ranked them. Get the whole list and where to stream them here.

As divided as our nation was in the 1960s, the one thing that seemed to unite us was our quest to explore the heavens. Based on Tom Wolfe's novelistic account of the triumphs and failures of the first wave of daredevil Mercury astronauts, director Philip Kaufman's epic is a reminder of America's ingenuity and ambition. A star-studded cast that includes Ed Harris, Sam Shepard, Scott Glenn and Dennis Quaid doesn't hurt either.

Like all birthdays, the Fourth of July is an opportunity to reflect not only on where we're going but also on where we've been. Sometimes that sort of reckoning can be both painful and hopeful. Take director Ava DuVernay's Selma — a stirring and beautifully realized re-creation of Martin Luther King Jr.'s 1965 march from Selma to Montgomery. This is a powerful (and necessary) film about how far we have come and how far we still have to go.

Is this the greatest movie from the banner Hollywood year of 1939? Well, with The Wizard of Oz, Gone With the Wind and Stagecoach, it's no easy call. But it's definitely the most inspiring, thanks to Jimmy Stewart's indelible performance as an idealistic young senator who refuses to compromise his homespun principles for jaded political expediency. Directed by Frank Capra, no stranger to stories about the American everyman, this is a movie that will restore your faith in democracy.

Arguably the best installment in the first wave of Marvel movies, this red-white-and-blue origin story about how WWII G.I. Steve Rogers became Captain America has a pulpy realism and lack of flash that feels like an antidote to the superhero adventures to come. Chris Evans's solo coming-out party as the patriotic Cap pits him against the evil Hydra, but it also somehow manages to feel like a lost Gary Cooper film.

The alpha and omega of Hollywood summer blockbusters, Steven Spielberg's Great White adventure pits three men (Roy Scheider, Richard Dreyfuss and Robert Shaw, as the Ahab-like Quint) against nature's deadliest killing machine. This is a master class in suspense and white-knuckle terror, and it reaches its climax over the Fourth of July weekend, when Amity Island's craven mayor (played by an indelibly amoral Murray Hamilton) argues against shutting down the beaches despite overwhelming evidence to the contrary.

Is it preposterous? Sure. But this Nicolas Cage historical caper is also a perfect popcorn movie in its own escapist way. Cage plays a modern-day Indiana Jones-style treasure hunter, armed with loony conspiracy theories instead of a bullwhip and a fedora. His mission: to find America's most sacred historical artifacts, including the Declaration of Independence, which it turns out, contains clues about more than just life, liberty and the pursuit of happiness.

The great James Cagney stars as composer-playwright George M. Cohan in this lighthearted, Horatio Alger-like musical about a Broadway star who travels to the White House to be honored by the president. Along the way, he reflects on his life, which is brought to toe-tapping life with renditions of “You're a Grand Old Flag” and “Over There,” as well “Give My Regards to Broadway."

Yes, Top Gun fetishizes Reagan-era military might (not to mention its F-14 hardware) with all of the razzle-dazzle of an MTV video, but if you squint a little harder it's also a testament to a special kind of American hero — the kind of courageous fighter pilot who lives on adrenaline and “the need, the need for speed.” This is the movie that turned Tom Cruise into Hollywood's biggest star, and it's easy to see why with his thousand-watt smile, undeniable charisma and rebel-without-a-cause cockiness.

Tom Hanks won his second Oscar in a row playing this lovable 20th-century Candide, who manages to pop up at just about every important moment of his era, becoming a uniquely American sort of hero in the process. Directed by Robert Zemeckis, this best picture winner offers everything you could possibly want on the Fourth of July — generous helpings of kindness, guilelessness, and boomer pop-culture recalls, with a dash of feel-good whimsy.

Before there was Hamilton, there was 1776. The hit Broadway musical about the struggle to declare America's independence at the Continental Congress, stars William Daniels as John Adams, Ken Howard as Thomas Jefferson and Howard Da Silva as Benjamin Franklin. Don't go in expecting Lin-Manuel Miranda's lyrical wizardry: This is a different kind of film entirely. But it's witty, sharp and well worth your time.

American heroism isn't always defined by gold medals, blue ribbons and triumphant victories. Sometimes heroism just means using your wits and a slide rule to get back home in one piece. In Ron Howard's edge-of-your-seat chronicle of one of NASA's near-disastrous missions to the moon, Tom Hanks, Kevin Bacon, and Bill Paxton play real-life astronauts Jim Lovell, Jack Swigert and Fred Haise, who managed to skirt death against all odds. They were American heroes, one and all.

Don't mess with the Stars and Stripes — or blow up the White House, for that matter! That's the rah-rah message that turned this tongue-in-cheek Will Smith/Jeff Goldblum alien invasion spectacle into one of the biggest summer blockbusters of the ‘90s. Come to see Smith punch an alien in the face; stay for Bill Pullman's stirring Fourth of July speech as the U.S. president.