(Video) 'Mission Impossible: Rogue Nation' Movie Trailer: Ethan and team take on their most impossible mission yet, eradicating the Syndicate.

Let's hope his old fans rediscover him in Mission: Impossible: Rogue Nation, his fifth turn as Ethan Hunt, a character that he has firmly imprinted as his own.

As in at least two previous installments of the series, which dates to 1996, Ethan has to go rogue after being falsely accused of malfeasance. This time the Impossible Missions Force is being disbanded by the U.S. Senate at the insistence of the CIA director (Alec Baldwin), who's had enough of the IMF's combustible hijinks. Most egregiously, Ethan has been spending department time, money and firepower tracking a mysterious organization of international evil known only as the Syndicate — a group the CIA is convinced exists mainly in Ethan's fevered imagination. 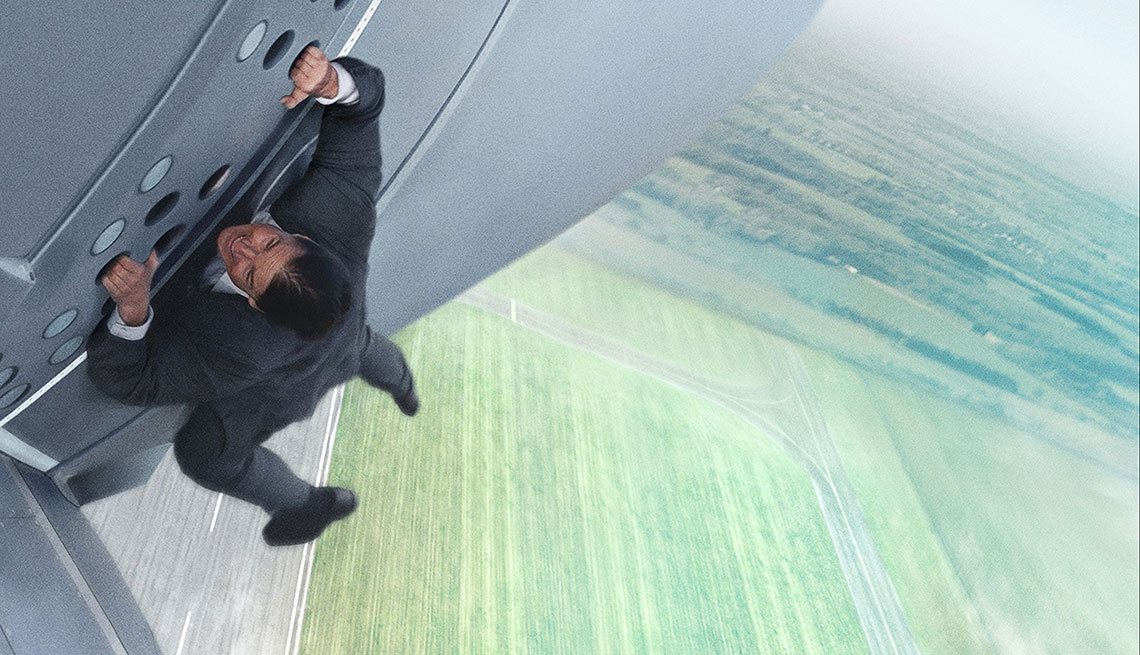 Tom Cruise hangs on through another 'Mission Impossible' movie.

Well, you know how that goes in these films: Ethan disappears from everyone's radar and starts cracking the case on his own — albeit with a little help from his friends who are still inside the system (Simon Pegg, Jeremy Renner and Ving Rhames). Complicating things is the presence of a beautiful and deadly agent named Ilsa (Rebecca Ferguson), who may be working for British intelligence. Or is she in cahoots with the Syndicate? (Yes, it does exist.) Its mastermind is played by an incredibly creepy Sean Harris.

That's the plot, folks — and it exists solely to provide a backdrop against which Ethan rides through Morocco on a killer motorcycle, slides down a 10-story rope line in Vienna, dives into an industrial cooling system while trying to hold his breath for three minutes and, in a pulse-pounding opening sequence, holds on to the side — the outside — of an ascending airplane by his fingertips.

It all sounds like superhero stuff, but Cruise has crafted an appealing kind of boyishness for Ethan: Rather than reveling in derring-do, he's more likely to appraise a situation and, seeing no other way out, sigh and shrug helplessly before leaping into the breach. Even as he launches into his trademark Tom Cruise sprint — arms pumping, hands held flat and bladelike, as if to reduce wind resistance — the 51-year-old star is not running away from his age. His Ethan gets winded a lot easier than he used to, and he gets the worst of a fistfight with greater frequency. On the other hand, he recovers speedily from a near drowning here, and (with the exception of Sean Connery) no one ever looks better in a tuxedo than Tom Cruise.

Three years ago Cruise bravely tore up his customary playbook to star as a vain veteran rock star in Rock of Ages. Fans yawned. Last summer his mind-bending sci-fi war picture, Edge of Tomorrow, was widely recognized as one of the best pictures of the year. Moviegoers ignored it. Even now, as he allows Ethan to age in place, Cruise is taking chances with his bread-and-butter character. That deserves some reward.

For my money, the best of the Mission: Impossible films is still the first — the one where director Brian De Palma stopped our hearts as Ethan dangled silently over a computer keyboard. The Who's Who of directors since then — John Woo, J.J. Abrams, Brad Bird and now Christopher McQuarrie (he won an Oscar writing The Usual Suspects) — have increasingly developed the series into unrelenting sequences of action set pieces.

But it's summer, and it's Tom Cruise. What more did we expect?