There — we got that out of the way. This is neither the first nor the last place you'll see a movie reviewer draw a direct line from Groundhog Day (the classic Bill Murray comedy about a man forced to live the same day over and over) to Independence Day (the landmark Earth-versus-aliens shoot-'em-up) to Edge of Tomorrow (the new Tom Cruise sci-fi thriller).

On paper, the story of a soldier who must keep getting killed in battle — then reliving that awful day until he finally learns to survive it — sounds more gimmicky than Frontier Sales Days at Honest John's Used Cars. But in the hands of a team with impeccable pedigree, Edge of Tomorrow is sooo much better than it has any right to be. It almost feels as if someone is cheating. 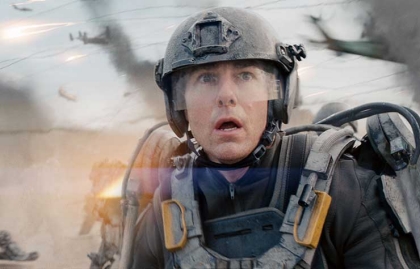 Tom Cruise returns to the big screen (and over and over again to life) in "Edge of Tomorrow."

In an opening cable-news montage, we learn that Earth has been invaded by an alien army. They've already conquered Europe and are threatening to take over the world. Inserted among the array of talking heads is a U.S. Army information officer named Cage, smirking and too cocky by half. It takes a couple of glimpses before we realize Cage is played by Cruise.

Cage talks a good game, but when it comes to actually taking part in the invasion of Europe, he's a washout; he gets blown away almost as soon as he hits the beach. But his final close encounter with an alien yields an unexpected result: The moment he's killed, he awakens the day before the invasion. At first his endless sequence of wake-fight-die seems like a season in hell, but soon he sees that his cycle of experience is giving him a distinct advantage on the battlefield. And when he meets a fellow soldier (Emily Blunt) who has suffered the same fate, the two team up to put an end to the war once and for all.

For director Doug Liman and his three-man writing team, the tough assignment here was to portray Cage's repetitious cycle without being, well, repetitious. By the time we're an hour in, the film has established a thrillingly effective shorthand: A fragment of a line we've heard before and a glimpse of a boot against a familiar background are all we need to establish the re-passage of time. But there are no exact replays: Each shade of difference in response to a new approach from Cage not only moves the plot forward but signifies the subtle ways even the smallest gesture can affect the direction of our lives.

Liman is the perfect director for this enterprise. When he made Jon Favreau's Swingers (1996), he established himself as a master of tightly focused yet loose-limbed character study. With The Bourne Identity (2002), he held the reins on one of the decade's best action thrillers.

The tricky script for Edge of Tomorrow is delightfully rendered by Christopher McQuarrie (who wrote Cruise's better-than-you-think Jack Reacher), along with playwright Jez Butterworth and his brother John-Henry. I'm not sure the final outcome jibes perfectly with the universe the writers have created, but I'm willing to live with it.

Best of all is Cruise, who gives a wonderfully modulated performance as a self-absorbed media darling suddenly facing the unwelcome realities of war. He is laugh-out-loud funny in the early sequences. He also earns audience sympathy points when, lining up with a platoon of beefy warriors, he milks some laughs from his famously — though usually camouflaged — short stature.

Blunt is a force of nature as Cage's fellow warrior, and Bill Paxton is fun as the master sergeant who must deal with Cage's eerie knowledge of even the smallest thing about to happen.

Like those old TV ads about the breath candy that was two mints in one, Edge of Tomorrow takes two well-worn movie plots and measures them out in perfect balance. When the inevitable copycats arrive in theaters a year or so from now, let's not forget the one that got it right the first time.