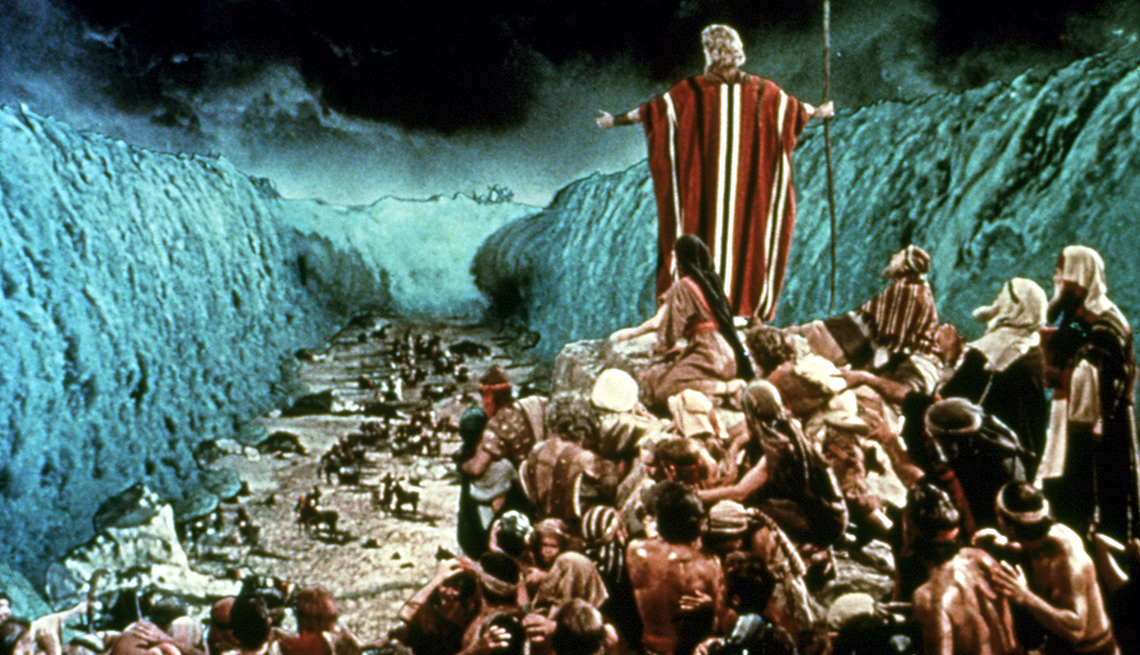 Charlton Heston parts the Red Sea in one of the most well-known biblical movies of all time, "The Ten Commandments."

En español | Hollywood is resurrecting the biblical epic, a genre with a unique blend of spectacle and substance: Son of God, the story of Jesus as told by the makers of last year's History channel miniseries The Bible, has grossed more than $50 million since it opened Feb. 28. Noah, starring Russell Crowe as a brooding ark builder, set sail March 28. And director Ridley Scott has cast Christian Bale as his action hero Moses in Exodus, shot in 3-D and due in theaters Dec. 12.

Also in the wings in Hollywood: films based on the stories of Cain and Abel, Pontius Pilate and David vs. Goliath.

Bible tales with big stars are nothing new, of course. Here are 10 fit for family viewing — no graphic violence (as in 2004's The Passion of the Christ) or excess lustiness (as in 1949's Samson and Delilah) in sight!

In the first film released in CinemaScope, Richard Burton stars as Marcellus, a Roman tribune commanding the soldiers ordered to crucify Jesus. His life, along with that of childhood sweetheart Diana (Jean Simmons) and slave Demetrius (Victor Mature), changes forever when Marcellus wins the Messiah's garment in a drunken game of dice. Time magazine called The Robe "ablaze with Technicolor and alive with romance, action and Biblical pageantry … Hollywood at its supercolossal best." The movie earned five Oscar nods but won only for costume design.

A top-notch Charlton Heston plays Moses, the adopted Egyptian prince who leads the enslaved Hebrews to freedom. Shown on ABC each spring, The 10 Commandments has become to Easter what It's a Wonderful Life is to Christmas. This final offering from the master of the film epic, Cecil B. DeMille, gave the director the chance to partly remake his 1923 silent version. Yul Brynner (Pharaoh Ramses) and Anne Baxter (Nefertiri) verge on kitsch, but it's hard to knock the predigital parting of the Red Sea.

Anthony Quinn is the imprisoned thief whom Pontius Pilate released after the crowd chose to save him over Jesus. After witnessing Christ's death and learning of his teachings, a guilt-ridden Barabbas ends up toiling in a mine, fighting as a gladiator and taking part in the burning of Rome. Filmed in Italy, the epic undertaking captivated audiences with its massive battle in a gladiator arena and a crucifixion sequence shot during an actual eclipse of the sun.

Nicholas Ray went from directing 1955's Rebel Without a Cause to this thoughtful portrait of a rebel with one. He artfully juxtaposed large crowd scenes (the Sermon on the Mount) with intimate moments between Jesus and Mary. The first mainstream film in English to show Jesus' face onscreen, King of Kings came under fire for casting Hollywood-handsome Jeffrey Hunter in the title role. Its reputation and influence have recovered nicely from those initial pans.

Read Movies for Grownups review of 'Heaven Is Real'

Director George Stevens went overboard in portraying the life of Jesus: overlong (the original cut exceeded four hours), over budget ($20 million, a record at the time) and overcast (Claude Rains as King Herod). Despite these missteps, there's much for modern audiences to savor: The film marked the first English-language appearance of Max Von Sydow, recruited for the role of Jesus, and the star cameos outnumber those in The Longest Day, from crooner Pat Boone as the angel at the tomb to John Wayne as an unnamed Roman centurion. (Stalwart as ever, the Duke intones: "Truly this man was the son of God.")

John Huston's ambition reached biblical proportions when he attempted this adaptation of the first 22 chapters of Genesis. The critics were less reverent, with the New York Times assailing its "lack of conviction." Watch it for Huston's performance as a kindly Noah and George C. Scott's as Abraham. Adam and Eve (Michael Parks and Ulla Bergryd) show up in the nude, but it's all very discreet, making the film appropriate for grade-schoolers and up.

The famously irreverent rock opera by Andrew Lloyd Weber and Tim Rice underwent a few resurrections of its own, from a No. 1 album in 1970 to a five-time Tony nominee on Broadway in 1971 to a box-office hit on the big screen two years later. Shot in Israel, the film centers on the clash between Jesus (Ted Neeley) and Judas (Carl Anderson) during the week of the Crucifixion. Despite its countercultural vibe, Superstar holds up surprisingly well today.

For those seeking a more extensive history, try this six-hour miniseries directed by Franco Zeffirelli. Jesus of Nazareth takes a naturalistic approach to the miracles and other events detailed in the Bible. Pope Paul VI himself had asked TV impresario Lew Grade to undertake the project, and the title role was initially considered for Dustin Hoffman and Al Pacino. The filmmakers wisely hired an unknown instead: British actor Robert Powell, whose deep blue unblinking eyes were a great asset on camera. The stellar supporting cast (Oscar winners Anne Bancroft, Ernest Borgnine, Laurence Olivier, Anthony Quinn, Rod Steiger and Peter Ustinov) proved a strong draw as well; 90 million U.S. viewers tuned in over two nights.

We can thank this animated musical for bringing the Oscar-winning devotional song When You Believe to our ears. The film was a pet project of Jeffrey Katzenberg's, whose then-fledgling DreamWorks defied the prevailing cartoon fare to bring us a stylized, hand-drawn representation of Moses and his destiny. More than 600 religion experts were consulted to ensure authenticity — but that didn't stop the studio from using Val Kilmer as the voice of both Moses and the Lord. The film took in $218.6 million worldwide.

This movie tried to personalize the relationship of Mary (16-year-old Keisha Castle-Hughes, an Oscar nominee for Whale Rider) and Joseph (Oscar Isaac, Inside Llewyn Davis) as the latter struggles with the news of her pregnancy and is later reassured by the angel Gabriel in a dream. Directed by Catherine Hardwicke, the film offers a rare female perspective on the events preceding the birth of Jesus. Reviews were mixed, but the New York Times gave The Nativity Story props for "finding a kernel of realism in the old story of a pregnant teenager in hard times."