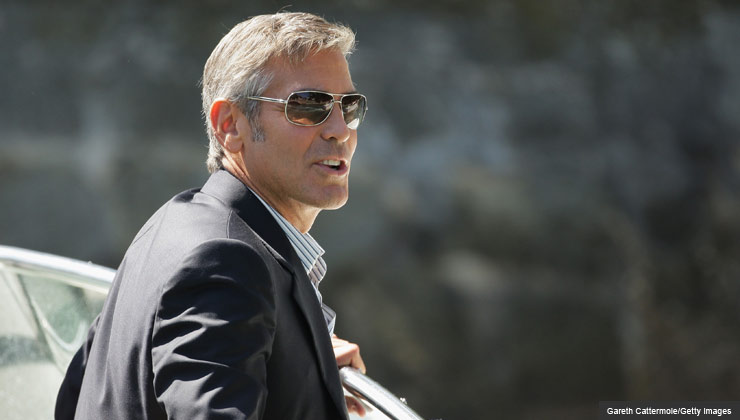 En español  |  When George Clooney left Northern Kentucky University to make his way in Hollywood some 30 years ago, his dad, broadcaster Nick Clooney, was concerned. He wanted George, youngest of two, to have a profession to fall back on. Nick need not have worried. Though George was the nephew of singer Rosemary Clooney (and lived with her family when he first arrived in Los Angeles), he made his own way — working in many a failed TV pilot or series before racking up the successes that would lead to movie stardom. Clooney celebrated his 50th birthday on May 6. Here's a look at his evolving career. Embassy Pictures/Courtesy of the Everett Collection

Clooney is young and cute in the NBC sitcom about a bunch of girls and their housemother. George plays a contractor, also named George, who is around a lot.  He was a regular and a recurring character for two seasons. His most admired quality at the time may have been his hair. Courtesy of the Everett Collection

Clooney was cast in ABC's Roseanne as Roseanne Barr's factory boss, Booker. It was a comedy but there was much drama on the set between Barr and her co-creator-producer. Clooney was happy to be gone by the second season. Courtesy of the Everett Collection

By the time he was a player on the NBC drama Sisters, Clooney had become head-turning handsome. He played a detective who meets Sela Ward's character — and gets involved — when he's investigating an assault on her daughter. Alas, his character is killed off, just in time for him to join the cast of an ensemble hospital drama NBC would take a chance on, ER. ER was not Clooney's show. Anthony Edwards was first on the actors' call sheet every day, the de facto leader of the troops. Clooney, whose ability to make women swoon was becoming increasingly apparent, was a loyal soldier and good friend to his cast mates, particularly Edwards, Noah Wyle and his on-again, off-again TV love, Julianna Marguilies. As pediatrician Doug Ross, Clooney was a tender-hearted womanizer who continually got himself in trouble with hospital authorities as he tried to do right by his little patients. Who wouldn't love a man like that? By the end of his five-year contract with ER, Clooney was making movies but he never considered trying to get out early. Yes, that's Clooney hidden in that Batman suit. Whoever thought that was a good idea? He was the third of the most recent Batmen following Michael Keaton and Val Kilmer — and not a great one by his own admission. He made the movie while still working on ER, which accommodated his schedule needs. It helped that Warner Bros. produced ER and Batman & Robin. DreamWorks/Courtesy of the Everett Collection

It was The Peacemaker, in which Clooney stars with Nicole Kidman, that really allowed him to test his mettle for movie making. It was on that set that he also bet Kidman that he'd never marry again (he and Talia Balsam divorced after a brief marriage) and he's still winning. Universal/Courtesy of the Everett Collection

This is the film in which Clooney's career really starts to sizzle. It was his first collaboration with Steven Soderbergh and it may be due to Soderbergh's direction that Clooney, who had great chemistry with Jennifer Lopez, would soon be seen as a movie star. He's much smoother and confident — and did we mention handsome? — than in some previous work. So much for handsome. Clooney took the opportunity to work with brothers Joel and Ethan Coen and O Brother was a typical Coen Brothers movie — strange and engrossing. Clooney had a good time and certainly played against the suave, hunky type he'd become. Released in June 2000, Storm was a summer blockbuster. Clooney is paired with Mark Wahlberg, not some pretty young actress. He plays the captain of a fishing boat who gambles on going for the bigger catch and gets caught himself. Clooney has a sense of Hollywood history and a connection — through Rosemary — to the heyday of singers such as Frank Sinatra, Dean Martin and Sammy Davis Jr. In Ocean's Eleven, a remake of the Rat Pack movie, Clooney and Soderbergh put together their pack of pals, including Brad Pitt, and Matt Damon, and, as George's love interest — Julia Roberts. Talk about a success. He made Ocean's Twelve in 2004 and Ocean's Thirteen in 2007. Most of his pack comes back for both. Clooney's reverence for TV history, stemming from his dad's career, is evident in this Oscar-winning movie. This was his step up to the big time. He co-wrote, directed and starred in the movie, which was nominated for six Oscars; he was nominated for writing and directing, and his lead actor, David Strathairn, is nominated for best actor. Clooney, who didn't believe in attending the Academy Awards unless he was a nominee, finally goes to the ceremony. Clooney makes the picture that will win him his first acting Oscar. Pudgy and bearded, he films in some tough circumstances and sustains an injury to his back during a fall on the set. DreamWorks/Courtesy of the Everett Collection

Clooney and Vera Farmiga are reminiscent of Tracy and Hepburn in this drama about Clooney's character, a traveling hatchet man who begins to question what he wants out of life. Both of them are nominated for Oscars; someone should re-team them — soon.