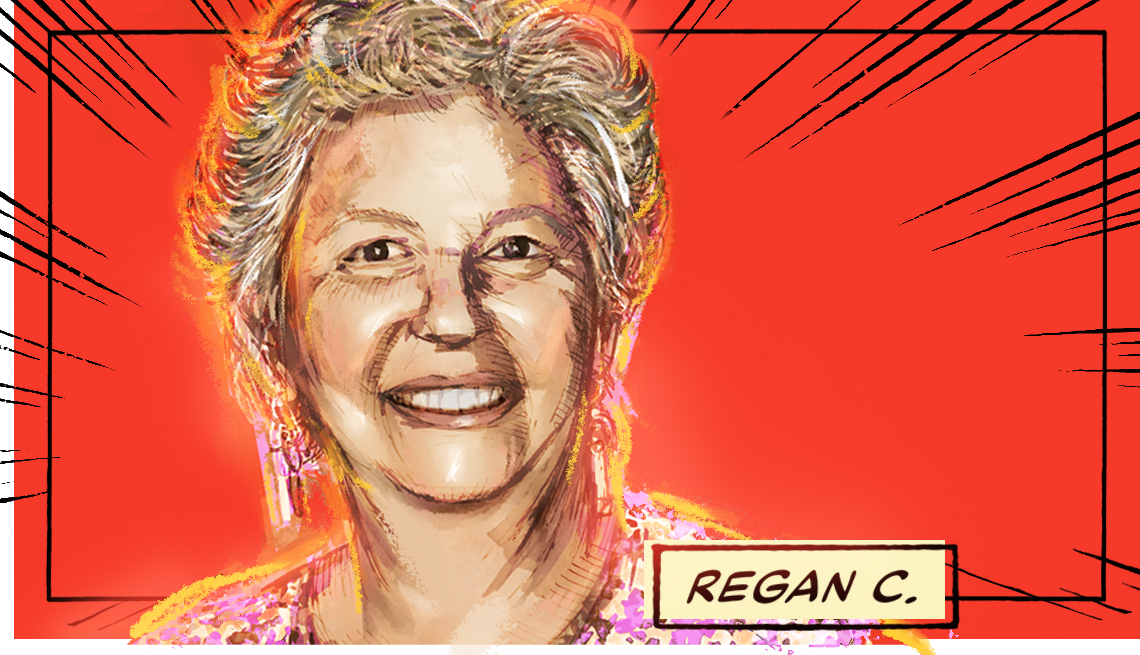 Name: Regan C.
Username: bayartist
Lives in: Mississippi
Games: Backgammon, Klondike Solitaire, Spider Solitaire, Pyramid Solitaire
When not playing AARP games I am: Working with clay in my studio and supporting my artist cooperative
Quotable quote: “I want to communicate with people who feel that they have a deficit of some sort. It can be depression, it can be the loss of a loved one—whatever it is, there are ways to pull yourself out of it. One small step at a time is going to get you there.”

“One of the most frightening things to hear from a doctor is, ‘Now you have to go home and find out who you are,’” says Regan C., a clay artist based in the Mississippi Gulf Coast. That’s exactly what she was told after she had a brain aneurysm in 2011. Games were a part of her recovery process—not just because of their brain-building benefits, but also because they helped her set small goals for herself. We talked with Regan about working with deficits, evolving identity, and making clay dance.

A holistic approach to brain health with brain games, healthy recipes, activities and the latest science

How did games help you in your recovery?

Tremendously. I had to find a small way to bring my thoughts back to focus. I like numbers, and I knew my brain needed to make new pathways. So I dashed around the internet trying to find something helpful and thought, “AARP will probably have something like that.” I played Klondike Solitaire, Spider Solitaire, Pyramid Solitaire and eventually Backgammon a lot during the first year.

I put together four or five games. One would be sort of moderate that I could win maybe 50% of the time, one that I’d win maybe one out of 10 times, and one I’d win almost all the time. Then I’d play another game that would give me a completely different way of working with numbers. I’d play one game and immediately go to the next, and I could feel my brain switching gears. It was really cool.

The real accomplishment was being able to play the game—any game—and listen to music at the same time. For several months, I couldn’t focus on the game if I had music on or if anything was going on in the background. So I kept pushing on that. Now I can listen to a song that has words in it and play at the same time, and that’s great.

What changed for you after the aneurysm?

I used to be very fast in my ability to recognize patterns and put things together very quickly. I’m not anymore, and I organize my life in a way that reflects that. I don’t play timed games, for instance, because that’s not going to work for me—well, every so often I do play Mahjongg, which is a timed game, just to check how I’m doing with speed.

If somebody asks me to do something and I’m not sure I can, I’ll look them straight in the face—and I would never do this before—and say, “I have to take time to think about that.” Sometimes I just have to let whatever it is roll around for days until I can say yes or no. Sometimes I explain, sometimes I don’t. I have to dance with that. I know that I will be able to make those decisions, that it will come together, and I have to have patience with myself. It’s been eight years, and I’ve seen that I can still organize my life just fine; I still have a good IQ. So I know that with patience, I’ll get there.

I’m incredibly grateful that I can do pretty much everything I did before. I can walk, talk, drive my car, run my studio with nine people in it, do all the bills, keep track of friends, manage the art cooperative that I’ve held together for over 20 years. Sometimes I don’t do everything so well—I’ll get caught up in details. But when I talk with other people, I find out that really, they’re feeling the same way. I just notice it more because of what I used to have, that’s all.

It was incredibly heartening when people would hug me and say, “It’s so good to see you. You really seem to be tracking all right—your voice is a little afflicted, but you seem to be you.” But when people would go, “Oh, nothing’s changed,” I knew that was not true, so it was frustrating. I’d say, “It’s like having a deck of cards and knowing that half of the deck of cards has been shuffled and you have no idea where they all are, but the other half is just the way you left them. And it’s very possible that one or two cards have dropped out.”

So, who am I now? I’m an artist. A teacher. A wife, a friend, a mentor. I’m somebody who loves to play cards. I like numbers. I’m concerned I’m a hoarder. There are all kinds of things that you could put next to me, but honestly, I don’t know who I am yet. Before my aneurysm, that answer would probably have been much more rooted in the ego. I got shook loose from that.

What was it like to return to the studio after the aneurysm?

When I went back to my doctor two weeks after I was released, he showed me a picture of the part of my brain that wasn’t working any longer. I recognized that that part of my brain was important to my artistic sensibilities. I knew, fundamentally, that things had changed.

I work in clay, so I can make a completely functional piece, like a bowl. If I want to go further than that—which I do—I can make sculptural pieces. So right after my aneurysm, I said, “OK, we’re not trying to make art right now. We’re going to make functional stuff, one step at a time. We’re hoping the art stuff will come back.” And the art part has come back.

What I try to do with clay is get it to stand up and dance. I want color that will touch something way inside and give people a sense of wonder and beauty. There’s a lot of giving up on my part—giving up trying to direct what a person is supposed to see. As long as I’m really true to my sense of color, shape, form, it gets appreciated. It’s all heart.

What would you like to tell other people who are recovering from an aneurysm?

Well, let’s back up a tiny bit: I want to communicate with people who feel that they have a deficit of some sort. It can be depression, it can be the loss of a loved one—it doesn’t have to be a physical thing like what happened to me. But whatever it is, there are ways to pull yourself out of it. One small step at a time is going to get you there. You’ve got to go, “Hey, I could do that one little bit—maybe I could do the next too.” Build yourself up so that you’ve got confidence in yourself again. You can find your own path. You just have to be willing to do it.

You also have to not be ashamed. Because then you can stand up and say, “OK, this is where I’m at now. Let’s deal with that.” Whatever condition it is that has given you a deficit, whether you were born with it or you had it pushed upon you, don’t be ashamed.

“If you set yourself up slowly, you’re building yourself up to win. With Backgammon in particular, the whole thing is to maneuver your coins into quadrants. As soon as you have three stacks of coins in your home quadrant, you can release them and start working on the loners. But if you throw all of your coins all at once into the introductory quadrant—that just ain’t going to work!”