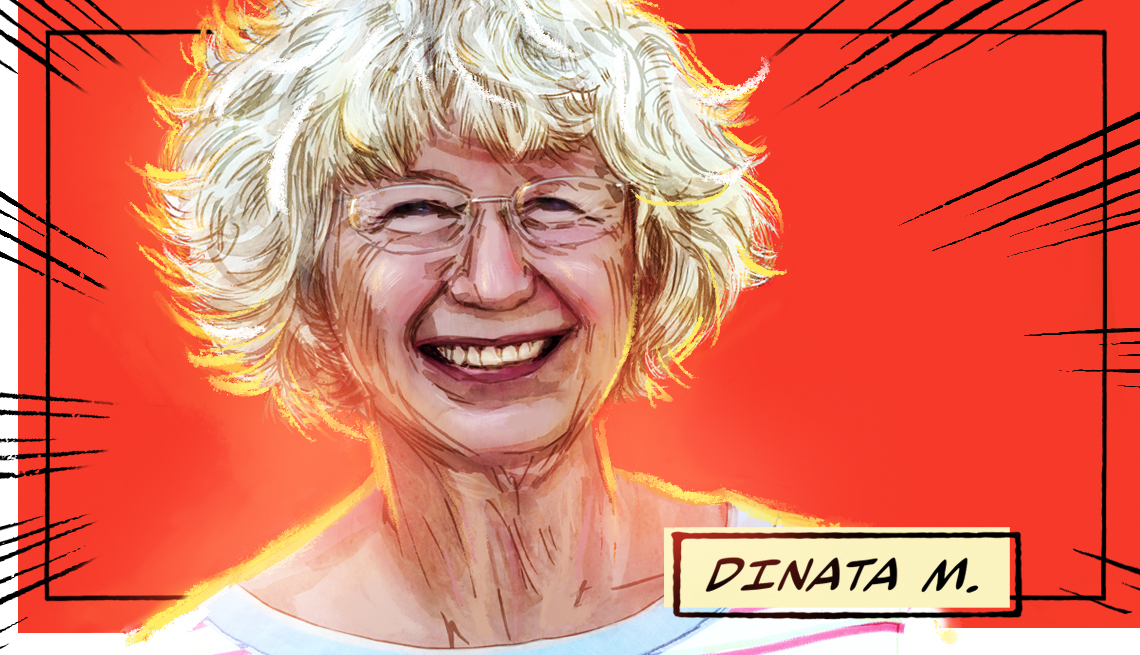 Name: Dinata M.
Username: Dinata
Lives in: Wherever the road takes her!
Games: 10x10, FreeCell Solitaire
When not playing AARP games I am: RV traveling across the U.S., blogging, writing and walking
Quotable quote: “I can’t stop blogging! Not that I want to.”

“We sold the house, sold the cars, sold the kids, the dog died, and we moved on the boat and went cruising,” writes Dinata M. on her travel blog. She may have retired in 2001, but she hasn’t stopped working. Her book, Big Creek: A Closer Look at a National Park, was published in 2017, and her husband refers to her as a “professional volunteer.”

Extensive travel—now from the RV she occupies with her husband several months a year—hasn’t kept her from her gaming, either. In fact, it’s a part of the routine she goes through to keep herself active yet relaxed. We talked with the traveler about strategy, focus and getting the rock star treatment.

If the open road is calling, find a variety of travel ideas and resources for your next trip.

I read in AARP The Magazine—or maybe it was one of the newsletters, I read those too—about playing games to keep your brain sharp, so I started playing. Once I get to where I think I’ve improved on one game, I’ll switch to another to try to learn new skills. I was playing one of the solitaire games for a while, and I noticed I was getting better, but I had no clue why—I wasn’t doing anything different, but I was probably learning subconsciously. So I started switching around to keep my brain trying to figure something out. And now 10x10 is killing me!

“Variety is the spice of life” is one of my slogans. Games, clothing, music—I like everything from bluegrass to opera. It’s the same with activities. Because it’s not just about playing games; it’s about learning skills. Some people learn a foreign language or a musical instrument. But I’ve never played many games before, so for me this was a likely candidate. I have a computer background, so I like to figure out strategies, how to put things together. It’s like a puzzle. I’m more obsessed with the strategy than my score.

What has gaming taught you about yourself?

Before retirement, I would lose all track of time, I was so focused on my projects. My husband can tell you that he would wait for me to meet him for lunch, and I’d forget it was lunchtime. I’d forget it was time to go home! Now, with the games, I really have to work to think about where I have to move the little blocks rather than just slap them in there somewhere. I have to work to keep myself on task.

I use the games as nightly relaxation, instead of a martini. But to do well on the game, you have to be focused and not let your mind wander, which isn’t always relaxing. So there’s a conflict there. Walking is more of a pure relaxation for me—it’s exercise, it’s something you don’t have to think about too hard, and I’m free for my mind to wander. Maybe it’s wandering over things you have to pick up at the store, errands we need to do, but also just daydreaming and trying not to be focused on something. That’s my idea of being relaxed. Walking is an unguided meditation.

What else do you enjoy beyond gaming?

I started blogging when I retired. We moved onto our boat and were going to cruise down the East Coast, and I wanted to share that experience with my family, co-workers and friends. So I started—and now I can’t stop! Not that I want to stop, but so many people have told me how much they love it and share it with others. Some read it to their dying spouses. My objective is to bring people with me. We’ve been going to a bunch of national parks; we’ve seen so much. When you’re doing something like that, you have to share.

I started in 2001, just writing for myself—300 to 500 words a night on what we saw and did, with lots of details. I wanted to remember it all when I couldn’t do it anymore. I take lots of pictures too, sometimes several thousand in a day. We hooked up the computer to our television, and sometimes we put the screen saver on random, so we’ll be walking through the room and will see a picture from our travels. We’ll sit down and start talking about our adventures, just reliving some days.

What kind of relationships have you formed on the internet?

People who have read my blog have said that after they met me in real life, they thought they had gotten a good picture of me from my writing online. There was a woman in Tennessee who was reading my blog, and she invited us to stop in. So we did, and we really enjoyed each other’s company. She treated me like a rock star! She felt she knew me already from reading my blog.

I feel very attached to some people I’ve met online. One of my e-friends works in the Great Smoky Mountains National Park; she also blogs. Someone criticized her in her comments, and I just felt it wasn’t right—I know this woman so well from her posts. I know what’s important to her; I know what her troubles are. I felt compelled to encourage her, just like you would a friend in real life.

“With a lot of games, like 10x10, you click on little objects and move them. Too often, I actually drop my objects before I have them in the spot I want them, so I mess myself up. It’s physical ability—hands getting stiff with age. I never used to do that! So there’s an element of physical concentration there.”