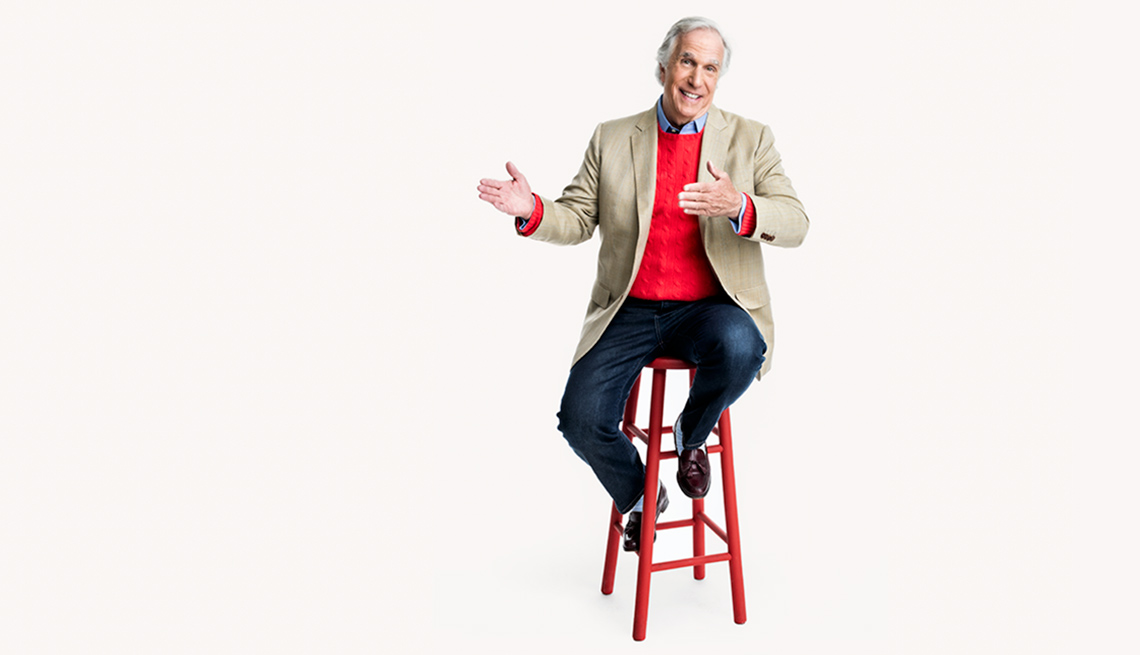 During the course of his career, Henry Winkler has won two Golden Globes and two Daytime Emmy Awards.
Marc Royce
By
AARP
November 08, 2017

Henry Winkler, 72, appears in NBC’s Better Late Than Never and HBO’s upcoming Barry. He's also busy serving as executive producer of CBS’s MacGyver remake but found time to talk with AARP about life — then and now.

William Shatner, George Foreman, Terry Bradshaw, Jeff Dye and I traveled for 40 days on a guy getaway for the new season of Better Late Than Never. We went to Morocco, parasailed in Spain and picnicked in a nude Munich park. Then we visited Berlin, where my parents were from. My Aunt Erna was smuggled out of Nazi Germany in 1939, alive, in a coffin with a spider plant at her feet. When I moved to Los Angeles from New York City in 1974 for Happy Days, I took a cutting with me. That plant is now gigantic and hangs outside our kitchen. It’s truly unbelievable, the tenacity of life.

I was dyslexic and didn’t know it until I was 31. Couldn’t do math, spell or tell left from right — left was the elbow that stuck out the window while I drove. I was told I should write books for children about it. I thought, I can’t — I feel stupid. Then I thought, OK, I’m gonna try. My fourth-grade teacher, Miss Adolf, was very mean, and I portray her that way in Hank Zipzer, the World’s Greatest Underachiever, my series of books about a learning-challenged kid. My music teacher, Mr. Rock, told me, “You’re gonna be OK.” I’ve held on to that buoy for over 50 years.

The true story of the Fonz jumping the shark

My father kept nagging me to tell producer Garry Marshall I was a good waterskier; I taught waterskiing. I told Garry, “My father wants you to know I waterski.” Next thing, the Fonz is jumping the shark while on water skis. [The term “jumping the shark” became a popular term for the moment when a TV show peaks, runs out of ideas, tries lame new ideas that don’t fit the show, and begins to die — other examples are the musical episode of Grey’s Anatomy and the arrival of adorable kid Raven-Symone on The Cosby Show.]  I did the skiing, but they’d never let me do the stunt [a stunt man did the risky shark-jump scene]. On Arrested Development, it was easy to do the shark-jump gag, because the shark was on the dock — I just jumped over it.

Go with your gut

I turned down the lead role in Grease. Didn’t want to be typecast. But  you’re typecast  anyway. And it’s not now that I’m, like, “Oh, I should’ve done the role.” It’s that I turned it down intellectually instead of instinctually. Listen to your gut — it knows everything. Your head knows only some things. So I went home and had an orange juice. Travolta went home and bought a plane.

Underneath everybody’s persona is a dear person. After Richard Gere left The Lords of Flatbush, I joined, and met Sly Stallone. Talks like a tough guy, but he is so dry and funny.

I don’t like motorcycles. After the shot, I always crashed. They gave the Fonz a Triumph — I found out it was the very one Steve McQueen, my idol, jumped the fence on in The Great Escape. I walked by McQueen once in Beverly Hills, and to this day it so irritates me that I didn’t have the wherewithal to stop him and say, “I really love you so much.”

If you know what you want, keep heading toward it and you will get there. Everyone turned down our Hank Zipzer TV show. We sold it to the BBC, and now to Universal Kids, so it has finally made it to America.

The worst thing about aging? Convincing my knees to straighten after a long sit. I have a chat with them. But if you make a life that gives you joy, you have no time to get old.

— As told to Tim Appelo