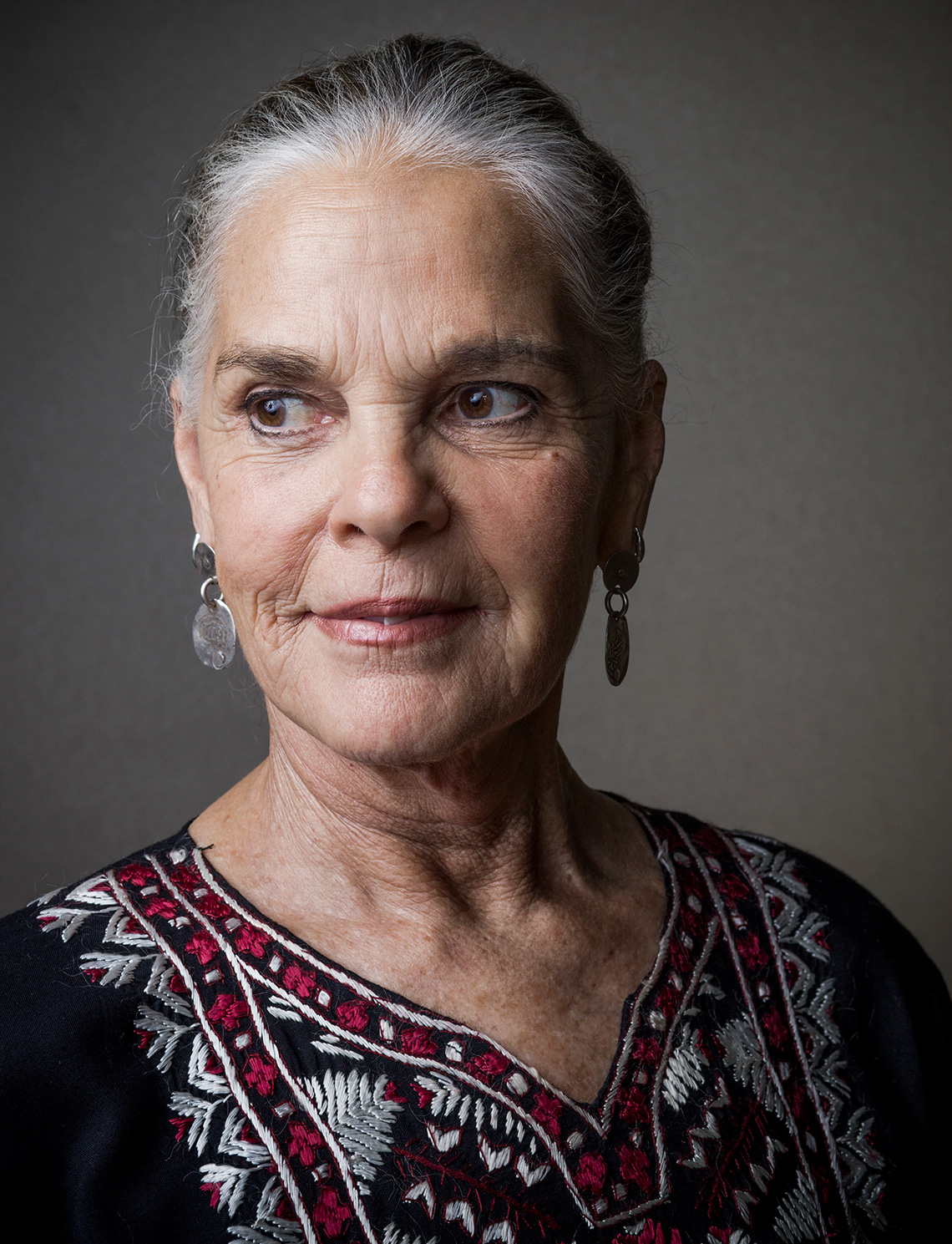 Ali MacGraw pictured in 2015 at a rehearsal for the play "Love Letters."

Whether achieving fame the very moment she landed in a film (1969’s Goodbye, Columbus), defining the style of a decade (her preppy/boho influence still fills Instagram) or breaking the hearts attached to some of the biggest egos in Hollywood, Ali MacGraw always made it look so easy.

When we catch up with her today, at a trunk show for the clothes she has designed for Ibu, a line that employs women artisans in the developing world, MacGraw looks just as breezily chic as you’d expect. At 78, she’s beautiful and entirely recognizable, even without her signature chestnut locks (she let them go gray, finally, a few years ago) and heavy brows (they’re still full, but now a slightly more faded signature). For women who were obsessed with how Westchester County, N.Y-bred MacGraw wore a pair of jeans and a sweater in the 1970s, she lends the same irresistible pull to the flowy caftans and embroidered tunics laid out before her.

At lunch after the Connecticut event, MacGraw is swift to say that her later-in-life Zen — yes, she made a successful yoga video a few years back — comes after a lifetime of lesser-known struggles, and that all the confidence she projected in her early roles was anything but natural.

“I was never trained as an actress. It was frightening for me, every single solitary breathing second. I had some sort of pop-star energy, but I had no qualifications. I was never comfortable,” she explains, as we discuss the meteoric rise that started with Goodbye, Columbus, for which she won a Golden Globe for most promising female newcomer. After that auspicious start came the role of her lifetime, as the beautiful, bright and tragically doomed Jenny Cavalleri of Love Story.

Just as it doesn’t seem possible that MacGraw is 78, it’s hard to believe that she and Ryan O’Neal built that snowman together 47 years ago in the film that fans still want to talk about today. “I am probably more shocked than anyone at the [enduring] response,” she says. “I have traveled to all corners of the world, and it is something of an American classic by now.” After the high-grossing blockbuster, MacGraw went on to make just six more movies and two television miniseries before retiring.

Fresh-faced beauty that she was, MacGraw actually began her acting career rather late, at 31, having worked at fashion magazines and as a photographer’s assistant in New York City after graduating from Wellesley College. But if fear and a kind of impostor syndrome contributed to the shortness of her career, so too, says MacGraw, did her marriage to Steve McQueen, her third husband.

They met on the set of The Getaway in 1972, and MacGraw says that McQueen, who’d survived a difficult and scarring childhood, longed for what he saw as a “normal” life. “At the time he was the biggest movie star in the world and he didn’t want me to work, so I essentially quit making movies and took care of my child,” she says of her five years at home with McQueen and her son, Josh, who was born during her first marriage to Hollywood producer Robert Evans. 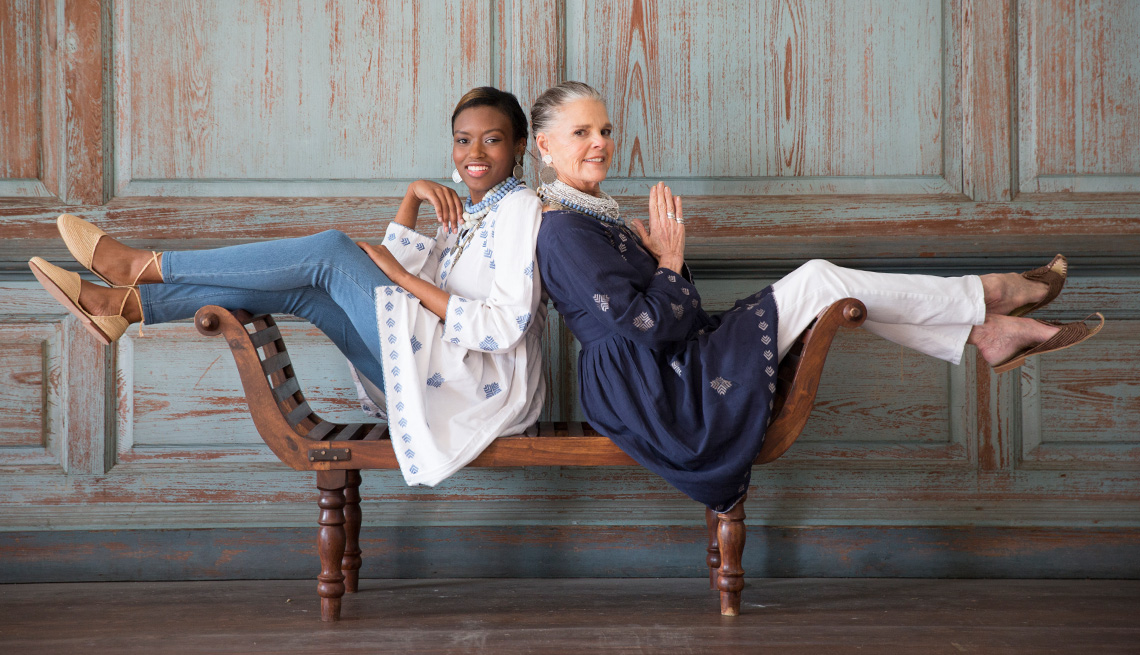 Ali MacGraw in a recent photo shoot for Ibu, a garments and goods company that employees women artisans from around the world.

The couple divorced after five tumultuous years, and McQueen died just a couple years later, in 1980. The next several years, says MacGraw, felt like a constant struggle to feel comfortable in her own skin. As she chronicles in her autobiography Moving Pictures, drinking and a series of destructive love affairs were other personal challenges of the time. Entering the Betty Ford Center in 1986, MacGraw says, turned out to be her salvation.

“My stay there was the most terrifying and life-changing experience I’ve ever had,” she says. “The single biggest thing that happened to me was my newfound certainty that there is a higher power. And I began to feel an underlying peace and sense of order that I had yearned for forever.”

Today MacGraw has no intention of going back to making movies or acting on stage, although she and O’Neal crisscrossed the country performing in A.R. Gurney’s Love Letters last year. “It was heaven to be reunited with Ryan, but I have no desire to make acting a part of my life again.”

What does fill her days, she says, is living “in a community that is small and with many causes that need help.” MacGraw moved to New Mexico to her “little cottage” in Santa Fe about 25 years ago — after she interpreted a fire at her Malibu house in 1993 as a sign that a more physical exodus from Hollywood was necessary — and devotes much of her time to volunteering for animal welfare causes. “I have to restrain myself from bringing home any more strays,” she notes. She also fosters close social ties nearby. “I love it because there are grownup women — women who don’t strut around in the latest fashion and aren’t afraid to let their hair go gray.”

A perfect day in her quiet Southwestern life, she says, begins at 5:30 a.m., when she’s awakened by her animals, and might include a Pilates or yoga class in town, followed by an evening at home. What’s almost always on tap, she says, is a daily walk, which — like much in her life today — she approaches with a sense of purpose. “Walking is my meditation,” she says. “Forty-five minutes of gratitude for all I have been given.” And at this point, she says, if there’s “a piece missing” (the grand love affair ... the person to grow older with ... the artistic breakthrough?), she has made peace with it. “I have wonderful people in my life, and I feel incredibly blessed.”