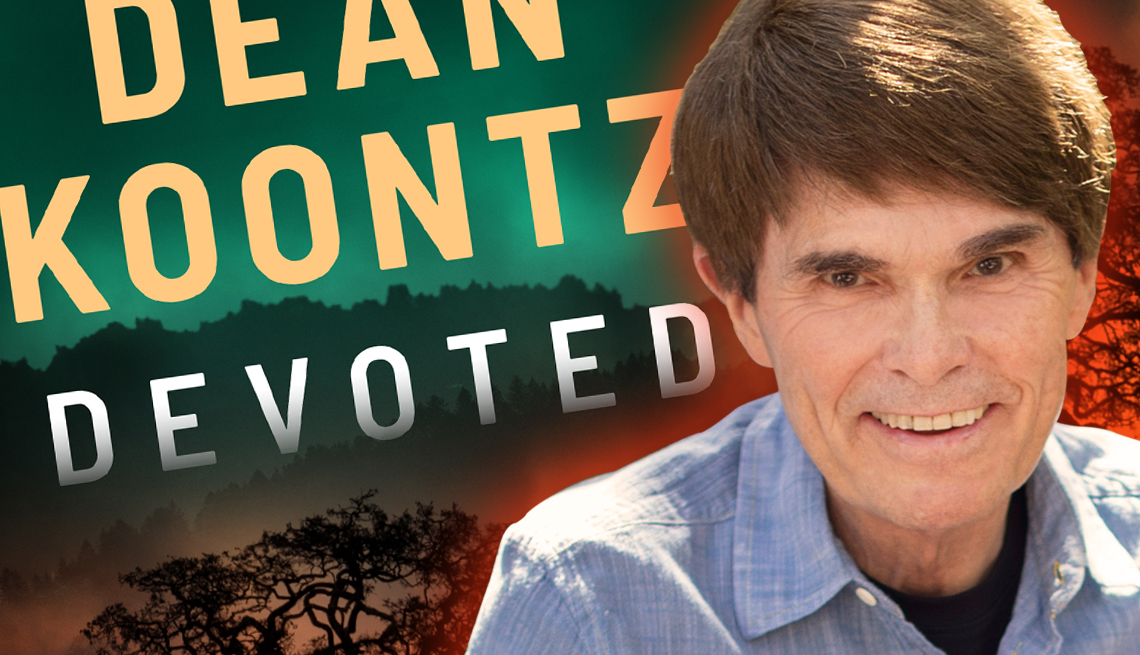 Ever think that Dean Koontz couldn't get any scarier? Well, he can. This best-selling thriller and mystery writer has published more than 100 novels and sold 450 million copies of his books — many with elements of science fiction, horror or the supernatural, Stephen King–style.

The author's knack for suspense reaches new heights with his latest work, Devoted, a nail-biter that matches up a sweet tech wizard named Woody Bookman, 11, who refuses to speak, and his telepathic, super-intelligent dog, Kipp. The two join forces against the evildoers who may have been behind the accident that killed Woody's dad.

"The novel is scary,” Koontz admits in a note on his website to readers, “but not so scary you'll need a bed to hide under.”

Read or listen to the first chapter of this keep-the-lights-on book, below.

Three years after the accident, Megan Bookman's heart and mind were in a good place, although occasionally anxiety afflicted her, a feeling that time was running out, that a sinkhole might at any moment open under her. This wasn't intuition at work, but just the consequence of being widowed at thirty. A love that she'd thought would endure, a man she had believed would grow old with her: All was taken away without warning. This current sense that somewhere bells were tolling toward her final hour would pass; it always did.

She stood in the doorway of her only child's bedroom, watching him at his computer with its array of associated equipment, as he researched whatever currently fascinated him.

Woodrow Bookman, Woody to everyone, had never spoken a word in his eleven years of life. At birth and for a few years thereafter, he cried, but not once since he'd turned four years old. He laughed, although seldom at anything that was said to him or at any comical sight. The cause of his amusement was often internal and a mystery to his mother. He had been diagnosed with a rare form of autism, although in truth the doctors didn't know what to make of him.

Fortunately, he had none of the most problematic behavior associated with autism. He didn't throw tantrums, wasn't stubborn.

As long as he was in the company of those he knew, he never recoiled when touched or suffered mentally from physical contact, though he found strangers suspect and often frightening. He listened intently to everything that was said to him, and he was at least as obedient as Megan had been in childhood.

He didn't go to school, but neither was he home-schooled. Woody was the ultimate autodidact. He taught himself to read only a few months after his fourth birthday, and he was reading at a college level three years later.

Megan loved Woody. How could she not? He had been conceived in love. His heart began beating as he formed within her. As far as she was concerned, it beat in sync with hers all these years later.

Besides, he was as cute as any kid in a cookie commercial and, in his own way, affectionate. Although he allowed himself to be hugged and kissed, he neither hugged nor kissed in return. At the most unexpected moments, however, he reached out and put a hand on hers, or he touched her jet-black hair and then his own, as though to say that he knew he had received it from her.

He seldom made eye contact, but when he did, his eyes sometimes glimmered with unshed tears. Lest she think that he might be sad on these occasions, he always favored her with a smile, almost a grin. When she asked if his tears were happy tears, he nodded, yes. But he could not — or would not — explain what made him happy.

The difficulties of communication meant they couldn't share their lives to the fullest extent that Megan desired, which was a persistent sadness. This kid had broken her heart a thousand times, but with his sweetness, he had also healed it a thousand times.

She never wished that he were normal and not afflicted, for then he would have been a different boy. She loved him in spite of — in part because of — the challenging journey that they were taking together.

Now, watching him from the doorway of his room, she said, “Is everything okay, Woody? Are you all right?"

Although intently focused on his computer, his back to her, he raised his right arm full length, pointing at the ceiling with his index finger, a gesture that she had long ago learned was positive and more or less meant I'm on the moon, Mom.

He made a whirling gesture with the raised index finger, and then his hand dropped back to the keyboard.

Excerpted from Devoted by Dean Koontz with permission from the publisher, Thomas & Mercer. Copyright © 2020 by the Koontz Living Trust. All rights reserved.