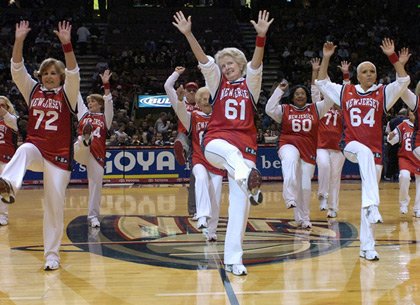 Each fall dozens of diehard dancers defy their age. By busting a move, they make a bold statement: We're not too old for hip-hop.

About a dozen National Basketball Association senior dance squads have formed in recent years, proving that showmanship isn't just for the young. They are eager to get back on the court to perform their sassy routines for throngs of fired-up basketball fans.

"The older people admire us, and the younger people adore us," says Vi Hawkins, 70, a Milwaukee Bucks Seniorgee! dancer. She underwent a hip replacement in 2005, a year before the squad's start, followed by a knee replacement in August 2009 — two months before last season's auditions.

That resilience motivated Peggy Harvey, 64, a co-captain, to recover from a knee replacement in September 2009. "I was back to regular dance practice in eight weeks," says Harvey, a sales assistant at a Milwaukee television station. Even her surgeon was amazed. Co-captain Shirley Browne, 69, is used to rapid rebounds. Teammates return "as soon as they can to keep up with the dancing," says Browne, a diabetic with a pacemaker defibrillator. "We're like a family."

For the love of dance

Squad members experience an adrenaline rush from performing at NBA home games, assisted living facilities, intergenerational events and other venues. Some NBA teams pay them for game-day appearances and dress rehearsals, and give free or discounted tickets. But the dancers say it's more about laboring for love than for money.

"Who would think we'd be doing this when we retire?" wonders Freya Sherman, 65, of The Villages, Fla. She and her husband, Gerry, 67, entertain with the Orlando Magic's Silver Stars. Dancing makes the couple feel young again. "Everything I do now is kind of new to me," she adds. "I never danced before I retired."

The Silver Stars made their debut to a standing ovation during the 2005-06 NBA season. Squad members must live in The Villages, a local retirement community, says Jeanine Klem-Thomas, 37, the Magic's dance team's manager. After training the Silver Stars for the past five seasons, she considers them her adopted grandparents. "Senior dancers are like fine wine," she remarks of the 21 returning members who range from 55 to 70 years old. "They only get better with age."

Fighting for a spot

While the Silver Stars don't require dancers from previous years to re-audition, many squads do. "The Golden Oldies must earn their spot on the team" each season, says Janine Thompson, director and choreographer for the Miami Heat. Being a Golden Oldie offers "the opportunity to do something others only dream of doing—learning hip-hop choreography, dancing to the latest musical hits, and performing in front of thousands of fans."

Competition is stiff. Between 50 and 100 participants typically try out for the Chicago Bulls' Swingin' Seniors. Last year, 14 were selected, says director Cathy Core. She and a choreographer decide who makes the cut. They judge how well the dancers retain step sequences and whether they have likeable personalities. "You can't be too serious and want to do this," Core says. Her Swingin' Seniors strut their stuff at home games that draw up to 23,000 basketball fans.

"The crowd is so responsive," notes Jane Bechtol, 63, who eagerly awaits her fourth season with the Phoenix Suns' Golden Grannies. Mastering a new routine keeps her mind sharp, and dancing provides great exercise. Her teammate LaVerna Rodriguez, 82, finds hip-hop to be even more physically challenging than tap dancing. "Just because you're old doesn't mean you have to sit around and do nothing," Rodriguez says.

Men in the minority

Golden Grannies is a women's squad. Other senior squads welcome men, although they tend to be outnumbered by females. "It's actually quite an honor. I get to be the only guy in a whole harem of beautiful women," says Ronnie Churchill, 58, of Luling, La., a retired chemical plant operator who dances with the New Orleans Hornets' Used to Bees. His wife, Irma Netting, a 54-year-old attorney, has a different role—she's the squad's unofficial photographer.

"When a bunch of seniors come out on the court, you expect them to dance like seniors," explains Used to Bees manager and choreographer Ashley Deaton. So yes, they do the twist, thumping to their generation's beat. When they switch to the music of Lady Gaga and Beyoncé and other top hits, that's when the crowd goes wild. "They're someone's grandparents," says Deaton, 33. "And they're doing the kind of moves kids are doing nowadays in the clubs."

Practices are held once or twice a week, depending on the squad. "Obviously, they have to be physically fit to get through their two-hour rehearsals, but we've had dancers of all shapes and sizes—and ages," says Kimberlee Garris, 31, entertainment manager for the New Jersey Nets.

Joe Bianco, 66, has danced with the NETSational Seniors for "four wonderful years." This will be his fifth. "It's a way to meet people socially and get exercise at the same time," says Bianco, of Ramsey, N.J., who is married and co-owns a commercial real estate firm. He was the lone male dancer in Gotta Dance, a 2008 documentary filmed about the squad when it got off the ground. Since then, a few "fellas" have joined in the fun.

Gotta Dance filmmaker Dori Berinstein, 48, wanted to make a movie that celebrated life and aging. When she saw a newspaper notice for senior dance auditions with the Nets, "I thought this could be it," she recalls. She hopes to develop a Broadway show with the same theme—emphasizing that it's never too late to chase your dreams.

Susan Kreimer is a writer in New York.