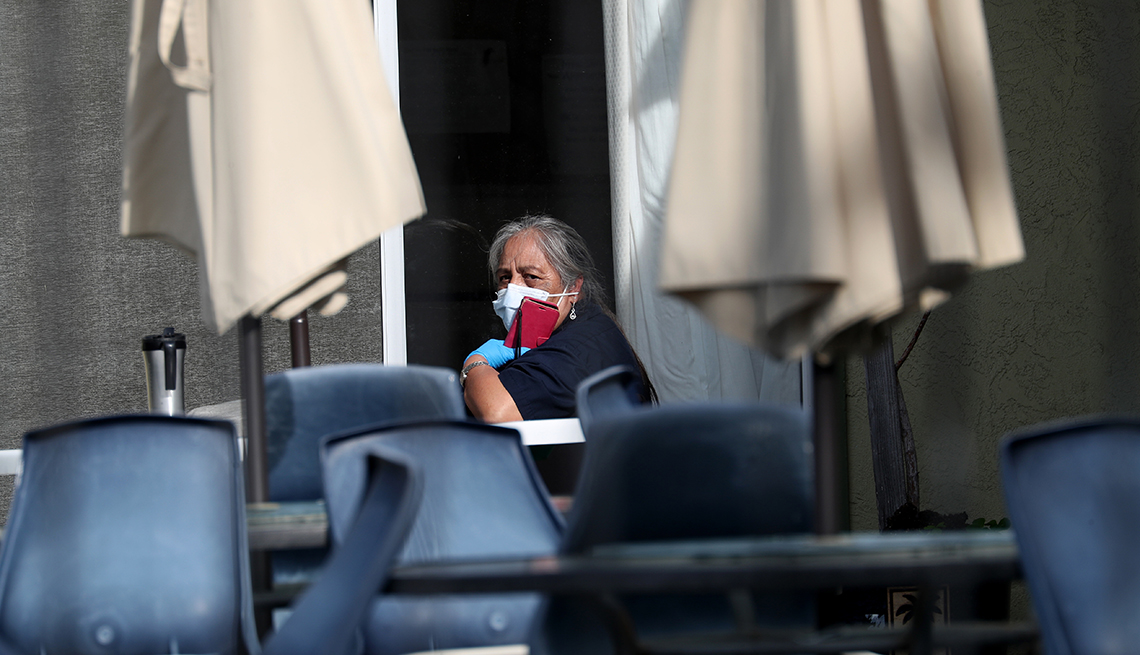 En español | Nursing homes and other long-term care facilities have seen more than 240,000 confirmed coronavirus cases and 50,000 coronavirus-related deaths, more than a third of the nation's total COVID-19 deaths. The cases and carnage are spread among thousands of facilities: around 1 in 4 U.S. nursing homes reported at least one case, and roughly 1 in 5 reported at least one COVID-related death, according to government data released in early June.

So what should you do if a loved one's long-term care facility reports a case? The answer, says AARP Senior Vice President for Government Affairs Bill Sweeney, is “complicated.” The Centers for Disease Control and Prevention (CDC) has issued guidance to the nursing home industry on how to deal with COVID-19 in a facility, but Sweeney says the response has been “very uneven” across the country.

"Some states are doing a great job and some are doing a lousy job,” he says. “It's mind-boggling how the guidance is being interpreted so differently.”

There are differences within states too, says Margaret Barajas, the long-term care ombudsman for Pennsylvania. From county to county and from facility to facility, “inconsistent decisions are being made across the board,” she says, “and that's what's really frustrating families.”

Because of these disparities, experts are encouraging the families and representatives of long-term care residents to seek information on how their specific facility is handling cases and using that as a basis for decision-making. Here are some key considerations.

Is the facility regularly testing residents and staff?

Before a facility can respond to a COVID-19 case, it has to know of it. And that can happen only through testing. “If [facilities] are not testing, saying they have no positive cases doesn't mean very much,” Sweeney says.

The Center for Medicare and Medicaid Services (CMS) issued guidance for weekly testing of nursing home residents and staff, but states have been granted flexibility on deciding how the guidelines are implemented. The result has been “patchwork” testing across the nation, says Elaine Ryan, vice president of state advocacy at AARP.

Most states missed the White House's May deadline for universal baseline testing in nursing homes, Ryan says, citing an Associated Press report. Whether logistics, access, costs or staff issues are to blame, the overall response has been “woefully inadequate,” Ryan says, with many states still weeks away from universal baseline testing. For assisted living facilities — which, unlike nursing homes, are regulated by states rather than the federal government — it's even more unclear where testing rates stand.

Given the variances, it's important to investigate your facility's testing protocols, checking to see whether it aligns with the CDC's testing guidance for nursing homes.

Jennifer Schrack, an associate professor at the Johns Hopkins School of Public Health who specializes in the epidemiology of aging, recommends focusing on staff testing in particular, because “they are one of the key ways that COVID-19 will enter a facility now.” Although the CMS recommends retesting staff on a weekly basis, Schrack says, “if the supplies are available, it's not unreasonable to think that staff should be tested every day; they are the ones who come and go on a daily basis, so even if they test negative one day, they may be positive the next.”

Is the facility being transparent?

While confirmation of a COVID-19 case in a facility can be frightening, receiving this information can actually be a positive sign. “It means there's transparency,” says Sweeney, “which is key; families can't possibly make the right decisions for their loved one if they are dealing with incomplete information.”

Although the CMS has ordered nursing homes to alert its residents and their families or representative of a COVID-19 case within 12 hours of confirmation, some facilities are missing that deadline. And state-regulated assisted living facilities and other long-term care units may not be under the same requirements as nursing homes.

A lack of communication is a warning signal, says Dwayne J. Clark, founder and CEO of Aegis Living, which operates 32 assisted living and memory care units across Washington, California and Nevada. Aegis has experienced 38 positive cases, more than half of which occurred in an early outbreak, in March, at a facility in Washington.

“We have to own both the good and bad news,” he says, noting that Aegis Living facilities aim to communicate new positive cases with residents and their loved ones within 24 hours. “That's the only way to establish trust and comfort among the community.”

If you are struggling to get in touch with a facility, AARP's Ryan suggests reaching out to your state's long-term care ombudsman, who can help you connect with or investigate the facility's protocols.

If there's been a positive case, how has the facility responded?

If a case is confirmed, certain measures must be taken to prevent an outbreak.

The CDC guidance focuses on “cohorting” residents, which involves establishing a designated and separate COVID-19 care unit for residents with the virus. Ideally, the care unit should be as separate as possible from the COVID-free section of the facility. The guidance advises “a separate floor, wing, or cluster of rooms.” Dedicated staff should be assigned to work only on the COVID-19 care unit and should remain separated from other residents and staff.

Johns Hopkins’ Schrack says that a facility should go beyond cohorting to try and separate positive residents from other positive residents where possible. “They should be isolated, even from each other,” she says. “Even though we might think putting positive cases together is good practice, we don't know enough about this virus yet to know if that's okay.”

The federal guidance also offers personal protective equipment (PPE) recommendations for staff, such as wearing eye protection and an N95 or higher-level respirator in the COVID-19 unit at all times, as well as heightened testing and tracing protocols. The recommendations also cover new resident admissions or readmissions to facilities, which can introduce coronavirus.

While the federal guidance is comprehensive, resident advocates warn that, at this stage, it is just guidance — not official requirements. “It's what [the CMS] would like to see, not what they must see,” says Pennsylvania's Barajas. In turn, it's not being adopted consistently. “The CDC guidance and CMS reports may look tidy, but I would caution against any idea that all coronavirus responses are actually occurring this way,” says Ryan. 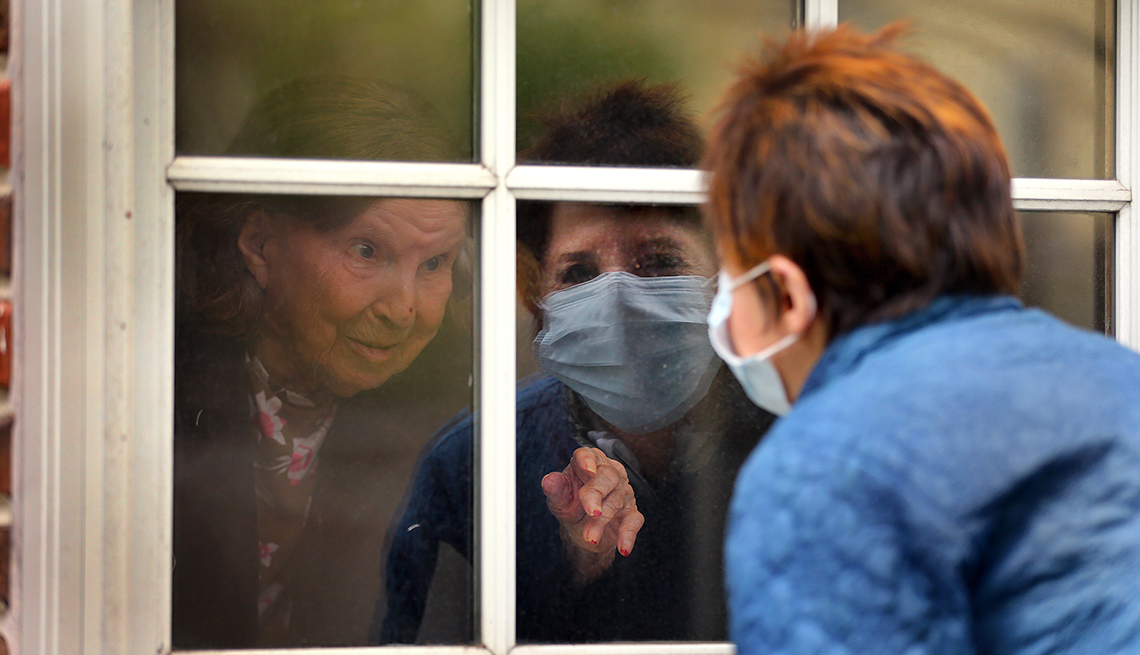 Federal government data show that nursing homes with only one star in the government's five-star rating system are more likely to have large numbers of cases during the pandemic. “Not everyone's equal,” adds Aegis Living's Clark, who says “a provider's history is going to predict their future."

To investigate a facility's track record, visit the government's Nursing Home Compare website, which includes information on infection-control violations for all the Medicare- and Medicaid-certified nursing homes in the country. It also features some survey data taken during the pandemic. The CMS's new COVID-19 website, which allows you to track coronavirus cases and deaths in specific nursing homes, may also be helpful, but it's updated only weekly. You may find more up-to-date information through your state. Clark says that Yelp and Glassdoor reviews are also a good resource.

"Do whatever you can to learn as quickly as possible what the facility has done to respond to a positive result,” says Barajas, who suggests contacting the facility directly, first and foremost.

"Asking them what their plan is and how they're implementing that is a really critical step,” says Lori Smetanka, executive director of the Consumer Voice, a nonprofit that advocates for the public on long-term care issues. This involves many questions, on PPE, testing, cohorting and other areas, she says, which aim to answer the overarching question: What are you doing to protect the residents and staff?

Should I remove my loved one?

It's a tough question and “there's no definitive answers,” Schrack says, “It really depends on whether you can provide better care and a safer environment at home, and if you can, for how long?”

Many factors should enter into the decision, says Smetanka: “Does the resident want to leave? What are their rights for coming back to the facility? Is your home adequately equipped for the care they need? Do they need medical care and how will they receive that? Who is coming into the house, potentially exposing them to the virus?"

"These challenges are not things that can't be overcome,” she continues, “but people really need to be aware that it's often not just as simple as just bringing the person home.”

In short, think it through. And “understand that COVID-19 is going to be a part of our new normal for a while,” Barajas says. “The presence of it in a facility is not a death sentence,” she adds, “but the failure of a facility to act against it quickly and consistently may be."