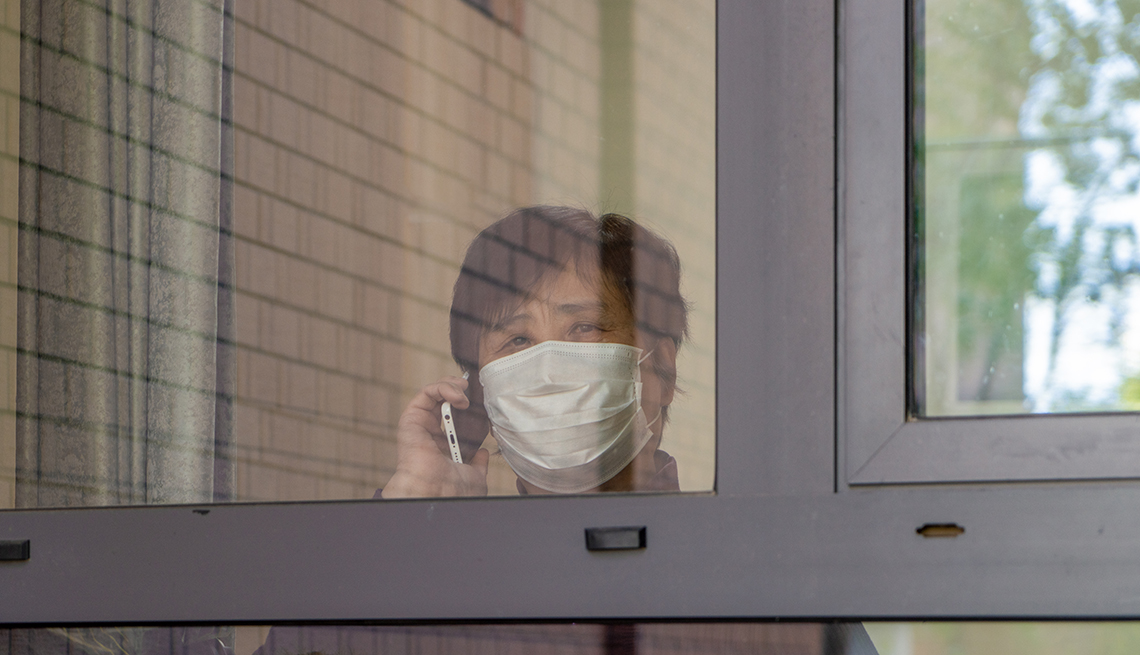 En español | When Florida Gov. Ron DeSantis announced this week that nursing homes in his state could start accepting visitors for the first time since mid-March, 57-year-old Mary Daniel of Jacksonville says she could “finally breathe a sigh of relief."

Daniel made national headlines in July when she took a job cleaning and washing dishes at the memory-care facility where her husband, Steve, who has Alzheimer's disease, lives. It was the only way for her to get in the door to spend time with him, as most long-term care visitors had been barred from facilities statewide because of COVID-19.

Now, a few days later, Daniel is feeling desperate again. Staff at her husband's facility told her it would likely be a month before they'd be ready to begin accepting visitors. She's heard a similar refrain from contacts throughout Florida — that few homes are prepared to welcome guests, even though visitation is technically allowed.

"It's almost cruel, when you have people saying, ‘Can I go in tomorrow? Can I go in the next day?’ — because the order's enforced. The governor signed this,” Daniel says.

The state's plan leaves out some strategies implemented elsewhere, like a regional reopening plan for facilities in certain counties — some of which are seeing the coronavirus continue to spread rapidly. Another notable absence: a requirement for testing visitors.

Some advocates for nursing home residents worry that Florida's guidelines are so broadly written they'll lead to uncertainty, delays and even death. “I'm deeply concerned that this order is going to be used as a blueprint for other states to mirror what Florida has done,” says Lee, a former Florida long-term care ombudsman, who was tasked with helping families navigate concerns about facilities.

'People are desperate for information'

More than 30 states have resumed certain kinds of visits to nursing homes since the federal government released guidelines for doing so in May, urging “extreme caution” and saying the facilities should be “among the last to reopen” in any community.

Most states have moved slowly, with many reunions happening outdoors, at a distance and by appointment only. A handful of states have introduced more visits for family members deemed to be essential caregivers.

In parts of Arizona, where officials announced a proposal for resuming nursing home visits just a few days before Florida, indoor social calls for most guests are allowed only if they can prove they recently tested negative for the coronavirus.

Mandatory-testing states are in the minority, but Lee says that Florida should lead by example. Community transmission of the coronavirus remains high in parts of the state, which regularly reports more than 3,000 new cases a day. “It's not just that we rushed — it's that we somehow purposefully sidestepped the one thing that would give us some measure of confidence that we could do this safely,” says Jeff Johnson, the state director for AARP Florida. “You can't do this safely without testing."

DeSantis put Daniel on the task force that created the guidelines for this week's announcement, which came via executive order. She says testing was not made mandatory in part because of delays associated with the government's preferred coronavirus antigen tests, which can leave people waiting days for results.

Lee and Johnson note that more rapid tests are available. Still, they praise other parts of DeSantis’ plan. Facilities will be able to accept visitors only if they've been coronavirus-free for two weeks. And visits won't be allowed in residences that aren't sufficiently staffed to handle them.

Mike Phillips, Florida's long-term care ombudsman, is hopeful that the state will go a step further in holding facilities accountable for staff shortages, possibly by preventing them from accepting new residents. As of now, facilities that are short-staffed can continue accepting patients while current residents remain cut off from their families. “That's the one area that concerns me a bit — the reentry into the facilities is contingent upon having sufficient staff,” Phillips says.

Florida's policy also gives individual facilities lots of discretion. That means a residence won't be pressured by the government to reopen to visitors if it isn't ready, but Daniel wants facilities to be more proactive in developing and sharing their visitation plans. “I'm chomping at the bit,” she says. “People are desperate for information."

Across the country, visits still rare

Nationwide, long-term care homes have been reluctant to be the first in their state to reopen. Without clearly defined reopening instructions from state officials, facilities don't want to risk exposing residents to the virus.

Lee points to Texas, where nursing home reopening guidelines were issued at the beginning of August. Two weeks after facilities were allowed to submit reopening plans to the state, fewer than 30 of the more than 1,200 facilities in Texas had resumed visits, according to a report from the Dallas Morning News. Only a dozen had been approved.

"It's not going to reunite families the way they want to be reunited,” Lee says of Florida's plan. “And I'm afraid of people getting angrier because this plan fails."

Florida's policies may be revised in the weeks and months ahead. Daniel has worked out an arrangement with her husband's facility as an essential caregiver, allowing her to get Steve ready for bed and tuck him in each night and bypass standard visitor restrictions.

"I'd rather have my husband die with me by his side than die alone,” she says. “I need to think about his quality of life the best I can. And that's what I'm trying to do."

More on Coronavirus and Nursing Homes