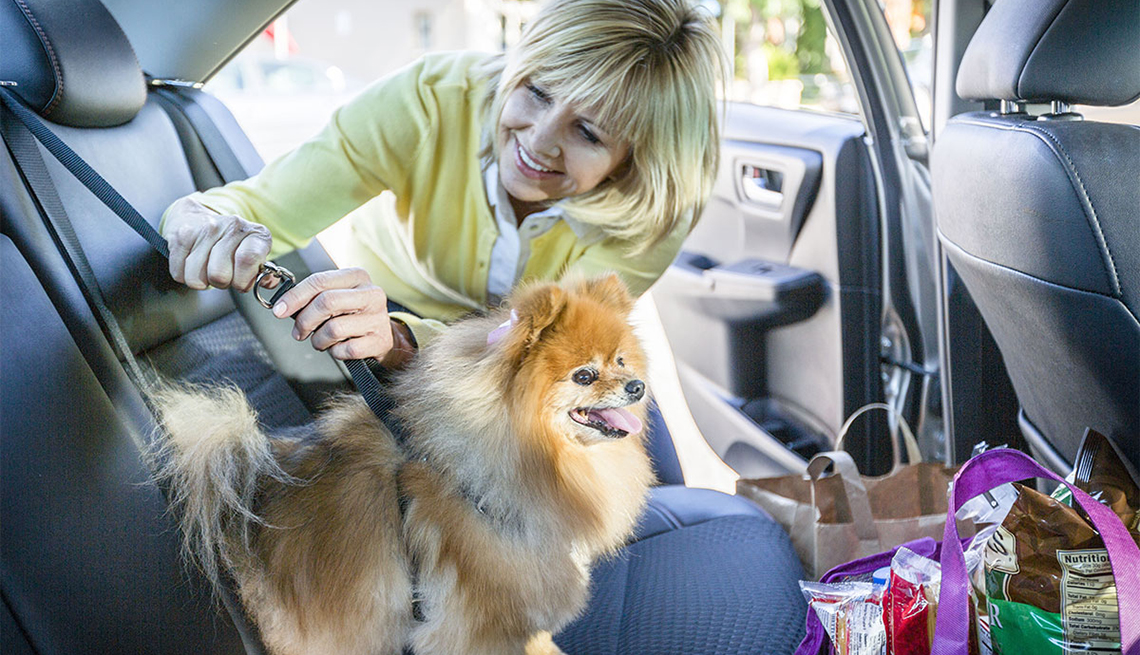 There are plenty of ways to travel safely with your dog

1. Honda Element: A low floor and safety features make this a top pick on message boards.

4. Subaru Forester: Has 68 cubic feet of room with the rear seats down, and a lower floor and plenty of tie-down points to secure a crate.

7. Subaru Outback: A wide low-load floor and an optional pet barrier round out the amenities.

8. Nissan Juke: Easy to get in and out of, especially through the large rear hatch for smaller-to-medium dogs that ride in a crate.

9. GMC Acadia: With ample cargo space, it's a smooth ride for medium-to-large dogs.

If you have multiple dogs:

13. VW Eurovan: Removable middle seats and a sliding side door make this a winner when traveling with multiple Saint Bernards or Great Danes.

Seeing a dog sitting on a driver's lap or sticking its head out a car window is pretty common when you're driving down the street.

But while it looks like the dog is having fun, it is incredibly unsafe for both the owner and the dog.

Research from the pet safety advocacy group Bark Buckle UP found that at a speed of only 35 mph, a 60-pound dog that crashes into the windshield, the front seat or another passenger can have an impact equivalent to a 2,700-pound object.

"There are instances of small dogs and cats jumping into the floor well and getting caught behind the brake, preventing the driver from stopping the car," says Lori Teller, a veterinarian with Meyerland Animal Clinic in Houston. "It is also very unsafe to travel with a pet sitting in the driver's lap. For one thing, this can be a distraction to the driver. But should there be an accident, the dog will probably be crushed between the driver and the airbag or steering wheel."

See what you can save with AARP Auto Buying Program.

Teller says there are plenty of ways to travel safely with your dog, depending on the size of the dog and the type of vehicle. Small dogs and cats should travel in a carrier. When using a crate or carrier, it is important to make sure that the crate cannot fall over or slide around, potentially injuring the dog during sudden stops or turns.

People with larger vehicles, such as SUVs or minivans, have a couple of choices. Most of these vehicles have tie-downs, which can be used to secure the dog's crate. Alternatively, dogs could travel in the back of the vehicle, and a pet barrier can be installed. Pet barriers are available in multiple sizes, and some vehicle manufacturers offer barriers as an add-on feature.

Teller says to pay special attention to safety harnesses. Most harnesses are not strong enough to withstand the force of an accident. "Some harnesses won't prevent a dog from rotating into an abnormal position or keep it from falling off the seat, and the dog ends up twisted in the harness."

If your dog is a large breed and you have a large vehicle, use the cargo area instead of the backseat. Also, keep your dog inside the vehicle. Dogs who ride "head out the window" style at moderate to high speeds can get dirt and debris in their eyes, ears and nose, Teller says.

Phoenix dog owner and pet sitter Marian Lindholtz has two vehicles that require separate restraints. The back cargo area of her 2010 Honda Element is well-suited for a medium-to-large dog. "The Element can accommodate big dogs as well as crates, and it's super easy to configure as needed," Lindholtz says. "It has no carpeting, which makes it super easy to clean."

For smaller dogs like her Chihuahua, Lindholtz uses a doggie car seat in her 2014 Honda Fit.

The foam-padded seat, which you can buy at most pet stores, attaches to a vehicle's seat belt and comes with a containment strap to connect to your pet's harness. The car seat is also elevated so that pets can look out the window.

Having an air-conditioned car is important, as dogs can easily suffer heatstroke. In Arizona, where Lindholtz lives, temperatures can top 100 degrees. "We never drive them anywhere if the AC doesn't work," she says.

When you get to your destination, always leash your dogs before letting them out of the car. Grab a firm hold of the leash when the cargo door opens. Unharnessed dogs could easily run away if overly excited and get lost in an unfamiliar place.