The 50th anniversary of astronaut Neil Armstrong's one small step and mankind's giant leap onto the moon is being celebrated July 20, and it's one more reason Houston is a major tourist destination.

The final frontier is still a big draw and Space Center Houston, roughly 40 minutes from downtown, maintains a strong gravitational pull for visitors. Space Center Houston, the official visitors center for NASA's Johnson Space Center, features an impressive collection of space-related artifacts including multiple spacecraft such as the Apollo 17 command module, used in the last manned mission to the moon; a collection of spacesuits, including Sally Ride's inflight coveralls; and a small, gray triangular piece of moon rock you can touch.

Admission also includes a tram tour to see Johnson Space Center. Tickets are $29.95 with a $2 discount for people 65 and older and a $4 discount for children 4 to 11 years old. Kids younger than 4 can get in free.

Line up early — in July, Space Center Houston opens at 9 a.m. CDT — and pack your patience.

The tram quickly gets crowded and tour operators move as if floating in space. But any initial frustration is worth it: The tram tour ends at Rocket Park, where one of only three of the remaining Saturn V rockets is displayed. 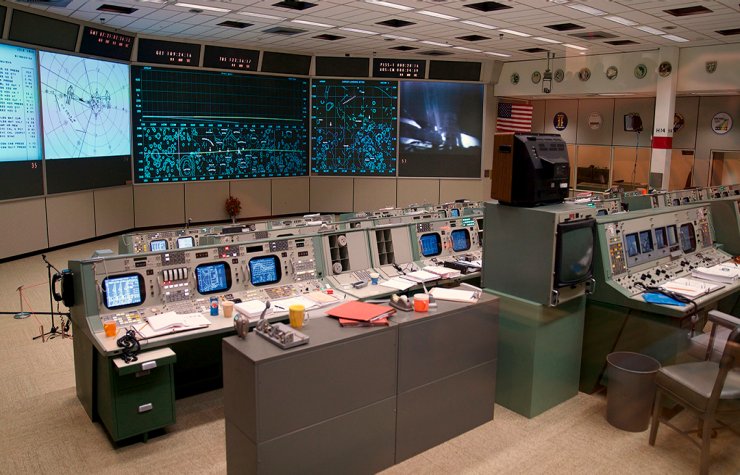 A replica of Apollo 11 Mission Control Room is now on display at the Johnson Space Center.

Johnson Space Center is also home to the Mission Control Room from which Apollo 11 and other missions were monitored. After a $5 million renovation, the restored room, which reopened in late June, allows visitors to see Mission Control exactly as it was 50 years ago, complete with consoles displaying video from the mission, period ashtrays with half-smoked cigarettes and the original 1960s wallpaper.

The restored Mission Control room is the center of Space Center Houston's anniversary festivities, which start July 16 — Apollo 11's launch day — and go through July 24, when the astronauts returned home. Other events include science and technology activities for children, a New Year's Eve-like countdown July 20 to the real time of Neil Armstrong's first steps on the moon and a 1960s-themed Splashdown party with live music and interactive exhibits.

Over the Moon Ways to Celebrate

Houston is pulling out all the stops to observe the 50th anniversary of the moon landing.

Here are few out-of-this-world ways to get in on the action:

All of Space Center Houston's July 20 VIP tickets are sold out, but $49.95 Golden Tickets that include admission to the outdoor festival and concert are still available as of July 15.

While much of the recent buzz surrounding Houston is lunar-landing related, the city's turnaround after 2017's Hurricane Harvey and a booming food and culture scene landed the sprawling Texas metropolis on several must-visit lists lately, including those of the New York Times, Travel + Leisure and Bloomberg.

From Xochi with Oaxacan-inspired dishes to Crawfish & Noodles, which serves Cajun and Vietnamese fare, the food reflects the diversity of the city. Houston is also in the midst of expanding its food hall scene.

Finn Hall opened downtown in late 2018, and three more will follow this year downtown. These sprawling halls show off ethnic and American fare, craft cocktails and local beer all under one roof, which encourages visitors to sample, nosh and nibble through a meal.

The vibrant restaurant scene may fuel visitors as they make their way through top cultural spots.

The Menil Collection, known for its eclectic art ranging from Byzantine antiques to 20th century pop art, underwent a seven-month renovation of its main building and opened the 30,000-square-foot Menil Drawing Institute, its first addition in 20 years. The permanent collection includes works by Matisse and Picasso, and rotating exhibits that change every three to four months showcase artists from around the world.

In the city's downtown Museum District, both the Museum of Fine Arts Houston and the Holocaust Museum Houston underwent significant transformation.

A $450 million expansion, which won't be finished until next year, greatly expands the Museum of Fine Arts. The museum, a 14-acre campus with more than 70,000 pieces, includes art by Georgia O'Keefe, Rembrandt and Goya.

The Holocaust Museum, the nation's fourth largest, will more than double its size after a $50 million expansion. In addition to a larger Bearing Witness Holocaust gallery of artifacts such as a 1942 railcar that transported Jewish people to concentration camps in Germany, a new human rights gallery will explore later genocides and a third will focus on the writings of young diarists, including Anne Frank.