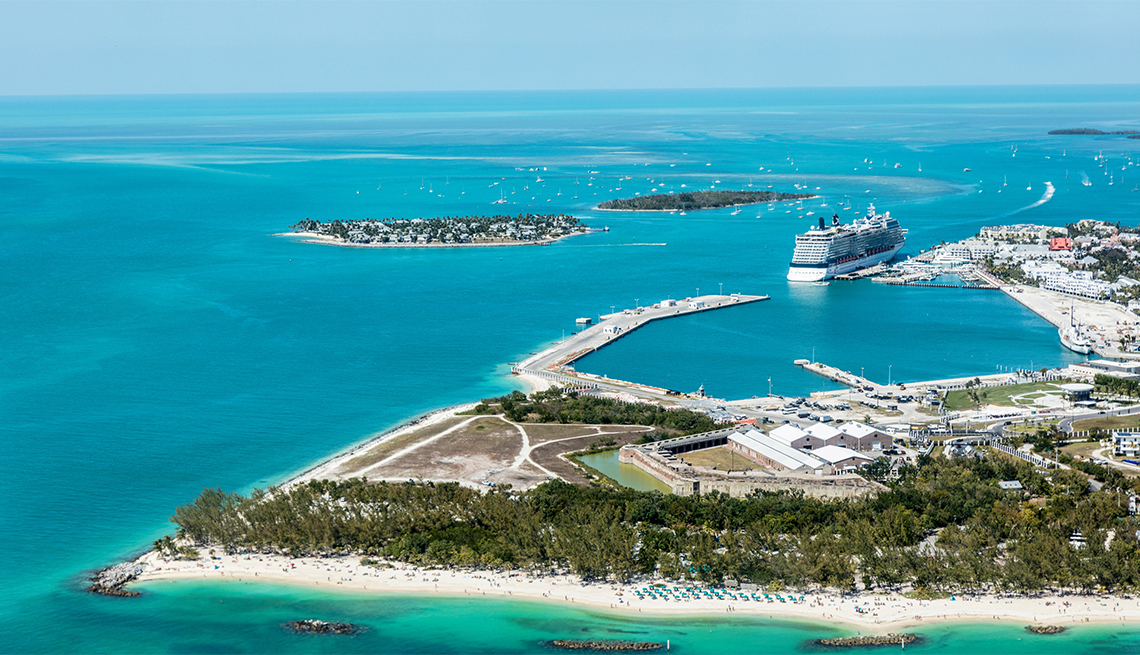 En español | Walking across the steamy tarmac, I look up at the big red letters emblazoned across the front of the tiny airport terminal. “Welcome to the Conch Republic,” they announce, and I have a moment of panic thinking that I forgot my passport. That's when I remember that I'm still in the United States.

Key West, the southernmost point of the continental U.S., feels like a different country — or at least like a very unique place in our own.

In an era of homogenized travel experiences, the island remains refreshingly idiosyncratic, full of independent thinkers like those who inspired Key West's short-lived attempt to secede from the union in 1982. Though its debauchery has been the stuff of legend since rumrunners established Prohibition-era speakeasies (and the island's most famous resident, Ernest Hemingway, wrote in a letter to a friend, “Got tight last night on absinthe. Did knife tricks"), lately it sports a fresh, dapper persona that places culture, environmental stewardship and a hyper-local culinary scene in the spotlight.

The Florida Keys are at the forefront of sustainable travel, highlighting coral reef restoration and sea turtle rehabilitation, and encouraging visitors to tread lightly on the fragile ecosystem of the Florida Keys National Marine Sanctuary, which protects 2,900 square nautical miles of water and reef.

Note that while Key West can get packed with visitors in winter, the peak month for tourism is March, when the drive down U.S. 1 can be a bear — so if you want some breathing room, choose another time of year to visit. You can find lower hotel rates during the rather steamy summer months. Late spring and early fall are often ideal, considering crowd levels and temperature, but keep in mind that hurricane season peaks August through October.

If they don't come by cruise ship (the port receives about 900,000 passengers a year), many visitors arrive by car. Key West is 100 miles from the mainland (and 165 miles from Miami) along the keys down the famed U.S. 1. Parking can be extremely difficult in often-crowded Key West, so you may opt to go by bus; buses leave from convenient locations, including downtown Miami and the major airports in Miami and Fort Lauderdale. You can also catch direct flights from major cities such as New York, Chicago and Atlanta to Key West International Airport. Get to know Key West

For a unique overview of island life, set out with Lloyd Mager of Lloyd's Tropical Bike Tours. The two-hour tour pedals along sun-dappled lanes past pastel Conch cottages and wandering roosters while Lloyd entertains with a brand of lore only a local could share.

As a haven for nonconformists seeking a bohemian lifestyle, Key West has attracted its fair share of creative types, especially writers. Explore the stories, homes and haunts of some of the island's most famous scribes — Tennessee Williams, Elizabeth Bishop and Shel Silverstein have called Key West home — on a walk with the Key West Literary Seminar. Then browse the thoughtfully curated inventory at Books & Books @ the Studios of Key West, operated by beloved author Judy Blume and her husband, George Cooper. A few blocks away you can dive into the life and loves of inarguably Key West's most famous resident, at the Ernest Hemingway Home and Museum.

In the spring of 1832, renowned ornithologist and artist John James Audubon spent several weeks in Key West studying the island's birds, 22 of which he drew for Birds of America. A selection of original prints from that work are on display at the Audubon House & Tropical Gardens, once owned by Captain John Huling Geiger, maritime pilot and shipwrecking magnate. Be sure to spend some time perusing Audubon's 19th-century originals as well as some reasonably priced lithographs and reproductions in the adjacent gallery .

Across the way, dive into the world of shipwrecking and maritime archaeology at the Mel Fisher Maritime Museum. Shallow reefs, turbulent seas and primitive instrumentation led to frequent wrecks around Key West. The most famous of these, the Spanish galleon Nuestra Señora de Atocha, sank in 1622. Centuries later, treasure hunter Mel Fisher and his team scoured the seabed, slowly uncovering bits and pieces of the Atocha's cargo before finally locating the ship's motherlode, valued at $450 million. Head into the big blue 40 minutes north of Key West on Big Pine Key where Bill Keogh of Big Pine Kayak Adventures will meet you off the beaten path at the Old Wooden Bridge Fishing Camp. Pack a picnic and join Bill and his trusty mutt Scupper aboard a flat-bottomed skiff loaded with kayaks for a jaunt through the turquoise waters of Florida Bay and the Atlantic Ocean. Along the way, swim at secluded sandbars and kayak the shallow, mangrove-fringed backcountry in search of lemon sharks, eagle rays and all variety of shorebirds.

About 200 bottlenose dolphins make their home in the waters around the Lower Keys and Key West. The best — and most responsible — way to see them is with Captain Billy Litmer onboard SQUID, Honest Eco's new solar-powered catamaran. Specializing in dolphin-watching tours that include snorkeling protected reefs, Honest Eco recently became a member of the Keys sanctuary's Blue Star program, which supports tour operators committed to both sustainability and teaching their guests to be stewards of the environment. Though the Keys are known more for the beauty of their waters and reefs than their beaches, Fort Zachary Taylor Historic Park is an exception. Tucked away on the far southwestern tip of the island where the Atlantic meets the Gulf, Fort Zach, as the locals call it, is the perfect place to while away an afternoon. Rent a set of beach chairs and just chill, or grab some snorkeling gear for a swim along the rocky breakwater where colorful parrotfish munch away among the corals.

Where to drink and eat

Spend an afternoon immersed in the Old Keys just over Cow Key Channel on Stock Island at Hogfish Bar and Grill. Hogfish is the ultimate seafood shack, complete with thatched roof and harbor views. Boats drop the day's catch right at the dock and if you're lucky their haul will include the restaurant's namesake specialty. Start with a heaping plate of succulent local shrimp known as Key West Pinks before tucking into their famous fried Hogfish sandwich, served on pillowy Cuban bread.

Local chef Paul Menta has worn many hats during his years in Key West, but lately he's focusing his energies on distilling rum, the island's quintessential spirit. Back in town, sample the goods and take a free mojito class at Key West First Legal Rum Distillery — which is, as the name suggests, Key West's first legitimate rum distillery. Menta even rolls his barrels in the ocean to infuse his booze with authentic local flavor. At the dinner hour head to longtime island favorite Blue Heaven in historic Bahama Village, the same structure where Papa Hemingway himself used to referee boxing matches and where a coterie of local chickens struts through a lush patio strung with twinkle lights. Though brunch is the restaurant's mainstay, dinner spotlights fresh local seafood, including a memorable yellowtail snapper bathed in citrus beurre blanc. Don't skip dessert — their key lime pie is legendary.

Ready to join the nightly revelry? You certainly won't be hard pressed to find a spot for a nightcap. For elevated cocktails in a playful atmosphere, check out General Horseplay, which features live music outdoors at the 2¢ Back Bar and Monday night Manhattan specials. Or head to Capt. Tony's. The divey saloon where Hemingway, Truman Capote, Jimmy Buffet and countless others imbibed was once owned by Captain Tony Tarracino, a colorful conch who infamously said during a successful mayoral campaign, “All you need in this life is a tremendous sex drive and a great ego.” If that's not classic Key West, I'm not sure what is.

Nowhere is super-cheap in this popular town, but the following hotels are moderate for Key West, with rates at $110-$150 a night in the low season — not winter, in other words). In January rates go up to around $250/night, which could still be considered a budget rate compared with many other hotels in town.

They include: Travelers Palm Inn, a tiny, six-room eco-friendly spot with tropical gardens irrigated with rainwater and a solar-heated pool; Eden House, a boutique property built in 1924 and tucked into historic Old Town that offers a complimentary evening happy hour and authentic Keys ambience (you can find $99 summertime specials); and the Perry Hotel, a chic beach resort across the channel in Stock Island whose airy rooms have large balconies. It's dog friendly — “dog obsessed,” they say, — with two dog parks on the property. 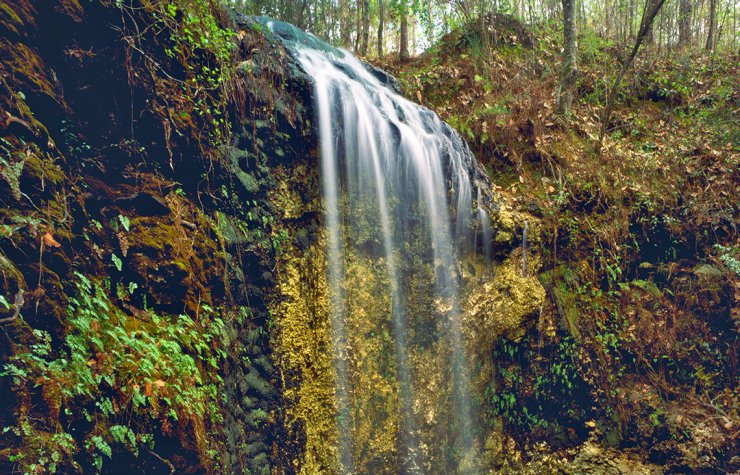 A Road Trip for Nature Lovers 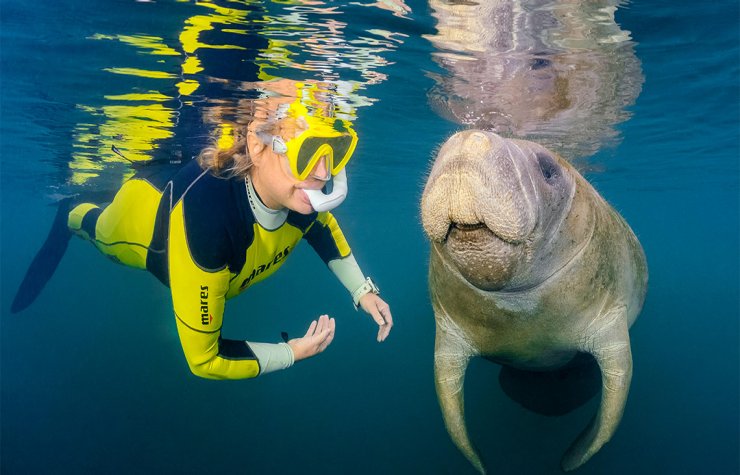