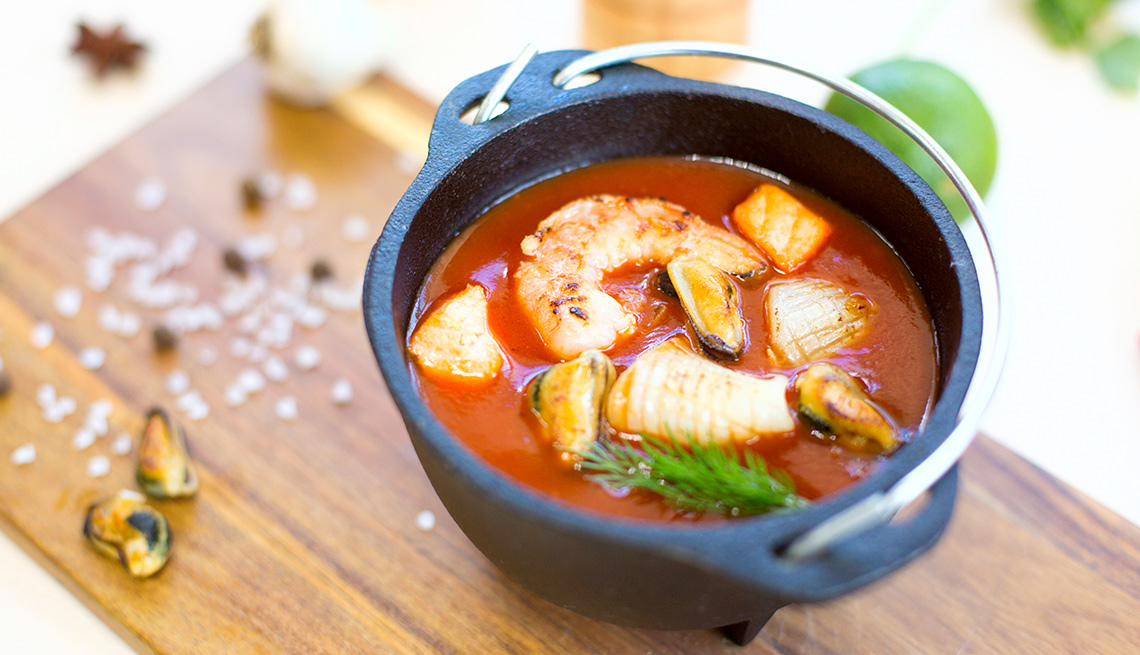 With some 4,400 places to eat, San Francisco has more restaurants per capita than any other major U.S. city; it boasts more three-star Michelin restaurants as well. You can feast on cutting-edge cuisine every night in this foodie haven. But to get a taste of culinary tradition, you should also try the fare that originated here.

Here’s our pick of San Francisco’s top culinary classics — and the best places to sample them.

Why it's special: The bacteria in San Francisco sourdough, Lactobacillus sanfranciscensis, is the key to the crusty-on-the-outside, chewy-on-the-inside, tangy treasure it produces. Isidore Boudin created this San Francisco original in 1849, and the starter he used — now worshipped as the "mother dough" — is still a part of every Boudin bread produced. Sourdough savants swear the bread tastes better in San Francisco than anywhere else. But you can be the judge of that.

Where to try it: Boudin Bakery is where it all started, and the company’s handsome headquarters on Fisherman’s Wharf offers a tour where you can see the bakers at work (and the vault where the mother dough is nurtured), a cafe where you can savor the iconic clam chowder in a sourdough bread bowl, and a bakery where you can buy a baguette for your own picnic on the bay.

Why it's special: San Francisco fishermen from Genoa, Italy, created this seafood stew in the mid- to late 1800s when they plopped their leftover catch of the day into a big pot, making their version of the Genoese ciuppin, or “little soup.” Today it’s a tomato-based seafood celebration with Dungeness crab, shrimp, bay scallops, mussels, clams, calamari and cod, seasoned with basil and garlic.

Where to try it: Sotto Mare, an atmospheric eatery located in San Francisco’s old Italian neighborhood of North Beach, is cioppino central: Here it’s festively presented in a huge metal bowl portioned for two, with ladles, plastic bibs and crusty sourdough bread on the side. It's as close to tasting San Francisco as you can get.

Why it's special: While its origins are disputed, San Franciscans have embraced Crab Louis — also sometimes known as Louie — as their own. A superbly simple mix of iceberg lettuce, tomato and hard-boiled eggs, crowned with meaty chunks of fresh Dungeness crab and served with a special dressing, this salad has been on select San Francisco menus since it was served at Solari’s in 1914. The secret ingredient is the dressing, which varies from chef to chef.

Where to try it: Swan Oyster Depot is the restaurant of choice. Grab a stool at the crowded, convivial counter of this beloved seafood shrine, and dig in. The Swan’s salad is a minimalist mix of lettuce, crab and lemon wedges, dressed with a combination of mayonnaise, ketchup, pickle relish, olives, onions, salt and pepper. The key, of course, is the crab, and Swan — which doubles as a seafood market — features some of the freshest in town.

Why it's special: Like so many San Francisco originals, this dish has a great backstory: In the 1920s or ’30s, at a restaurant called New Joe’s, a customer came in late one night and was told by the chef that all he had left was spinach, onions, mushrooms, ground beef and eggs. The customer asked him to mix them all together — and the scramble that came to be known as "Joe’s Special" was created. Later it was adopted — sans 'shrooms — and popularized by the San Francisco restaurant Original Joe’s, still a beloved institution based in North Beach.

Where to try it: Original Joe’s is the place to go, and you’ll find the ambience — open kitchen, leather booths, white-shirted waiters and patrons swapping jabs and jokes — as comforting as the cuisine. Over the years, the family owners have added a pinch of oregano and basil and a dash of olive oil to the original recipe. Otherwise, you’ll be eating the same scramble that Original Joe’s patrons have been sighing over since 1937.

Why it's special: The burrito wasn’t invented in San Francisco, but the meal-in-every-bite super-burrito that has become standard fare in the city’s Mexican Mission District was created here in 1961, at either Taqueria La Cumbre or El Faro, depending on whom you believe. Much more than meat, rice and beans, the Mission-style burrito bursts with generous portions of those three, plus veggies, sour cream, guacamole salsa and cheese, all wrapped in a steamed tortilla. It’s addicting.

Where to try it: Both of the purported originators have their diehard fans; you’ll get an unforgettable feast — and a taste of the Mission’s lively Mexico-meets-hipster mix — at either one. The other standout worth sampling is La Taqueria, whose rice-less offering was crowned America’s Best Burrito in 2014.

Why it's special: When Judy Rodgers became the chef at Zuni Café in 1987, she began a tradition of introducing innovative, palate-delighting dishes — utilizing local, seasonal, simple ingredients — that continues to this day. Perhaps the late chef's most acclaimed creation is the roast chicken with bread salad. The chicken is roasted for an hour in Zuni’s wood oven on a bed of plump croutons, which absorb the bird’s nectarlike juices as it cooks. This combo is then served with scallions, garlic, mustard greens, dried currants and pine nuts. Like many of Rodgers’ inspired creations, it’s unfussy, brilliant and out-of-this-world delicious.

Where to try it: There’s only one place. Just remember, the chicken roasts for an hour, so you should plan to sip a nice rosé, nibble on some appetizers and, not unlike the croutons, absorb Zuni’s homey, elegant but casual, and romantic ambience while you wait. You’ll be better for it.

Why it's special: Any discussion of San Francisco ice cream should begin by paying homage to It’s-It, the original ice cream sandwich created by George Whitney in 1928 at his Playland at the Beach amusement park. The ice cream company has since relocated to nearby Burlingame, but you can still buy its trademark treat at many local markets. The contemporary successor is Smitten Ice Cream, created in 2009 by Robyn Sue Fisher, an ice cream-loving, science-oriented Stanford MBA who began selling made-that-morning, liquid-nitrogen-frozen creamy concoctions out of a Radio Flyer wagon in Hayes Valley. Each Smitten scoop is made on the spot using fresh local ingredients and Fisher’s signature speed-freezing technology. Enthusiasts claim that this churned-to-order method makes the smoothest, creamiest ice cream anywhere.

Where to try it: Smitten has been so successful that it now has four shops in San Francisco. But for history’s sake, go to the original Hayes Valley location, housed in a recycled shipping container. The menu of ingredients changes daily, but popular scoops include jasmine tea, blood orange cream, passion fruit and roasted dates, and Tcho's 60.5 percent chocolate.

Why it's special: The Buena Vista’s Irish coffee was inspired by San Francisco Chronicle columnist Stanton Delaplane, who was enthusing to then-Buena Vista owner Jack Koeppler about an exceedingly smooth whiskey and coffee drink he’d quaffed at the Shannon, Ireland, airport. Koeppler took on the challenge of re-creating the drink, and eventually — after a pilgrimage to Ireland and a consultation with a prominent San Francisco dairy farmer — found the perfect combination of ingredients and technique: two sugar cubes, Peerless coffee, Tullamore Dew whiskey and lightly whipped heavy cream. The result? Libationary legend.

Where to try it: The Buena Vista, or the BV as it’s known to locals, serves about 2,000 Irish coffees a day. You’re welcome to imbibe the frothy concoction morning, noon or night — but many say it’s a particularly heavenly way to celebrate the end of a delicious San Francisco day.