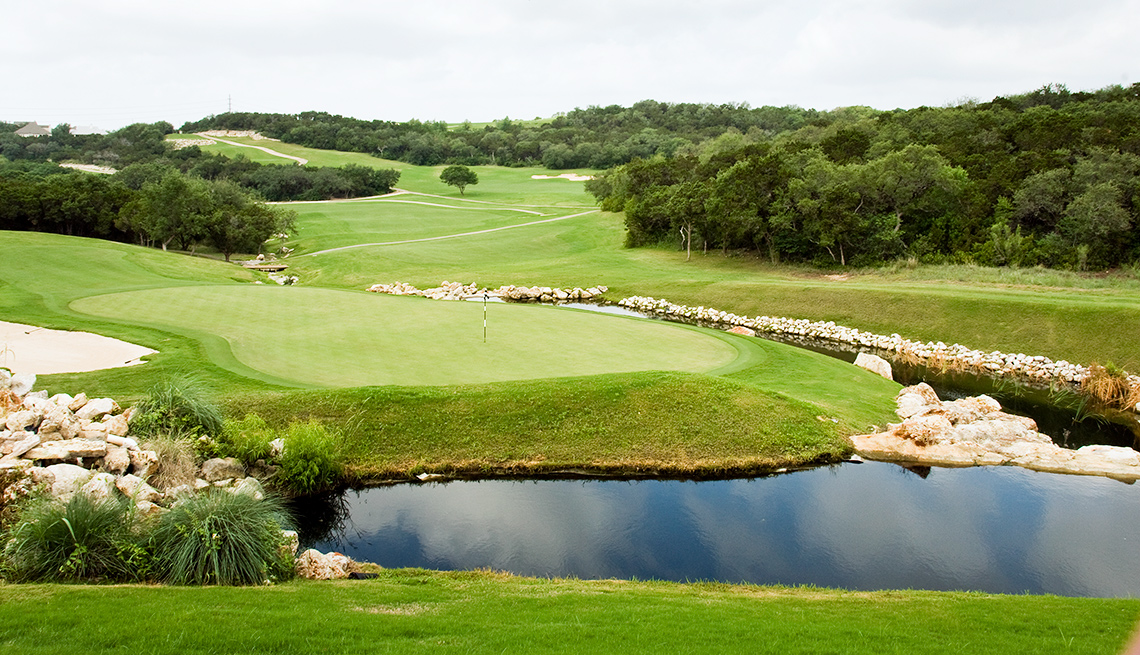 Quantity doesn’t always mean quality, but when it comes to golf, San Antonio has both — in spades.

There are more than 40 courses in and around the city, including one that hosts the Lone Star State’s highest-profile tournament, the PGA Tour’s Valero Texas Open. You’ll find Texas’ oldest public course, and designs by acclaimed architects such as Arnold Palmer, Jack Nicklaus, Pete Dye, Greg Norman, and a rare public — and bargain-priced — offering by the legendary A.W. Tillinghast, whose work includes famed courses such as New Jersey’s Baltusrol, New York’s Winged Foot and the San Francisco Golf Club.

With something for everyone, most experts agree that San Antonio is the state’s top golf destination. “San Antonio has the best collection of golf resorts in Texas, and they are all quite different from one another in style and amenities,” notes Brandon Tucker, senior managing editor for travel for the Golf Channel — who happens to live in nearby Austin.

Here are some top choices.

You simply cannot beat the quality of golf for the dollar at Cedar Creek Golf Club. It’s one of the eight city-owned courses comprising the budget municipal Alamo City Golf Trail, but while the rest are on smaller lots closer to downtown, this is on the less-developed northwest side of the city. Cedar Creek is representative of nearby Texas Hill Country, on rolling terrain with frequent elevation changes and a wide variety of tees that allow golfers to play it from a short 5,500 to a brutish 7,100 yards. Yet greens fees never go above $31, and for those 65 and over, start at just 20 bucks. Its siblings are great buys as well, as Tucker notes: “The eight municipal courses bundled up into the Alamo Golf Trail offer wonderful affordability and variety, too.”

The 36-hole Westin La Cantera Resort is a destination golf resort known for offering a high-quality experience on both its courses, which are managed by upscale specialist Troon Golf. The Palmer Course is very hilly with dramatic elevation changes, forced carries and several blind shots, and it appeals to better players. It is also beautiful and features waterfalls on two holes. Those looking for a more relaxing round with the same premium experience should consider the Resort Course, which is also eye-catching and gorgeous, dotted with exposed limestone outcroppings and water features.

Both courses feature five sets of tees for varied options. Uniquely, the resort sits immediately next to the Six Flags amusement park, and golfers view — and hear — the roller coasters at several points during their rounds. The resort uses dynamic tee time pricing based on demand, but both courses cost the same. Peak weekend morning rates typically max out at $150, while weekday afternoon rates can be much less.

“Seniors will enjoy Brackenridge Park Golf Course, a historic and restored A.W. Tillinghast design near the heart of town,” suggests the Golf Channel’s Tucker. Tillinghast, a member of the World Golf Hall of Fame, is widely considered one of the greatest designers in the history of golf. He planned many exclusive private clubs — his courses have hosted 50 majors. Brackenridge, the jewel in the municipal Alamo City Golf Trail, is one of his most accessible works and costs just $42 to $60.

A 2008 historic renovation returned it to its original design, and its clubhouse now houses the new Texas Golf Hall of Fame. While steeped in history, the course is far from penal and is an open parkland design with little in the way of forced carries. It is short, just 6,243 yards from the tips and a very manageable 5,807 from the white tees. “Brackenridge Park is one of the real jewels of Texas golf,” says Texas golf writer Mike Hiller.

The must-play San Antonio layout for better golfers is the AT&T Oaks Course at the TPC San Antonio. Owned and operated by the PGA Tour, this is a high-end daily fee course designed by Greg Norman, and the site of the PGA Tour’s annual Valero Texas Open. Low handicappers can play in the footsteps of the world’s best and really face a stiff challenge. As if the prodigious length — a whopping 7,435 yards from the back tees — was not enough, the greens are heavily protected by bunkers. The TPC also has another first-class course, the Pete Dye-designed AT&T Canyons Course, which hosted a Champions Tour event. While it is a few hundred yards shorter, it has frequent elevation changes and much different topography than the flattish Oaks layout.

Many avid golfers make it a point to play both in a visit, but they are among the more expensive area options, with peak rates reaching nearly $300. The complex is part of the JW Marriott San Antonio Hill Country Resort & Spa, but Hiller warns, “Don’t let the word ‘resort’ fool you; these two tracks were designed for serious golf.”

If you are shaking a little rust off your swing, head to the Republic Golf Club, whose more traditional layout with its wide fairways is user-friendly. It has an escapist natural feel just 10 minutes from downtown, making it one of the city’s most popular public courses. The Republic features five distinct sets of tees in roughly 500-yard increments from 4,683 to 7,007 yards, allowing guests to play it at a length that suits their game. They can get warmed up at an extensive practice facility and driving range. Golfers 65-plus can play any time during the week for just $36 with cart, making it a great deal as well.