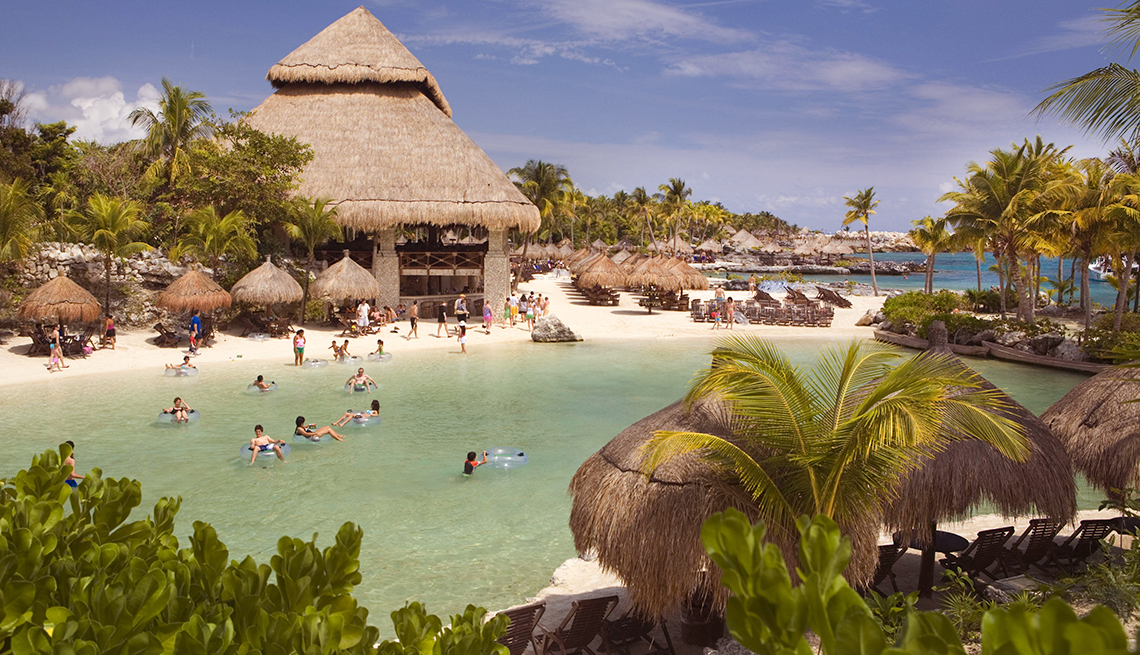 Cancún owes its existence to the dazzling beaches that line the Caribbean shore, but those strands are mere baubles in the trove nature has bestowed on the Yucatán Peninsula. Despite rampant tourism development in recent decades, much of the land has changed little since the Maya took custody around 1500 BC.

That means beachgoers are always just minutes away from an array of natural wonders: cenotes (natural sinkholes), caverns, underground rivers, the Western Hemisphere’s largest barrier reef, low jungle and mangrove forests. An unusually high percentage of the region’s immense variety of wildlife is found nowhere else. These are the places where you move beyond the sun-drenched sands, even beyond admiring the ancient Maya ruins, and begin to understand how this land gave rise to one of the world’s most advanced civilizations.

Here are the best eco-attractions for a back-to-nature experience.

No natural feature is more intriguing than the cenote, created by breaches in the subterranean basin’s ceiling that reveal crystalline waters hundreds of feet deep. An estimated 6,000-plus cenotes tattoo the Yucatán, some accessible only through a fissure in the porous limestone, others partly or completely open, resembling a pond.

Immersed in the fresh, cool water, with sunlight filtering through holes in the ceiling to spotlight otherworldly rock formations and ropey tree roots seeking water from above, you can see why the Maya considered cenotes sacred portals to the underworld. Popular eco-parks up and down the Riviera Maya south of Cancún enclose cenotes, and local outfitters offer a wide variety of tours. But to feel the magic that inspired the Maya to hold religious ceremonies in them, you can visit smaller sites on your own.

Some cenotes are accessible by public transportation, but they are best explored by car and require some walking to reach them. Bring hats, biodegradable sunscreen, water, snacks and cash for entry fees, which may range from about $2 to $7, depending on facilities (most have restrooms, at the least).

Dozens of cenotes and caves are open to the public along coastal Highway 307. At Cenote Azul, where you can swim with catfish in several large pools, a wooden lounging deck juts over the water and walkways offer easy access. Gran Cenote’s crystal-clear waters lead to seemingly endless caverns where snorkelers can glimpse striking rock formations. Jardín del Edén resembles a huge swimming pool with abundant rocky outcroppings for lounging in the sun after a swim among tropical fish and eels.

There are plenty more, and new ones seem to pop up every day; just follow the rustic wooden signs along the highway. The Ruta de Cenotes (cenote route) out of Puerto Morelos is also riddled with well-marked cenotes. The road is lightly traveled, and most sites welcome walk-ins, except for Selvatica, which has been turned into an elaborate adventure park.

The reserve’s more than 1.3 million protected acres — about the size of Everglades National Park — support more than 100 mammal species, including such rarities as jaguars, tapirs and manatees. Roughly 350 bird species and 4,000 plant species also flourish here. At least 23 archaeological sites have been recorded.

In keeping with the biosphere mission, much of Sian Ka’an is off limits to visitors. For a modest fee, you can drive through an entrance arch at the end of Tulum’s hotel zone and spread a towel at any number of beaches, but you’ll need a certified tour to sample the reserve’s remarkable diversity. Visit Sian Ka’antours depart from the Tulum entrance, while Community Tours Sian Ka’anoperates out of Muyil to the south and includes a tour of the local archaeological site. Both offer a variety of tours that can include jungle treks, floating through canals carved by the Maya, boating through lagoons and wildlife watching. (Visitors with mobility issues can opt to stay on the floats.) Hotel pickups are available at extra cost.

Xcaret and its offshoots

Xcaret, granddaddy of the proliferating eco-adventure parks on this part of the coast, is to the Riviera Maya what Disney World is to Orlando (with prices to match). Tributes to the Yucatán’s nature, history, gastronomy and art amount to a crash course in local nature and culture. From diving and snorkeling to swimming with dolphins, rays or sharks, to horseback riding and floating through underground rivers, activities cater to action junkies but also include a bat cave, an orchid nursery, a folk art museum and other exhibits. You can also ogle jaguars, manatees, sea turtles, monkeys, macaws and flamingos, all in one day. Wheelchairs are available at the visitors center; guides can help people with disabilities plan their day.

After opening in 1990, Xcaret begat four more parks. Xel-Há was built around the meeting of freshwater underground rivers with the Caribbean Sea. Visitors can snorkel in rivers, grottos, caves and inlets teeming with marine life, and follow paths through the mangroves and into the jungle. Xel-Há also offers the now-obligatory zip line and a bevy of restaurants.

Next came Xplor, which focuses on zip lines, jungle exploration by amphibious vehicle, spelunking, and rafting or swimming in underground rivers. Xensesand Xoximilco are more about entertainment than nature, but Xenotes— a tour rather than a park — visits four Ruta de Cenotes sites, each displaying a different type of cenote.

For all Xcaret parks, booking online at least seven days in advance will garner discounts of 7 to 10 percent; hotel transportation is available for an additional fee.

Other eco-parks and tours

Smaller, less commercial parks offer a more intimate experience, and some of the best are operated by local communities. Aktun-Chen is one of the Yucatán’s finest caverns, with underground pools and large chambers, and includes a small zoo with native animals. Río Secreto’s standout cavern tours delve deep into the Maya’s concept of the underworld while visitors walk and swim through otherworldly rock formations. At LabnaHa, which is oriented to active adventurers and helps support local Maya communities, small guided groups may dive, snorkel, kayak and soar on zip lines at three linked cenotes and underground caves. Advance reservations are required here, and recommended for most parks.

Spider monkeys and a contingent of howlers are the main attraction at Punta Laguna, a nature reserve near the ruins of Cobá created by local farmers, but it’s also a paradise for birdwatchers. The required private tour with a knowledgeable local guide includes a jungle walk (not steep, but wear sturdy shoes), canoeing, swimming and rappelling into an underground cenote. Numerous tours combine Punta Laguna with Cobá or other attractions.

More monkeys are in residence at the Akumal Monkey Sanctuary, which also houses other rescued animals, and the Jungle Place, a sanctuary in Chemuyil. Both require advance reservations, the earlier the better. They do not provide transportation.

Monkeys appear at two beloved roadside attractions. Croco Cun is a onetime crocodile farm turned interactive zoo. It runs a breeding program for the toothy reptiles but also houses all manner of native fauna. It is easily walkable and wheelchair accessible. The Ya’ax Che Jardín Botánico, occupying 161 acres of jungle, is a botanical garden of native plants that also harbors a small archaeological site, a reconstructed Maya home and a chiclero camp where workers extracted chicle for chewing gum. These are both walk-in places.

Alltournative, Ecocolors and Maya Ka’anoffer tours to many of these eco-sites, and all are committed to ecology and Maya culture.