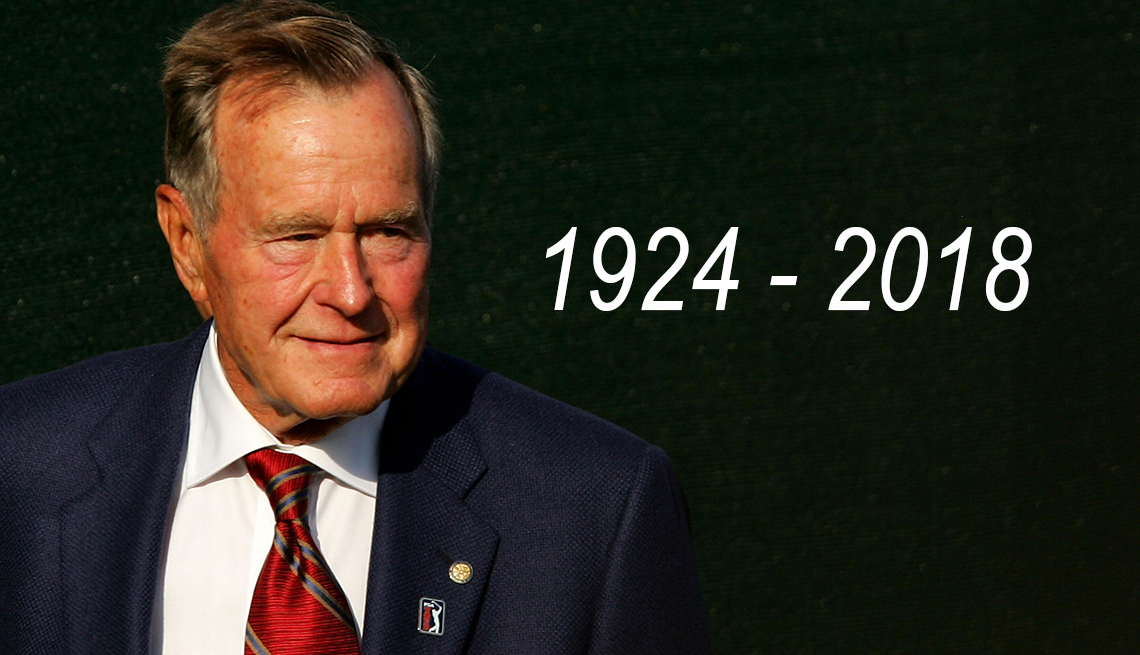 Editor's note: This article has been updated to include funeral information.

En español | He was born into privilege in Milton, Mass., but George Herbert Walker Bush became a practical man and dignified politician who helped maneuver America through global conflict and the end of the Cold War. After a life illuminated by four decades of public service and a “points of light’’ personal philosophy, the 41st president died Friday as he had lived, quietly and with dignity surrounded by family and close friends at his home in Houston. He was 94.

No cause of death was released but it was no secret that the elder statesman’s health had been deteriorating, and he reportedly told family members this year that he did not want to return to the hospital. Among other ailments, the former president suffered from a form of Parkinson’s disease. 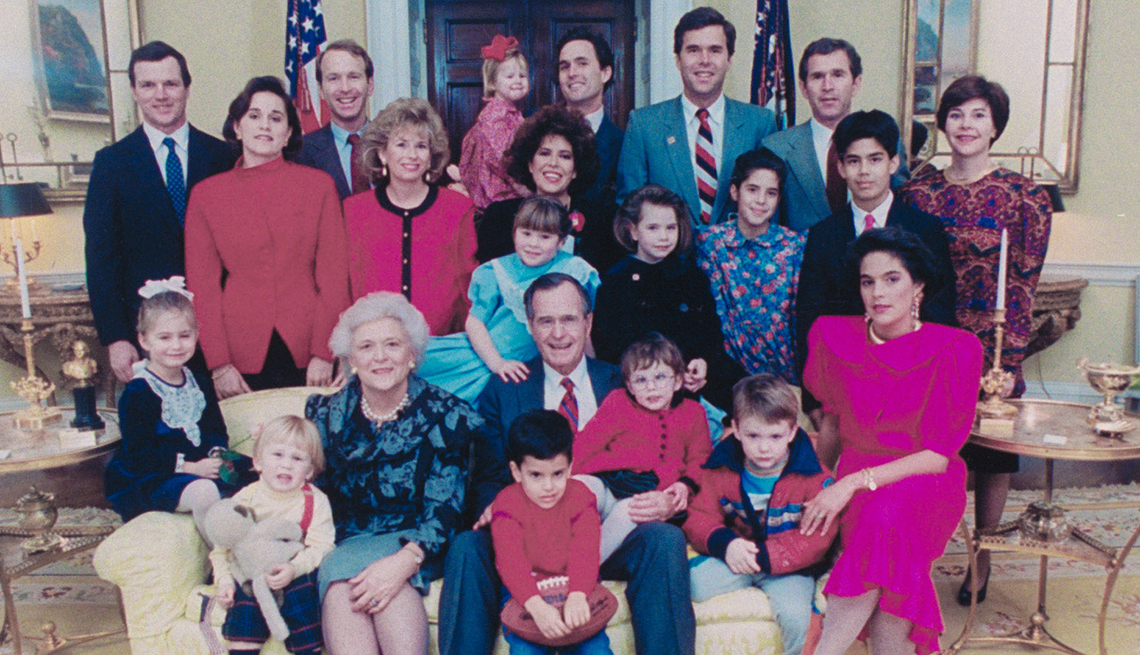 The Bush family (in-laws, children and grandchildren) in the White House on Inauguration day 1989.

Patriarch of a powerful Texas political family — eldest son George W. Bush was the 43rd president — the Yale University graduate was married to Barbara Bush for 73 years until her death at 92 last April. On Saturday, former Florida Gov. Jeb Bush called his father “the greatest human being that I ever will know.’’ His brother, former President Bush said their dad, “was a man of the highest character and the best dad a son or daughter could ask for.”

Wednesday, the first presidential funeral since Gerald Ford died in 2006 will be held at Washington National Cathedral. President Trump and first lady Melania Trump will be among the many distinguished mourners expected to attend the invitation-only service.

Bush will lie in state in the rotunda of the U.S. Capitol until Wednesday morning. He also will lie in repose late Wednesday and early Thursday at St. Martin’s Episcopal Church in Houston, where a second memorial service will be held Thursday morning. He will be interred later Thursday at the George Bush Presidential Library and Museum at Texas A&M University in College Station, Texas.

Trump has declared Wednesday a National Day of Mourning and tweeted, in part, that Bush “led a long, successful and beautiful life. Whenever I was with him I saw his absolute joy for life and true pride in his family. His accomplishments were great from beginning to end.’’

“Today we grieve the loss of a lifelong public servant,” Jenkins said. “We remember President Bush for signing into law two bills that greatly improved older Americans’ lives: the Americans with Disabilities Act, passed in 1990, and the Older Workers Benefit Protection Act, which he signed the same year to strengthen the Age Discrimination in Employment Act of 1967.”

Jenkins said, “President Bush fought ageism in another way, too: as he turned 75, 80, 85 and then 90, he marked milestone birthdays by skydiving. His first parachute jump wasn’t by choice, as it resulted from his fighter plane being shot down in World War II, but his later-in-life jumps showed his passion for life. “ 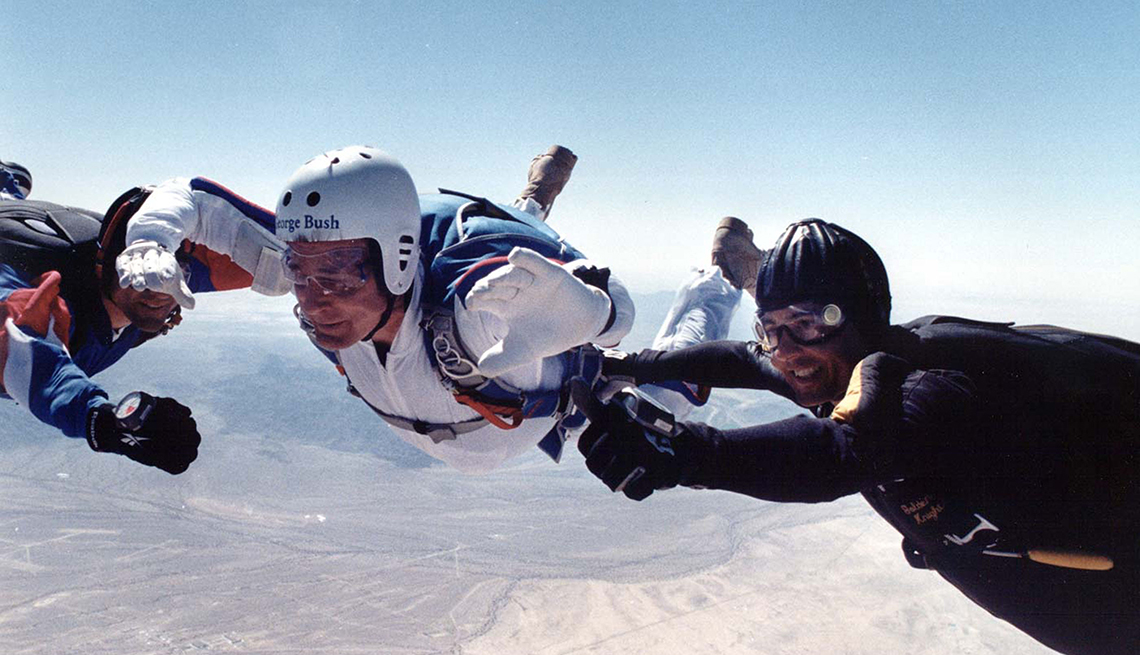 Just four years ago, at 90, Bush took the last of those four birthday skydiving jumps. He was taken from a wheelchair to a helicopter before his 6,000-foot leap.

“I think it sends a message around the country that, just because you’re 80, doesn’t mean you can’t do fun stuff or interesting things,’’ he told broadcaster Larry King. “You can. And I am.’’

During his one-term presidency from 1989-1993, Bush served in the White House during the fall of the Berlin Wall in 1989, the collapse of the Soviet Union in 1991 and the breakup of Eastern Europe’s communist bloc. Retired Gen. Colin Powell, chairman of the Joint Chiefs of Staff under Bush, remembered his boss as a “superb commander in chief.’’

“He was very, very deliberate in his thinking, knowing that we were sending young men and women to war, and (that) some lives would be lost,’’ Powell told CNN on Saturday. President George H.W. Bush sits at his desk in the Oval Office as he delivers an address to the nation on the suspension of allied offensive combat operations in the Persian Gulf in 1991.

National tributes paying respect to Bush’s humble service, forbearance and demeanor were immediate. Known as a collector of friends, he was remembered for reaching across the aisle to political opponents as he preached a “kinder, gentler nation.’’

“Hillary and I mourn the passing of President George H.W. Bush, and give thanks for his great long life of service, love, and friendship,’’ said former President Bill Clinton, who won his own first term by defeating Bush. “I will be forever grateful for the friendship we formed. From the moment I met him as a young governor invited to his home in Kennebunkport, I was struck by the kindness he showed to Chelsea, by his innate and genuine decency, and by his devotion to Barbara, his children, and their growing brood.’’

Former President Barack Obama tweeted, “While our hearts are heavy today, they are also filled with gratitude,’’ as he called Bush’s life a “testament to the notion that public service is a noble, joyous calling.’’

While Bush was not viewed as a great orator, he had at least a couple of memorable moments before a microphone. Both came on the same August day in 1988 at the Republican National Convention.

“This is America ... a brilliant diversity spread like stars, like a thousand points of light in a broad and peaceful sky,’’ Bush said in his nomination acceptance speech. In a letter years later, he expounded on his “points of light’’ quote.

“I have pursued life itself over many years now and with varying degrees of happiness,’’ he wrote to granddaughter Jenna Bush in 1997. “Some of my happiness still comes from trying to be in my own small way a true ‘point of light.’ I believe I was right when I said, as President, there can be no definition of a successful life that does not include service to others.’’

Perhaps Bush’s most-famous quote was his pledge: “Read my lips — no ... new ... taxes.’’ But two years after defeating Michael Dukakis to become president, Bush felt pressured to make a budget-deficit reduction deal with the Democratic-controlled Congress and agreed to a tax increase, infuriating many Republicans and undermining a potential second presidential term.

But for all his triumphs and missteps, Bush never was preoccupied with how he would be remembered. As he once said, “I view my legacy as let the historians figure out what I screwed up and figure out what I got right.’’