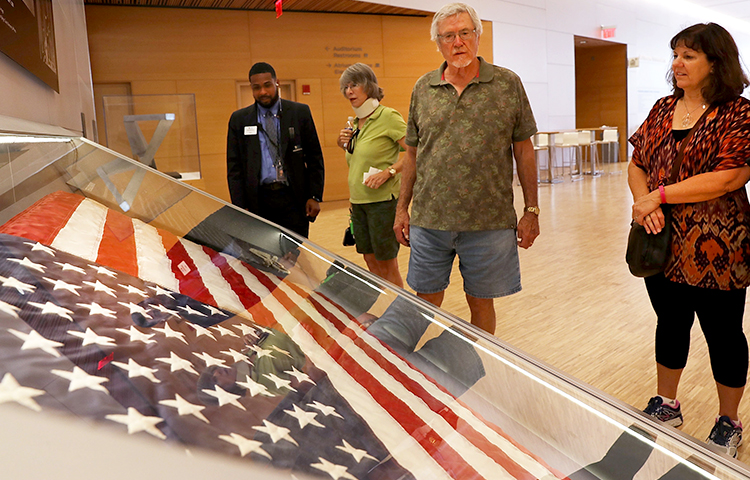 The American flag raised by firefighters above the World Trade Center in New York on 2001 is displayed for the first time at the National September 11 Memorial & Museum.

An American flag raised at ground zero on Sept. 11, 2001, in a defining moment of patriotic resolve took its place at the site Thursday after disappearing for over a decade.

The 3-foot-by-5-foot flag took a curious journey from a yacht moored in lower Manhattan to the smoking wreckage of the World Trade Center, then to a firehouse about 2,400 miles away in Everett, Wash. — and now to a glass case at the National Sept. 11 Museum.

A TV show, a mysterious man and two years of detective work helped establish its whereabouts.

The flag is the centerpiece of one of the most resonant images of American fortitude on 9/11. After plucking the flag from a nearby boat, three firefighters hoisted it amid the ashen destruction as photographer Thomas E. Franklin captured the scene. The picture inspired a postage stamp, sculpture and other tributes.

The flag had flown at Yankee Stadium, outside City Hall and on an aircraft carrier near Afghanistan — except it wasn’t the right flag. It was bigger, and by 2004, the yacht’s owners had publicly broached the error. By then, officials had no idea what had happened to the real flag.

Then in November 2014, a man turned up at an Everett fire station with what is now the museum’s flag, saying he’d seen a recent History channel piece about the mystery. A forensics expert analyzed dust on the flag and halyard and found it consistent with ground zero debris.