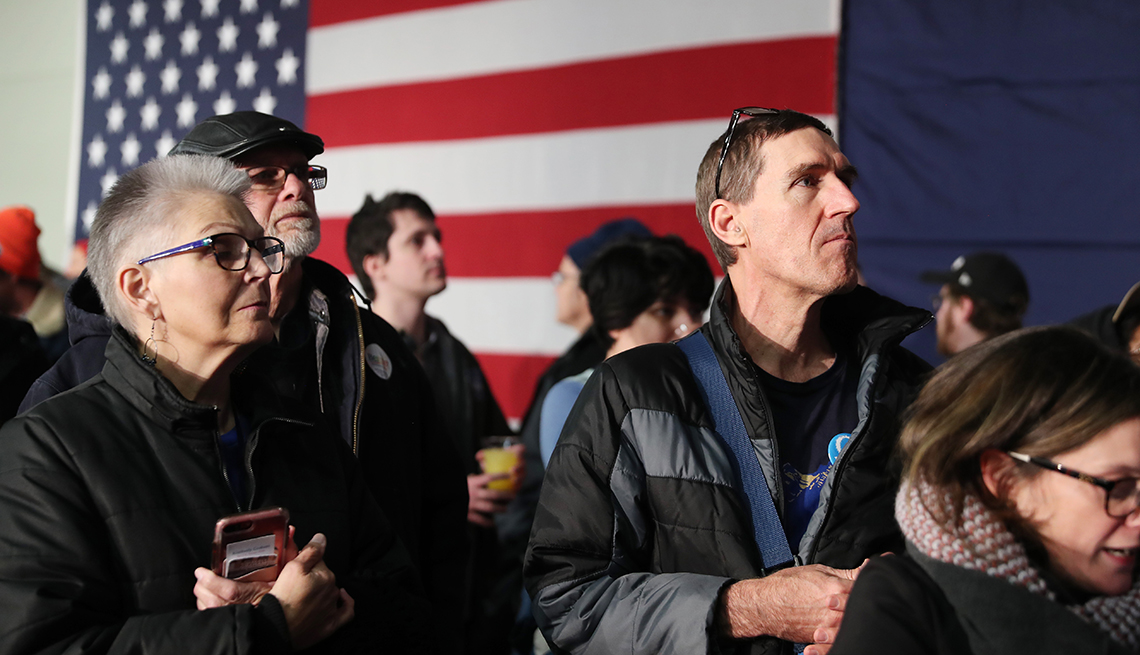 En español | Jim Davis says he's had a front-row seat to electoral history for more than four decades and he has always gone to his Iowa caucus firm in his decision about who he wanted to be the Democratic nominee for president. But for the first time, he went to Monday night’s contest not knowing who he would support.

"I've never seen so much indecision in all my years,” Davis said before presiding over a caucus in Charles City, Iowa, a rural town of 7,000 people. “I'm trying to make a judgment as to who I think would be great doing the job but also shares my governing philosophy.”

Davis caucused at one of more than 1,600 sites Monday night. And 56 percent of caucus goers were 45-years-old or older, according to preliminary entrance polls reported by NBC News.

“Not only are we seeing lots of older caucus-goers, it’s clear that the 50-plus constituency is very engaged and well-versed on the issues,” said Nancy LeaMond, AARP’s executive vice president and chief advocacy and engagement officer. LeaMond was at a caucus Monday night at Drake University in Des Moines.

Sanders and Buttigieg were leading in the popular vote, followed by Warren, Biden and Klobuchar, according to partial results released Tuesday afternoon by the Iowa Democratic Party.

Four days before the caucus, a cacophony of factors was swirling around in his head as he weighed his decision. Davis, 66-year-old retired self-employed businessman, wants a candidate who will protect the integrity of Social Security and make sure it will be there when his children retire. He wants someone who will do something about the runaway costs of prescription drugs. A self-described centrist, Davis also is looking for a candidate who can win the election — but more than anything, a candidate who will be good at the job.

"What makes it different when you live in Iowa is you actually get to cross paths with folks who are saying to you: ‘I want to be the next president of the United States,'” Davis says.

How a caucus works

Any registered voter in Iowa can participate in a caucus — either the Democratic or Republican conclave. They have to be registered with the party they select to caucus with, and can register with that party on caucus night. Experts predict a large caucus turnout, especially among older voters. Brad Anderson, AARP's Iowa state director, has predicted that 60 percent of caucus-goers will be over age 50. An AARP poll of women in Iowa over the age of 50 also found that 60 percent of Democrats responding plan to attend a caucus.

It's a foregone conclusion that President Trump will win the Republican caucus, which consists of a straw poll where attendees will write their first choice on a piece of paper and the results are sent to the state party.

The Democratic caucus procedure is more complicated. Caucus-goers will arrive at 7 p.m. local time, and in some locations representatives of candidates will talk about why voters should support their hopeful. Then the caucus attendees will physically go to their respective candidate corners where they will congregate with others who support their choice. If a candidate doesn't get the support of at least 15 percent of voters at the caucus, that hopeful's supporters can physically move to another group whose candidate has more support. At this point, after some intricate “caucus math” is performed, the winners are announced.

Why this caucus is pivotal

While Davis has been a loyal caucus attendee for decades, Carol Betts says she has skipped them most years, although she's a regular voter. But she believes this election is so important that she plans to attend. But like Davis, she hasn't settled on which Democrat she will caucus for.

"I'm having a little trouble figuring out what I'm going to do,” says Betts, a 72-year-old who has had a variety of retail management jobs and other careers, including a current “gig job” delivering groceries in her community.

Electability is a big deal for Betts, and she sees flaws in every one of the hopefuls who have campaigned in the state. “I've seen Buttigieg twice,” Betts says, referring to the former mayor of South Bend, Ind., Pete Buttigieg. She says her husband has seen Massachusetts Sen. Elizabeth Warren and Minnesota Sen. Amy Klobuchar. She has friends who are trying to sway her toward former Vice President Joe Biden.

Betts says she and her neighbors in the blue-collar community of Keokuk are especially worried about how to pay for their prescription drugs and about the future of the Medicare and Medicaid programs. The current system “is crazy,” Betts says. “There has to be a better system for making sure people get the drugs they need.”

Rose Mary Pratt is zeroing in on whom she plans to caucus for. She's been a loyal caucus-goer like Davis, and for the first time since 1976 she has not been actively working for one candidate during this caucus season.

"I look at the candidates who are all well qualified,” Pratt says, adding she could easily assign cabinet slots to each of them. But she can't necessarily see which one can win in November.

"I'm looking for a unifier,” Pratt says, “and I'm not sure I'm getting the clear unification thing from anyone. I hate to see us sniping at one another. I need to go into the issues. Between health care, income inequality, people don't feel this economy works for them.” Pratt, 72, a retired state employee, says there are many people her age “who thought they had their retirement solved. Now they're still working because they need to; they are just hanging on."

Iowans are the vanguard

Davis says he's well aware that Iowa doesn't represent the diversity of the Democratic party nationwide. But, he says, “people take the job seriously to the point that if we haven't talked to each candidate twice we won't even consider them."

Pratt is bullish about Iowa being the first state in the nation to publicly make their presidential preferences known. “Why aren't my health care concerns as valid as anybody else's? Why is Medicaid any different here than in Kansas or California?"

But what is different in Iowa, Pratt says, is the ability to look a candidate in the eye and tell them what they are thinking: “I guess we believe you can find the pulse of the country here."

Editor's note: This story has been updated to reflect the partial release of Iowa caucus results.