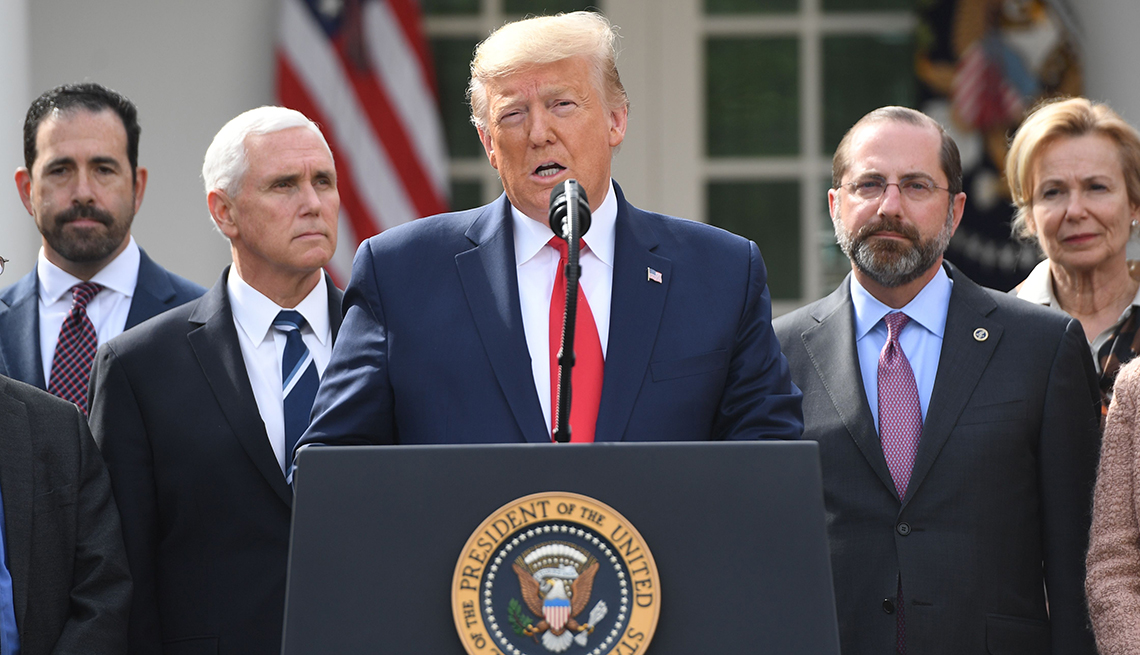 Surrounded by members of the Coronavirus Task Force, President Donald Trump speaks at a press conference.

En español | President Trump Friday declared the coronavirus outbreak in the United States a national emergency. The designation lets the federal government provide funding to state and local governments working to deter the spread of COVID-19 and also allows the Federal Emergency Management Agency (FEMA) to coordinate the national response to the pandemic.

"To unleash the full power of the federal government in this effort, today I am officially declaring a national emergency, two very big words,” President Trump said in a press conference from the White House Rose Garden. “The action I am taking will open up access to up to $50 billion” to help states and territories fight the spread of the novel coronavirus.

Declaring a national emergency gives FEMA the power to take action during “national catastrophes.” In this case, the declaration will allow FEMA access to the billions in the Disaster Relief Fund to help the nation respond to the COVID-19 outbreak. That could come in the form of additional response teams, medical equipment or additional testing, among other possibilities.

The administration also said it would take several additional steps to address the outbreak. Those include:

The administration also announced that there will be additional temporary restrictions on all visitors and nonessential personnel to nursing homes, with a few exceptions such as end-of-life situations. “We fully appreciate that this measure represents a severe trial for residents of nursing homes and those who love them, but we're doing what we must to protect our vulnerable elderly,” said Seema Verma, administrator of the Centers for Medicare and Medicaid.

During the press conference, President Trump was accompanied by executives from several prominent companies including Walmart, Target, Walgreens and CVS. These companies will work with the government to provide additional COVID-19 diagnostic testing, in some cases at drive-through sites set up in the retailers’ parking lots. The president also said that Google is working with the administration on the creation of a website that people can use to determine whether they may need to take a medical test. The administration is working with several companies to fast-track the manufacture of more tests for the coronavirus, Trump said.

In response to the dozens of colleges and universities that have closed their campuses for the spring semester to deter the spread of the outbreak, the administration also will temporarily waive interest on federal student loans.

Public health experts and policymakers had been asking the White House to declare an emergency. Earlier this week, more than three dozen U.S. senators sent an open letter to the White House asking the president to use FEMA and its relief fund in response to the outbreak. “We strongly urge FEMA to stand ready to provide emergency protective measures to prevent and mitigate the spread of disease, save lives, and protect public health and safety, should any state request assistance,” the letter says.

There are precedents for presidents using a national emergency status to respond to a health crisis. President Clinton used the Stafford Act to address the spread of West Nile Virus in 2000. Nine years later, President Obama used the National Emergencies Act to respond to the H1N1 “swine flu."