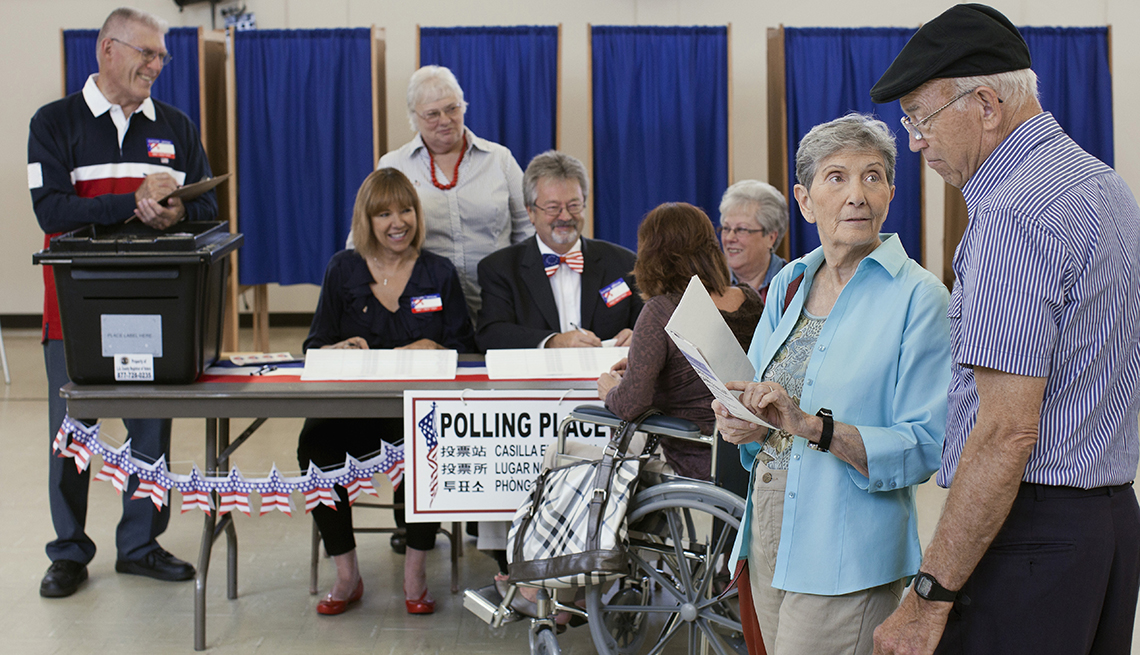 En español | Americans age 50 and older are most worried about how divided America and Americans have become, according to a new AARP national survey of registered voters 50-plus. The poll showed that 73 percent of those responding said they very often or somewhat often worry about those divisions.

“We were very struck that across Republicans, Democrats and Independents, the poll showed the older voter very much wants to see bipartisan action,” says Nancy LeaMond, AARP executive vice president and chief advocacy and engagement officer. “Over the years they’ve seen a Congress that worked, that came together in a bipartisan way to pass landmark legislation in both Republican and Democratic administrations, and I think they long for that.”

When asked to rate the performance of elected officials in Washington, D.C., 50 percent of respondents said they disapprove of the job President Trump is doing and 45 percent approve. Congress gets even lower marks among members of both parties. Sixty percent of those polled disapprove of congressional Republicans, and 57 percent don’t like the job Democrats in Congress are doing. More women (54 percent) disapprove of the president than men (46 percent), but men from both parties give lower marks to members of Congress than do women.

The poll of 50-plus likely registered voters covered a wide range of issues from health care to retirement, taxes and caregiving. The survey is part of the organization’s “Be the Difference. Vote” campaign designed to encourage older Americans to make their voices heard at the ballot box this fall. Historically, older Americans vote in larger numbers than any other age group.

The survey highlights a trend in American politics: Voters aren’t all waiting until Election Day to cast their ballots. Sixty percent of those responding said they plan to vote on Election Day, while 19 percent say they’ll take advantage of early voting in their state and another 18 percent expect to vote by absentee ballot.

When it comes to issues that older Americans say will directly influence their vote in November, lowering health care costs, strengthening and reforming Social Security and Medicare, and lowering prescription drug costs will be uppermost in their minds, the survey revealed.

“Despite all the divisiveness out there, older Americans have a pretty good consensus of what’s important to them: Medicare, Social Security, helping people live independently later in life,” LeaMond says, adding that the AARP poll shows that those sentiments are evident across party lines.

Respondents strongly (66 percent) support allowing Medicare to negotiate directly with pharmaceutical companies for lower prices. In addition, 78 percent want to keep a law requiring name-brand drug manufacturers to pay a higher share of the costs of medicines for Medicare enrollees with high drug bills who are in the Medicare drug coverage gap known as the donut hole. Drug companies are strenuously lobbying to pay a lower share.

An overwhelming majority, 84 percent, of older adults believe it would be unfair to force individuals with preexisting conditions to pay more for their health care. Federal law allows insurance companies to charge Americans over 50 up to three times more for their health insurance than younger people. About 83 percent of those surveyed oppose proposals that would allow insurers to charge 50-plus consumers five times what others pay, saying that such a change would make insurance unaffordable to those who need it most.

Just over half (52 percent) of respondents say the new tax law that Congress passed last year will hurt them, while 22 percent said it would help and 15 percent believe it won’t have any effect on them financially. More than half (55 percent) do not believe they will personally receive any reduction in their taxes under the new law.

The survey also revealed that more than half (55 percent) of older adults either provide unpaid caregiving to a loved one or have provided such care in the past. By large margins, voters want to protect the rights of those caregivers. Eighty-seven percent support proposals that would prohibit companies from firing an employee for taking time off to care for a family member, and 86 percent support requiring employers to allow workers to use their existing sick leave for caregiving.

The AARP national telephone survey of 802 likely registered voters over 50 was conducted from July 7 to July 12. The poll has a margin of error of plus or minus 3.5 percentage points.