En español | A fake phone number for Amazon.com almost tripped up an 81-year-old man from West Virginia. A retired educator, he says his wife placed an order for two iPhone cases on Amazon.com, but when she tried to log back into her account, she couldn't. She couldn't reset her password, either.

A relative went online for an Amazon customer-service phone number and when the retiree called it, he was told that a $4,800 television had been charged to the account, which reportedly had been hacked by more than 40 people in Mexico. To rectify the situation, the retiree was told, he could use one of two preferred companies to prevent more computer intrusions and get back the information that the hackers may have obtained.

The victim, who spoke to AARP and asked that his name not be used, chose one of the suggested companies. But when the phony Amazon rep transferred him to the computer company, he heard a voice that sounded identical to that of the original fraudster.

"I asked, ‘What government agency has oversight over you?’ “ the retiree says. “He never answered my questions to my satisfaction."

Still, the man chose a $999 “lifetime” option, in hopes of resolving the hacking situation for good. The fraudster, from a distance, even arranged for an authentic-looking receipt to be printed on the retiree's printer.

Soon, more red flags popped up. The swindler said payment could be made only by money order. That prompted the victim to call AARP's toll-free Fraud Watch Network Helpline, 877-908-3360. As instructed, he refused to pay one red cent to the con artist.

He also went to his bank to have his account monitored, called his credit card issuer so that purchases on his card could be monitored and took his computer to a bona fide expert for a cleanup.

Regrettably, that money is probably gone for good, says Amy Nofziger, AARP director of Fraud Victim Support, who oversees the helpline. She says the dismay and distraction people feel amid blaring headlines about the coronavirus are what scammers count on as they lie, cheat and steal. The crooks are playing on people's anxiety while hiding behind the credibility of Amazon's brand, she adds.

Amazon, an online behemoth with $281 billion in sales in 2019, has long been an attractive target for fraudsters. The Seattle-based company, however, does not disclose the scope of the problem or whether fraud reports have increased since the pandemic-triggered boom in online buying.

AARP's helpline reports a jump in complaints about frauds tied to online sales in April, May and June, compared with earlier in the year, Nofziger says. Here's her advice: 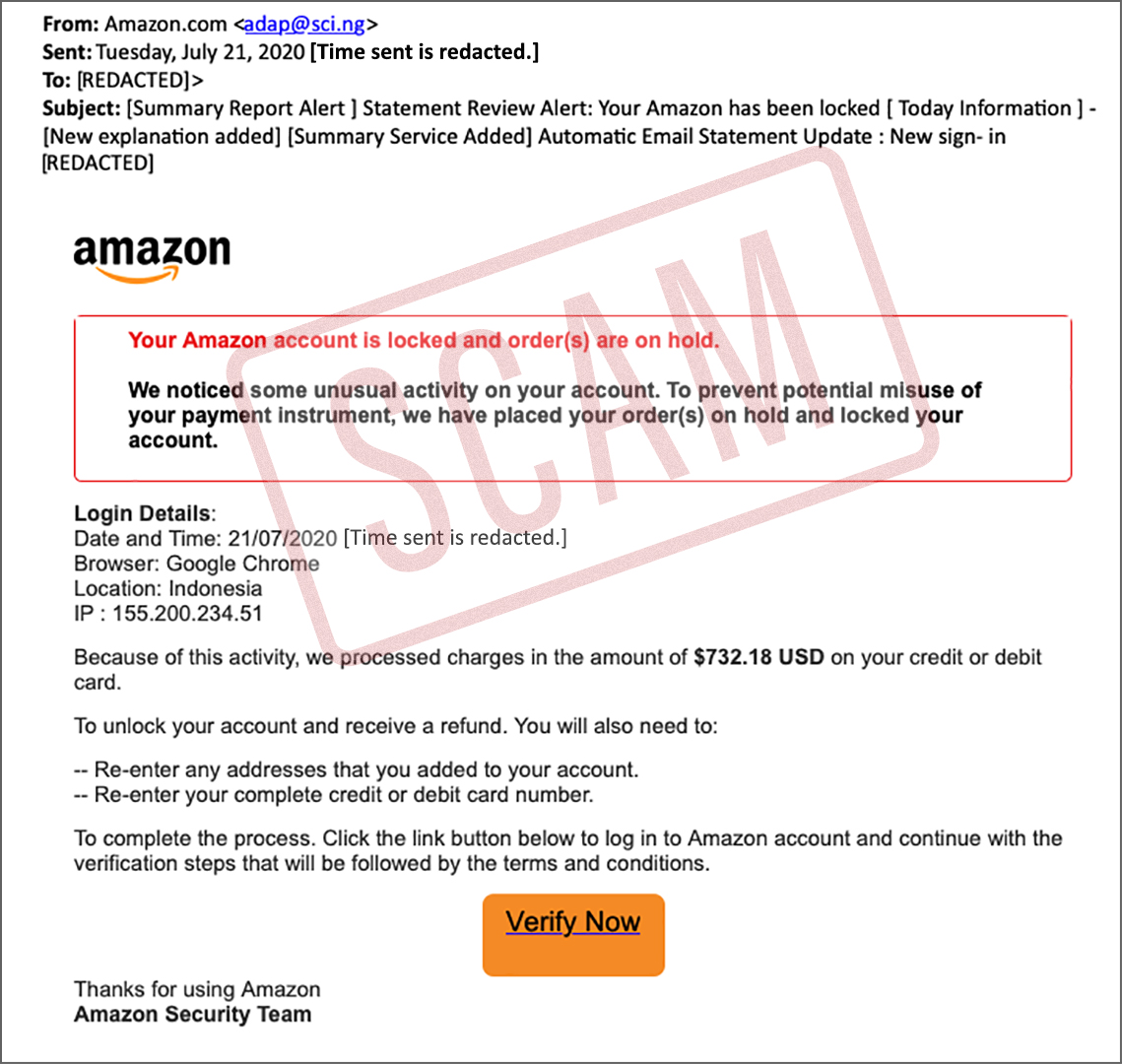 Fraudsters try scare consumers into giving up personal information with fake security alerts, like this one purporting to be from Amazon, says Theresa Payton of Fortalice, a cybersecurity firm. Nefarious crooks may utilize “burner emails” for a short time, then abandon them, and even the savviest of digital shoppers have been victims of such fraud, she says.

Theresa Payton, CEO of Fortalice Solutions, a cybersecurity consultancy in Charlotte, North Carolina, suggests that consumers consider using one credit card for all online purchases, to be better able to spot potential fraud. Meantime, they should consider setting up alerts for all card transactions, she says.

Advice from the real Amazon

Amazon, for its part, advises consumers to watch for scams by looking for misspelled words in unsolicited emails, requests to update payment information and prompts to install software on their computer.

Use this link to file an online report to Amazon about spoofing and suspicious emails.

Here's more from Amazon on fraud.

Looking back, the 81-year-old retired educator has learned important lessons about how unscrupulous and persuasive cyberthieves can be. “It all sounded so plausible,” he says of their web of deceit. “I've always thought, I'm too smart to be fooled. But they make you think something bad is going to happen if you don't go along, no matter how many red flags go up."