Folks over age 65 make up only an eighth of the U.S. population but as many as a third of all scam victims. There are three common explanations for this disproportionate vulnerability: memory loss, loneliness and a supposedly more trusting nature.

So what explains all those older folks who don't fit these descriptions but still get scammed?

Research suggests answers that go beyond the three main explanations: The natural aging process can cause subtle shifts in mind and mind-set that open the way for scammers in unexpected ways. 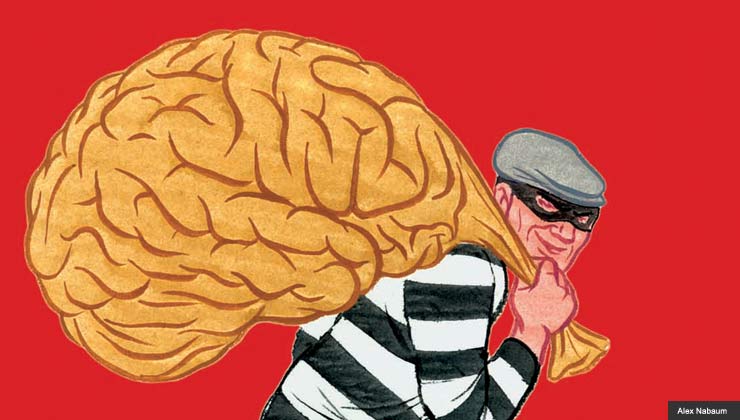 Starting in our 30s, our brains begin to shrink, says Virginia Templeton, director of MemoryCare, an Asheville, N.C., facility that treats people with memory disorders. With normal aging, the pace of processing information slows, becoming more noticeable in our 60s. "In people with early memory loss, even before it's clear that there may be a problem, judgment, reasoning ability and decision-making skills may change," she says. "And in many scams — telemarketing, fake lotteries — you have to 'act now!' "

These demands for speed, of course, are there for a reason. "Unless you're patient enough to give yourself more time to process everything, you can be more vulnerable," says Templeton.

Research also finds that other changes that are frequently shrugged off as memory loss become more common after age 65. For instance, if they're repeated enough, you might believe false statements such as "You forgot to pay me!" or "We agreed on this price." Your defense is to write everything down.

And ability to grasp details such as contract terms can start to wane daily at around 2 p.m. Scammers often call late in the day.

It's loneliness or feeling undervalued that boosts a senior's risk of falling for scams by 30 percent, suggests new research by Peter A. Lichtenberg of Wayne State University's Institute of Gerontology. Both states of mind, he says, "fall under the need of having status in society and those needs not being met. It comes down to feeling socially isolated."

Even if lots of family, friends and coworkers are around, a thoughtless remark, a rude store clerk or private worries can cause a sense of being unappreciated or unnoticed to take root. Scammers step in to provide fake emotional support — while taking your money.

It's often said that seniors tend to take people at their word. But studies find that many older people are in fact better at detecting lies than younger folks. Still, older people "tend to be more patriotic and more religious," says neuropsychologist Stacey Wood of Scripps College, traits which the bad guys can sometimes exploit.

Patriotism can open the door to scammers who pretend to be from a government agency or a veterans group. Being religious, meanwhile, can make people vulnerable to cons involving fake charities or other supposed good causes.

Finally, studies show that age can dull the ability to spot warning signs that are obvious to younger people. A possible explanation for that: "Compared to other age groups," Wood says, "older adults tend to have a more positive outlook."