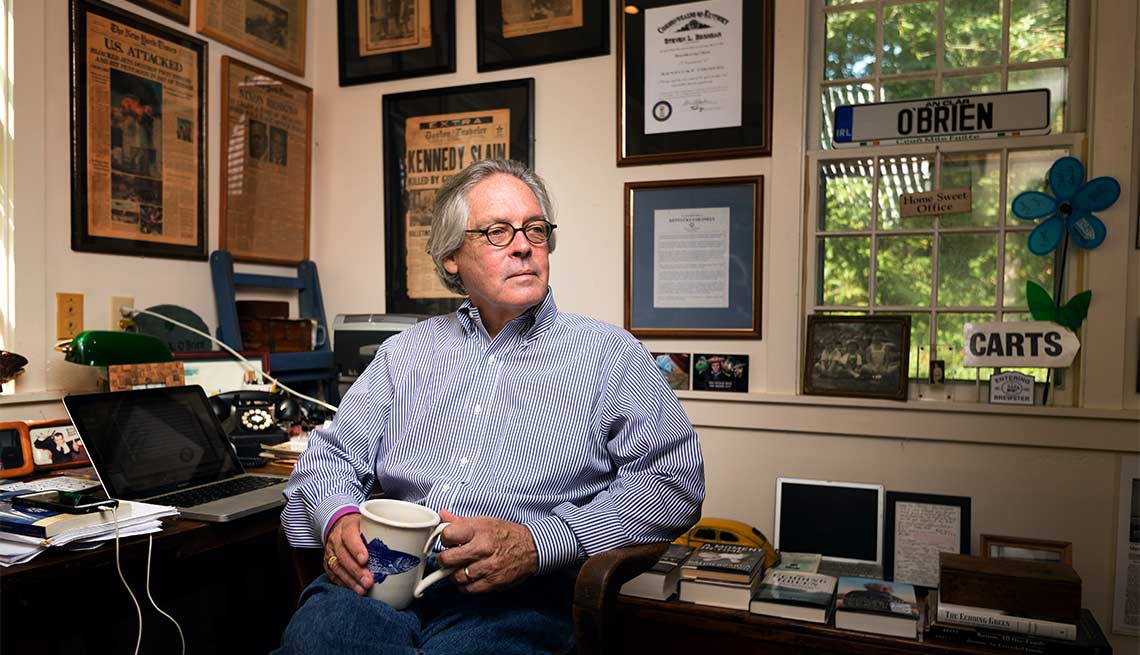 Greg O'Brien, author of "On Pluto: Inside the Mind of Alzheimer’s", says people who have Alzheimer’s tend to spend money they don’t have, which can cause financial problems.

Indianapolis financial adviser Leslie Thompson saw the signs of dementia in her client even before a doctor's diagnosis confirmed it last year.

The woman, in her early 80s, suddenly started bouncing checks and asking for cash withdrawals from her account a couple of times a week. Thompson set up a bill-paying system to help the client, the second in two years to begin suffering from dementia.

Regulators and financial firms are starting to tackle the issue of serving clients with diminished mental capacity — something not covered under federal regulations and addressed by only a few states. Alzheimer's disease, the most common form of dementia, now affects 5.1 million Americans 65 and older — a number that's expected to nearly triple by mid-century, according to the Alzheimer's Association. Already, financial advisers typically serve at least seven clients with Alzheimer's or other dementia, according to a 2012 study by Cerulli Associates. Current regulations require advisers to protect a customer's privacy and promptly execute orders, even if they're imprudent. Advisers worry that by following the rules, they could later be sued by, say, the customer's family, claiming the client didn't have the capacity to make financial decisions.

Daniel Marson, a neuropsychologist and director of the Alzheimer's Disease Center at the University of Alabama in Birmingham, says warning signs include memory lapses about money, failure to pay bills or paying them more than once, and new difficulty comprehending money concepts.

"The most important warning sign is a change in the person's risk preferences and choices regarding how to invest money," Marson says. "They are interested in get-rich-quick schemes that they wouldn't have paid attention to 10 or 15 years earlier."

Financial advisers often are among the first to recognize a client's illness, because money handling is often the first skill to fade. "That's the way it was with me," says Greg O'Brien, a 65-year-old political consultant and publisher from Brewster, Mass. He was diagnosed with Alzheimer's six years ago and is in the early stages of the disease.

O'Brien, author of On Pluto: Inside the Mind of Alzheimer's, says people with the disease tend to spend money they don't have. "You want to take away the credit cards," he says. O'Brien's wife did just that. He now uses a debit card, which allows his family to monitor his spending online.

It hasn't always worked. O'Brien recalls a Christmas a few years back when he forgot he already bought presents for the family. With only two days left until the holiday, he searched the house, found a hidden credit card and went on a shopping spree. He spent $800 within 45 minutes on such things as shot glasses, gloves decorated with funny faces and kid-sized clothing for his adult children.

After realizing what happened, O'Brien's family returned the gifts and made him fork over the credit card. Even using a debit card, though, O'Brien sometimes makes multiple purchases of things he likes, such as six jars of pickles at once.

"See the trend here? Imagine if I were still buying cars," he says.

When mental capacity is in doubt

The prospect that someone with a cognitive disorder might quickly deplete a nest egg or fall victim to a scam is why regulators, financial institutions and consumer advocates are trying to get ahead of the problem.

"The silver tsunami is upon us, and it will continue for the next 15 years. We will see a large portion of our population turn 65," says Lynne Egan, chair of the senior issues and diminished capacity committee for the North American Securities Administrators Association (NASAA). "One-third of those people will have some diminished capacity, mostly related to general aging, but some will be as a result of dementia."

Some investment firms, including Merrill Lynch, Transamerica and Edward Jones, have started educating their advisers about the warning signs of dementia and elder financial abuse. Baltimore-based Transamerica, for instance, within the past year published financial guides for advisers and caregivers dealing with people with dementia.

When a client's capacity is in doubt, some firms will go so far as to freeze a questionable transaction and contact the client's family, Egan says.

"Sometimes we may have to make a phone call, not to give away account information but to say to the daughter in Dallas, 'We have concerns about your mother. You need to fly back to St. Louis,' " says Ron Long, director of regulatory affairs and elder client initiatives at St. Louis-based Wells Fargo Advisors.

Long recalls a case recently where an 83-year-old client could not be convinced he was the target of a lottery scam. Wells Fargo held off sending money from the man's account to the bogus lottery and contacted his son, who was able to persuade his father of the truth, Long says.

He was forgetting things that he'd always handled before, such as paying bills. Sullivan and his doctor initially thought the changes were related to the stress of his job as a senior executive at a Boston financial services firm.

But Palomera insisted on a diagnois from a neurologist. It was not good news. At 47, Sullivan had early onset Alzheimer's.

The couple doesn't have long-term care insurance. And now her husband is ineligible for it, Palomera says. With daughters ages 10 and 12, the couple needed to assemble a team of experts, including an elder law attorney, to assist with long-term planning.

Unable to perform his old job, Sullivan is now on disability and spends time volunteering. "When I first got the diagnosis, I thought it was the end of my life," he says. "Now I know that you can live a good life with it. It's a little more complicated, but it's still good."

The family's experience has convinced Palomera that financial advisers need to be more aware of potential health issues. "As part of the new client process, they really should cover some nonfinancial things" like family medical history, she said.

What can be done

Firms are looking for solutions. Some have introduced new forms that allow customers to name a relative or other person to be contacted if they show signs of diminished capacity, says Susan Axelrod, an executive vice president with the Financial Industry Regulatory Authority (FINRA), which oversees brokers and securities firms.

Wells Fargo Advisors last year launched an Elder Client Initiatives team to answer questions from its advisers around the country on how to handle cases of suspected dementia or report elder financial abuse in their state. It can be complicated because each state handles these situations differently, says Long, who heads up the team.

Yet these differences may be gradually disappearing. Missouri in June became the third state to allow investment firms to delay for 10 days the release of funds from the accounts of older clients who may be victims of financial exploitation, giving the firms time to contact authorities or the family. NASAA has been working on similar legislation that could be adopted elsewhere.

The investor advocate for the Securities and Exchange Commission wants to see a comparable regulation on the federal level. FINRA, too, is proposing a revision to its rules so brokerages can delay withdrawals from an older customer's account if fraud is suspected, Axelrod says.

Meanwhile, AARP is working with the American Bankers Association Foundation to produce education materials for consumers, financial caregivers and bankers on age-friendly banking, including how to address dementia, fraud and financial caregiving. A survey to be released next month by the AARP Public Policy Institute found that around 8 out of 10 older consumers and caregivers want banks to offer fraud prevention tools and to train employees to prevent elder financial abuse. "Banks can look at what the warning signs are so they can help provide better customer service for that person who has dementia," says Jilenne Gunther with the institute.