En español | Harold Alfond, founder of the Maine-based Dexter Shoe Co., had an entrepreneurial epiphany in the mid-1960s. Rather than continue to sell the occasional pair of slightly irregular, "factory-second" shoes manufactured in his plant to jobbers — who in turn marked them up exponentially and sold them to the public — why not cut out the middleman and sell the defects directly to the public himself?

With that, the concept of the factory outlet store was born.

The idea soon proved to be almost too popular for its own good. With Alfond opening more and more of his log cabin-style Dexter Shoe outlet stores throughout New England, public demand for his factory seconds became so great that his factory couldn't keep up — they simply weren't making enough mistakes! So he then also began stocking discontinued styles and other merchandise he couldn't sell in his outlet stores, all at rock-bottom prices. Before long, manufacturers of all types of consumer products were following Alfond's lead and opening factory outlet stores of their own. And soon entire shopping malls of factory outlet stores began springing up across the country.

Although I've never shopped at a Dexter Shoe factory store, my family started shopping at factory outlets in the early 1970s, when they were still the cool new thing. In fact, I grew up wearing only Jockey brand, factory-second briefs that my mom would dutifully buy for all of the men in our extended family on an annual pilgrimage to the Jockey factory outlet store.

I still occasionally visit a factory store or outlet mall, but over the years I've noticed a lot of changes at them. Like many of my cheapskate friends, I'm not convinced that they're still the bargain meccas they once were, although you can still find some good deals at outlets if you're a smart shopper. Here's what you need to know:

Protect Against Impulse Purchases
It's no coincidence that factory outlet stores are often in the middle of nowhere. Marketing experts say that it's at least in part to get you to invest enough travel time and expense so that you're inclined to buy more, including things you didn't originally intend to buy. After all, since you've come all that way, why not shop 'til you drop? There are many ways to avoid making impulse purchases that you'll regret later, but it all starts with going armed with a shopping list and sticking to it. 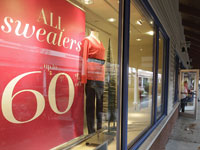 Compare Prices Before You Go
One of the challenges of finding true bargains at outlet stores is in knowing a truly good price when you see one. Price tags at outlet stores typically show the "original," "compare at" or "manufacturer's suggested retail" price, and then the shockingly low, discounted price you're being asked to pay at the outlet. But don't get out your wallet so fast, since the savings might not be as great as they seem.

The same item (particularly end-of-season items) may already be marked down — sometimes even lower — at a regular department store. Or the comparison price on the tag may be an inflated figure invented by a marketing department that no shopper has actually ever paid. And since you don't have the ability at most factory outlets to compare prices of various brands in the same store, you'll have difficulty knowing if the outlet price is a good value.  Again, the solution is to do your homework in advance and go to the outlet mall with a list of how much the items on your shopping list are currently selling for elsewhere.

Next: Can you haggle at an Outlet Mall? »

Beware of Inferior Quality Merchandise
Make sure you're comparing apples to apples when it comes to the quality of the merchandise as well as the price. A study by Consumer Reports found that some manufacturers produce lower quality versions of their products to sell at outlets, even though nearly 80 percent of the outlet shoppers they surveyed were unaware of any differences. Compare exact model numbers of electronics and appliances, and carefully check things such as fabric quality/content and stitching on apparel items.

Ask for a Further Discount
A number of my Miser Advisers have confirmed that a little haggling can pay off when shopping at outlets. If an item is damaged or the last one on display — or if you're interested in buying more than one of the same item — ask to speak to a manager or supervisor, and politely ask if he or she can do any better on the price. One Miser Adviser reported getting an additional 50 percent off when she bought the last bread-making machine they had on display, simply by asking and pointing out that the box had been opened. "That's a lot of dough," she told me with a wink. Here are some more tips on how you can negotiate a better price on just about anything.

Check Warranties on Factory-Second Items
One of the reasons I don't shop at factory outlets so much anymore is that fewer and fewer of them seem to carry truly factory-second merchandise. Apparently, underwear manufacturers are no longer mis-stitching their elastic waistbands as often as they did when I was kid, and I kind of miss that. I liked saving a bundle on a usable but slightly irregular item; I viewed it as owning a one-of-a-kind and it made me feel special. When you do still find factory-second items — as well as refurbished tools, appliances and electronics — check the warranties carefully to see if you have any recourse should the product have problems down the road.