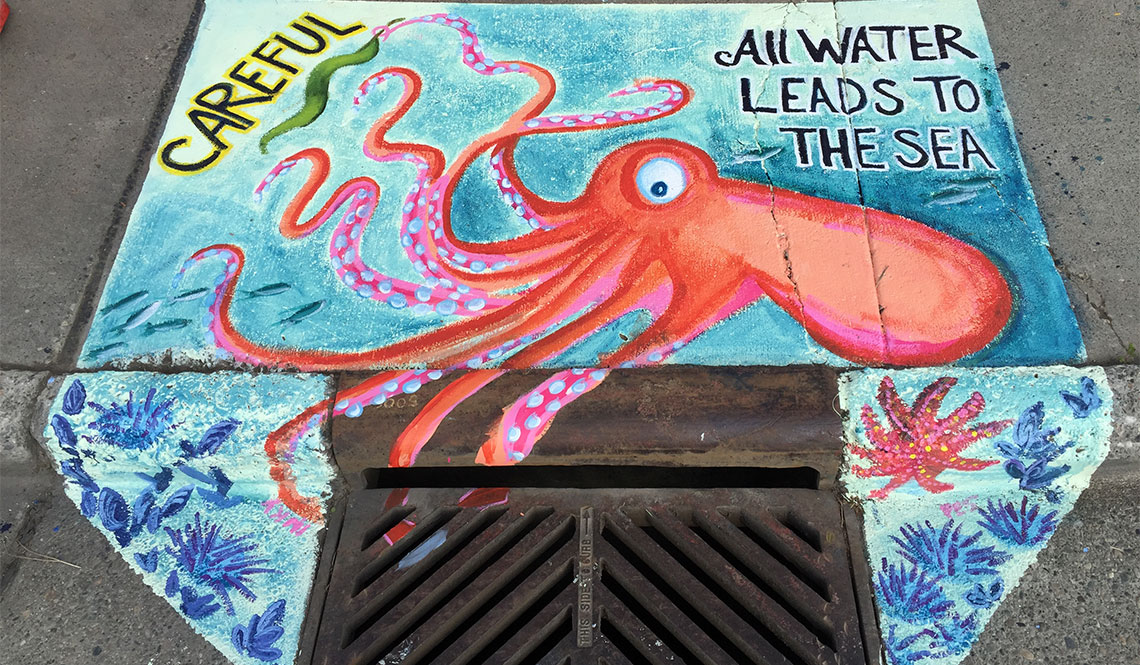 This street-surface painting by Pam Seiser is called "Inky." Follow the link at the end of this article to see more examples of storm drain art in Fairbanks, Alaska.

Storm drains from the streets of Fairbanks empty directly into the Chena River, a habitat for moose, beaver, fish and migratory birds.

Unfortunately, many people mistakenly believed the drains connect directly to the sewage-treatment plant, and used them to dispose of harmful substances like used motor oil. To change that harmful behavior in an educational and creative way, Tanana Valley Watershed Association, a local environmental nonprofit, teamed-up with the Fairbanks city government and local businesses.

Established in 2014, the Storm Drain Art Contest seeks proposals for street art based on the themes Storm Water Pollution (to draw attention to litter, vehicle fluids and pet waste), Wildlife (art featuring native birds, fish and mammals) and Quality of Life (focusing on the life-giving and recreational uses of water).

Proposals are put to a public vote, and the chosen artists — who range widely in age and experience — are commissioned to create their scenes using Fairbanks' street grates, sidewalks and roadways as their canvas, earning $100 for the work and $50 for materials.

Additional partners include the Fairbanks Stormwater Advisory Committee, the Downtown Association of Fairbanks and the U.S. Fish and Wildlife Service. Improvements in water quality since the contest began have led to national recognition for the city's environmental efforts.

In another beautification project, Cushman Street, one of Fairbank's main thoroughfares, was upgraded by bringing three chaotic traffic lanes down to two (a technique often referred to as a "road diet"; adding trees, planters and better lighting; and improving the roadway's traffic signals, directional signage and street drains.

Embossed into the iron of the new drains are the words "Dump No Waste" because runoff "Drains to River."

This article is an excerpt from the "Arts, Entertainment and Fun" chapter of the AARP book Where We Live: Communities for All Ages — 100+ Inspiring Ideas From America’s Community Leaders. Download or order your free copy.