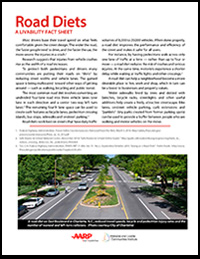 Download the Road Diets fact sheet to learn how road diets help improve towns and cities for people of all ages.

Most drivers base their travel speed on what feels comfortable given the street design. The wider the road, the faster people tend to drive and, the faster the car, the more severe the injuries resulting from a crash.

Research suggests that injuries from vehicle crashes rise as the width of a road increases.

To protect both pedestrians and drivers many communities are putting their roads on "diets" by reducing street widths and vehicle lanes. The gained space is being reallocated toward other ways of getting around — such as walking, bicycling and public transit.

The most common road diet involves converting an undivided four-lane road into three vehicle lanes (one lane in each direction and a center two-way left-turn lane). The remaining fourth lane space can be used to create such features as bicycle lanes, pedestrian crossing islands, bus stops, sidewalks and on-street parking.

The authors address various myths about road diets. Here are a few:

Road diets actually increase and enhance business activity by reducing traffic speeds (which helps motorists notice the shops, eateries and businesses they’re driving alongside) and by accommodating pedestrians and bicyclists (who tend to spend more money at local businesses than drivers do).

The Road Diets fact sheet can be used by policy makers, transportation planners, community leaders and citizen activists to educate themselves and others about the neighborhood benefits of having narrower roadways.

The page "How to Get it Right" offers steps advocates and community leaders can take to encourage putting wide, unsafe roads on a diet.

Among the suggestions: Locate a pilot project on a road that carries no more than 15,000 vehicles a day and that ideally serves a downtown neighborhood or historic district with potential for reinvestment and/or economic development.