Photo by Glen E. Ellman/City of Fort Worth

Bicyclists in Fort Worth, Texas, from the Engagement chapter of "Where We Live."

From social activities to civic action, having the opportunity to connect and feel welcomed strengthens our social fabric. A livable community fosters interactions among people and between people and institutions — face-to-face or online — that adds value to our lives and supports community involvement with local government

Opportunities to connect with neighbors, meet new people and contribute ideas and skills to local institutions help people of all ages thrive. Creating new ways for residents to get involved in their communities brings diverse voices into conversations about how to make a community stronger and what programs and policies local government should prioritize.

Residents expect to be heard by their leaders on the issues that matter the most, and frustration can arise when people feel like they aren’t being heard. Engagement creates an atmosphere where neighbors help neighbors, government listens to its citizens and no one of any age is left behind. Mayors are reaching out to local residents and helping them connect with one another and with their government.

Book cover of Where We Live 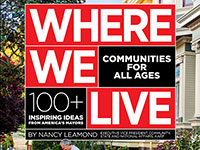 Here's What Mayors Have Been Doing

Photo by Wales Hunter/City of Louisville

Greg Fischer took office, this former businessman set out a clear set of values that would guide his administration. One of those values — compassion — has become his signature initiative.

To Fischer, compassion is a critical element of building a strong community. It's people helping people, asking for nothing in return. It's treating everyone, of all ages and from all walks of life, with respect. He traces his focus on com­passion to his parents: his mother, who he says helped other people all the time, and his father, who treated everyone, "from the head of a com­pany to Sam the shoeshine man," the same.

In 2011, Fischer signed a resolution commit­ting Louisville to a multiyear Compassionate Campaign that seeks to empower and engage members of the community to help their neigh­bors in ways big and small. The program builds on an active network of nonprofit organizations and education institutions and encourages acts as simple as shoveling snow or reading to children as well as larger efforts such as partici­pating in community beautification projects and mentoring programs.

One of the campaign's key initiatives is the mayor's annual Give a Day Week, which calls on Louisville residents to donate time during the week to community service: donating blood, volunteering at a local food bank, working with Habitat for Humanity on homebuilding projects and engaging in other activities. In recent years, more than 160,000 people of all ages from all parts of the city participated in Give a Day, which aims to make getting involved easy and bring people together who otherwise would never meet. Fischer hopes that will move the city closer to his goal of compassion: helping residents of all ages, from all walks of life, meet, work on common goals and develop greater understanding of and respect for each other.

Lioneld Jordan, in partnership with the University of Arkansas and the local chamber of commerce, is spearheading a multiyear effort to transform this college town into a truly age-friendly city.

The first step is a five-year assessment and planning process, currently under way, that engages community members in multiple ways. An online survey gauges perceptions of the city, and a series of focus groups — 90-minute discussion sessions with 10 local residents aged 45 and up — solicit input on how Fayetteville can better support an aging population. To collect data for a community needs assessment, teams of college students are fanning out across the city inspecting parks, buildings, roads and transportation options. Fayetteville hopes that by engaging its citizens and taking a comprehensive look at the city, it will be able to adapt its structures and services to be more accessible to older residents.

Learn more: Website for the City of Fayetteville | Fayetteville is a member of the AARP Network of Age-Friendly Communities
Summary published June 2016

Photo by Glen E. Ellman/City of Fort Worth

Fort Worth Mayor Betsy Price during a Walking Town Hall.

Mayor Betsy Price puts a premium on face-to-face interaction with her constituents. But she knew she needed a creative approach to get residents of all ages engaged and involved.

An avid bicyclist, Price started inviting residents to join her on rides around the city for what she called Rolling Town Halls. (The first photo in this article shows Price, in the yellow helmet, during one such gathering.)

The rides — usually five to seven miles, lasting about 45 minutes — have generated productive discussions on issues of interest to residents, from ways to implement recycling programs to steps residents can take to deal with bird infesta­tions.

To engage with residents who are more comfortable on two feet than two wheels, Price launched Walking Town Halls — one-mile walks that focus on a street-level look at neighborhood improvements and needs. Launched in 2011, the programs continue, with multiple walking and rolling sessions scheduled each month.

Learn more: Website for the City of Fort Worth | Fort Worth is a member of the AARP Network of Age-Friendly Communities
Summary published June 2016

After he was elected at age 22, the youngest mayor in Holyoke's history reached out to the city's oldest residents to make sure their voices are heard. Together with the city's police chief, Mayor Alex Morse launched a Senior Residence Touring Initiative, personally visiting with older adults where they live, since many would not otherwise be able to travel to city hall. The tour fulfilled a campaign promise made in response to residents' interest in staying connected with the mayor and other city leaders. Public safety and crime preven­tion were the primary topics of Morse's first tour, resulting in important feedback that was used to create plans for a safer community.

When the national crowd-sourcing review com­pany Angie's List is headquartered in your city, it's only natural that you turn to technology to crowd-source public safety. Mayor Greg Ballard partnered with Angie's List to create an online forum to help neighbors connect with neighbors and local police stop crime.

The secure network, called Band of Neighbors, is free to use and tai­lored to the city's 840 different neighborhoods. To make sure that discussions are relevant, only residents of a particular neighborhood can par­ticipate in that community's forums. Similarly, law enforcement or other announcements are posted only to discussions for the affected area. The network is designed to help residents of all ages stay connected and feel safe in their homes and their neighborhoods.

Ini­tially, 120 faith leaders joined with city officials to develop a framework for ongoing engagement around problems that impact a broad spectrum of Las Vegas residents — addiction, strength­ening families, jobs, education, homelessness and human trafficking. The city continues to play the role of convener, providing support and guidance to the initiative's representatives, who meet monthly to keep up the momentum. Specific programs developed through the Faith Initiative include parenting classes, school partnerships and a series of community forums about addiction.

To keep its aging population energized and engaged in community life, Miramar operates two senior centers that serve as hubs for a range of activities. Under the direction of then-Mayor Lori Moseley, the city expanded one center and established the second, hiring Spanish-speaking staff to serve the city's large Latino population. Local residents come together for cultural activ­ities and group wellness programs.

The Gener­ation 2 Generation program strives to promote lifelong learning and connections between children and the 50-plus community, with special holiday celebrations and a Rainbow Readers club, where members share their knowledge and love of reading with elementary school students.

Mayor Mitch Landrieu wants the city's budget to reflect the needs and concerns of all New Orleans residents. To make sure everyone has a voice in the process, he and the city council hold community meetings in each council district to hear directly from residents. The entire process is results-oriented, with city agency budgets built around what it will take to achieve resi­dents' priorities. Each community meeting is preceded by a separate event where citizens can meet one-on-one with city officials to talk about specific ideas and concerns.

Charlie Hales takes a data-driven, high-tech approach to sharing information with his constituents. An innovative website he calls Portland's Dashboard lets residents track the progress of priority initiatives. The Dashboard highlights key indicators and up-to-date data in at-a-glance charts, graphs and infographics to show where the city is making strides — and where things are falling short. Hales sees the dashboard as an important tool for government accountability as well as a way to encourage community involvement in developing public policy. But most of all, the dashboard is a mech­anism to create a shared sense of accomplish­ment across all geographic and demographic boundaries. "Information is power," hails the dashboard, "and these metrics can help citizens hold city leaders accountable."

Learn more: Website for the City of Portland | Portland is a member of the AARP Network of Age-Friendly Communities
Summary published June 2016

Powered by MindMixer, a civic-minded tech start-up, the site's chat forums are interactive real-time discussions about local issues among members of the community and city officials. Often, city leaders pose questions to prompt a virtual dialogue: How would you rate your feeling of safety? For every $1,000 of community funds, how would you divvy up the money? Do you support proposed utility rate increases? Putting the forums online is aimed at giving more people — from busy working parents to tech-savvy seniors — a chance to engage without having to travel or attend an in-person forum.

Every year, the city of Wilmington celebrates the community engagement of local residents with The Wilmington Awards, a recognition program established by Mayor Dennis Williams. The awards are presented to individuals of all ages who have excelled in the arts, business, educa­tion, athletics, environment, health or science as well as those who have made significant contri­butions to the faith community and human and civil rights and through community service. In 2015 Williams created the annual Thomas L. Cottingham Good Samaritan Award for acts of bravery and kindness. The inaugural award went to a resident who gave his life protecting a woman and her baby from a knife-wielding attacker.

Read more from WHERE WE LIVE »

Our Other Insipiring Resources Include