The AARP Purpose Prize honors people 50 and older who tap into the power of life experience to build a better future. Find out more and apply.

When he was running for the Portland City Council in 1992, Charlie Hales had a sense of what was in store for Oregon's largest city. "Portland is about to grow," he told voters. "And how we grow is very important." That year, Portland's population was about 450,000.

Hales won the election, and two more. He went on to become a champion of expanding the city's light rail, developing a streetcar and creating safe routes for bicyclists. Hales is also credited with helping build or renovate more than 100 Portland parks. When he left public service in 2002 to work on mass transit projects for a private sector engineering firm, Portland's population was about 540,000.

Another 10 years later, in 2012, Hales was back on the campaign trail, this time to run for mayor of Portland, a city of nearly 610,000. "Decades ago, Portland became an exception in the urban equation, demonstrating that cities could be livable and that urbanism didn't have to succumb to suburbia," said Hales.

The following interview with Mayor Hales was conducted by AARP Oregon volunteer Elaine Friesen-Strang for the AARP "Livable Oregon" blog.

1. In June 2010, Portland became one of the first American cities to join the World Health Organization's Global Network of Age-Friendly Cities and Communities. Why is this important for the city?

Of course we're among the first American cities to join! The building blocks, literally, for it goes back to the founding of downtown Portland, with its very short street blocks and parks within easy walking distance. Portland has been a walkable city for well over a century. Add to that the land-use decisions of the 20th century, such as an urban growth boundary that limits our ability to expand outward. (That's true for all of Oregon, not just Portland.) Plus we've embraced public transit with buses, light rail trains and streetcars. And we have such a vibrant parks and recreation system. So being an age-friendly city is in our DNA.

2. What do you hope to accomplish with the city's Age-Friendly Plan?

I have long believed fairness has to be the North Star that guides our policies. We love so many things about Portland, but we feel they should be available for everyone in Portland, not just for some. The things we love about this town, we want everyone to share. And that includes our older residents.

3. According to the National Conference of State Legislators and the AARP Public Policy Institute, nine out of 10 people over the age of 65 want to stay in their homes as long as possible. What are the challenges in creating a city where people can age in place, and what conditions could improve this possibility?

But that shouldn't be true only for a few neighborhoods. Our goal is for every Portlander to share in the things we love about Portland. So we're focusing on the neighborhoods that need attention: Martin Luther King Jr., Old Town Chinatown, Lents, Gateway. Again, it's about fairness and equity.

4. Stereotypes of Portland typically refer to attributes and trends of a younger demographic. Yet Portland's population of older residents is projected to increase dramatically by 2030. How do you see the aging population fitting within the Portland culture? What contributions and impact can older adults have on the community?

Becoming older doesn't change many of the things people love about Portland. It's a lovely place. It's walkable. People are friendly and laid back. The arts scene and the food scene are here for Portlanders regardless of age. 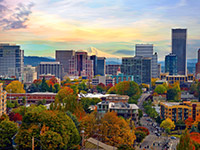 But Portland is also a place where residents can and do have a major impact on their community. Other mayors are amazed at how connected our residents are. We have land-use hearings that draw scores of people who are passionate and well-versed about land-use policy! That's rare in most places but common in Portland. And, to be honest, it's quite often our older Portlanders who get involved at that level.

Then, there are the physical activities. When you get that first AARP card in the mail, maybe you're no longer snowboarding down Mount Hood or racing in a dragon boat. Maybe you're hiking amid wildflowers in Washington Park or kayaking on the Willamette Slough instead. We have a world-famous parks and recreation system, and it's only getting better. Access to nature is definitely a draw for our older residents.

5. In 2011, the City of Portland created the Office of Equity and Human Rights.  Are there specific issues the office has identified for older adults? If so, what's being done to address their needs?

Since coming to office I have shifted the functions of the Americans with Disabilities Act (ADA) Title II and Civil Rights Act Title VI functions to the Office of Equity and Human Rights (OEHR). OEHR continues work on the resolution making Portland a model employer of people with disabilities.

Resulting from a partnership with its Commission on Disability, all videos posted to city websites must be captioned. A massive public outreach campaign was held to solicit community input on the plan to help guide the city in making its facilities, services and programs accessible to all.

The city's Civil Rights Title VI program offers guidance, fields complaints and helps ensure that no person will be denied the benefits of, or be subjected to discrimination in, any city program, service or activity on the grounds of race, religion, color, national origin, English proficiency, sex, age, disability, religion, sexual orientation, gender identity or source of income. The City of Portland also requires its contractors and grantees to comply with this policy.