As part of a multifaceted neighborhood renewal effort, the city of Providence, Rhode Island, installed 99 steel, basket-style planters along Elmwood Avenue, a business district in the historic West End/South Side neighborhood of Elmwood.

The planters, which arrived in the fall of 2014, were intended to beautify the neighborhood.

Just one problem: The funding neglected to include money for purchasing plants.

Okay, two problems: The empty planters looked just enough like the trash bins they were placed beside that they were soon filled with garbage. When winter arrived with a vengeance, the garbage became frozen inside the planters.

What was intended as a streetscape enhancement to build community pride and welcome people to Elmwood Avenue, quickly became an eyesore. 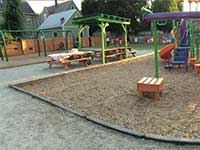 A block off of Elmwood Avenue is Peace and Plenty Park. (See photo above.) A plot of land once occupied by abandoned houses is now a beautiful community playground with great equipment. In 2014, AARP provided funds for "Fun & Safety" signage. Directly across the street is one of several community gardens that have sprung up in the area during the past few years.

Elmwood Avenue is home to the historic Knight Memorial Library, which has undergone repairs and restoration that are returning the building to its rightful place as a hub of community activity. AARP volunteers help staff a street-level discount used-book store that also serves as a meeting space.

Several Complete Streets design techniques are visible on Elmwood Avenue. These include inviting faux brick sidewalks, elevated crosswalks and beautiful new bus shelters that feature art that depicts the neighborhood's history and culture. Bike paths are being added, and a bike sharing program is in the works.

AARP Rhode Island donated enough 24-inch dwarf juniper plants to fill all 99 planters. AARP volunteers and other people in the community stepped up with money and muscle, enabling the trash-plagued planters to be transformed into symbols of how livable communities can work.

Providence’s West End/South Side represents the city's toughest core. For decades the area was known almost exclusively for its urban blight, violent crime and high unemployment. Although many homes are abandoned or in decay, improvements are slowly shaping Elmwood Avenue's side streets where historic Victorian homes are being lovingly restored. (See the box at right for more about the Elmwood area.)

AARP Rhode Island has been working with community organizations — most notably the Elmwood Avenue Neighborhood Association — as well as faith-based groups, the city of Providence, the state of Rhode Island and others to create a safer, cleaner and friendlier environment for Elmwood residents and local businesses. In order to keep the improvements rolling and help solve the planter problem, AARP Rhode Island decided to contribute the needed junipers.

The weather! Planting day was rainy and snowy with temperatures in the low 30s. Why didn't we wait until spring? The project had to be completed no later than Saturday, March 28, since the garden center had been storing the trees in a space it needed for its new spring plants.

Who Did The Work

Partner groups stepped up to provide soil and equipment. Gardening architect Chris Ackley of the Olneyville Housing Corporation led the planting demonstration. He and his crew set the junipers near each of the already-installed planters along both sides of the half-mile stretch of Elmwood Avenue so the volunteers didn't have to do a lot of lifting, carrying and walking.

With so many hands at work, the first 55 junipers were planted within 90 minutes. (The freezing rain and snow helped to encourage fast work.) Since the remaining planters were still filled with ice, a crew from Olneyville Housing and a few volunteers completed the work over the next two weeks.

The Costs (And Who Paid)

"I never thought Elmwood Avenue would ever look so good," said one resident.

"I'm so impressed with the physical progress AARP and the community has made on the streetscape. It looks beautiful!" said Julia Valles, an AARP volunteer leader.

John Martin is the communications director and Deborah Miller is the associate state director for community outreach, AARP Rhode Island.