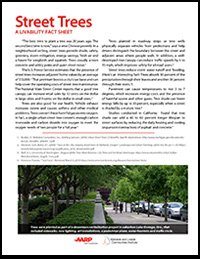 Download the Street Trees fact sheet to learn how street trees help improve towns and cities for people of all ages.

Is there a tree on the street where you live? Hopefully there's a least one tree, ideally there are many!

Among the benefits of tree-lined streets:

If some of these facts inspire you to plant a tree on your street (or to ask your municiipality to plant some trees), allow 15 to 30 feet between trees.

One of the real life examples provided in the fact sheet is about efforts in Shreveport, LA., by NeighborWoods, a national program dedicated to reforesting city greenspaces.

Beginning in 2006 student-led volunteers planted more than 20,000 trees in Shreveport, with a particular focus on three at-risk neighborhoods that had moderate to severe crime rates and a lack of community cohesion. By increasing the canopy cover, Shreveport Green offered residents a cooler and more attractive environment, which encouraged them to mingle outside and positively interact with their neighbors. The effort produced a cost benefit to Shreveport of $7.28 for every dollar spent.

The Parking fact sheet can be used by policy makers, transportation planners, community leaders and citizen activists to educate themselves and others about the importance of tree-lined streets.