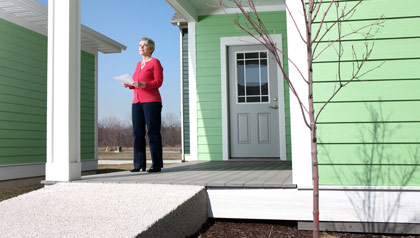 When Liz Simmons eventually sells her Hammond bungalow, she’ll look for a home with universal design features, such as this house in Burns Harbor. Among its features is an entry with no steps.

Before a knee injury seven years ago, Liz Simmons didn't think twice about the stairs in her home, a lovingly restored vintage bungalow in Hammond that she's owned since 1982.

But when Simmons found herself hobbling on crutches after surgery, those steps seemed frustratingly akin to Mount Everest.

"I'm thinking, 'If this was a permanent thing, I'd have to think hard about selling this house and moving into a one-story,' " said Simmons, 55, a public relations specialist.

She has done that hard thinking. Despite emotional ties to the bungalow, Simmons plans to sell it when the real estate market picks up even though she doesn't have any difficulty with the stairs now.

According to an AARP survey, 94 percent of Indiana residents would prefer to grow old in their current homes. But 39 percent don't think they'll be able to because, like Simmons, they live in homes with stairs and other barriers to easy accessibility.

A major issue in this desire to age in place involves design. Universal design homes have features to accommodate people of all ages and physical abilities: an entry with no steps, halls and doorways wide enough to accommodate wheelchairs, a first-level master suite and bathroom grab bars.

Luckily for the 2 million Hoosiers age 50 and older, Indiana's government and builders are paying more attention to this crucial component of aging in place.

The Indiana Housing and Community Development Authority has named aging in place a "pillar issue," promising to support the incorporation of universal design features into affordable housing and communities. The agency is developing a program to provide financing for people 55 and older who want to modify their homes.

About 230 Indiana builders have completed the three-day certification class on building and marketing universal design homes that is given by the National Association of Home Builders (NAHB).

Sarah Oudman, owner of Treasure Homes Inc. in Wheatfield, completed the certification in 2004. Last year, Oudman built her first universal design home, a 1,650-square-foot bungalow in Burns Harbor. On the market for $234,850, the home won a 2010 Livable Communities Award from AARP and NAHB.

A holistic approach to aging in place also includes nearby groceries, pharmacies and other services.

"In many ways, aging in place goes beyond services to the design of the whole community," said Philip B. Stafford, director of the Center on Aging and Community at Indiana University in Bloomington. Retail proximity is key, as are easily navigable sidewalks and easy-to-read street signs.

Although not originally designed for aging in place, naturally occurring retirement communities (NORCs) have a high concentration of older residents. They can be in apartment buildings, neighborhoods or rural areas. Social service agencies partner with residents to provide resources that allow older residents to continue to live independently.

Indiana has six NORCs: two in Indianapolis and one each in Linton, Gary, Huntington and South Bend.

Retail boutique manager Michelle Hunt-Newham, 58, lives in a Valparaiso ranch house. The house and its half-acre setting make an ideal homecoming and holiday setting for Hunt-Newham and her five grown children.

But as she looks to her future, Hunt-Newham sees the appeal of a NORC with its mix of generations and proximity to life's necessities.

"Aging in place, and you can get yourself to the store. I really think that's the next big wave," she said.

Lisa Bertagnoli is a writer living in Chicago.