When he retired in 2008, Patrick Russell assumed he would stay in Florida. He loved living in Miami. But instead, the 67-year-old university administrator and his partner wound up in a condo five states away in Santa Fe, N.M., at Rainbow Vision, a predominantly lesbian, gay, bisexual and transgender (LGBT) community with assisted living on the property. He wanted to live in a community where he was understood — and could also find medical care if he needed it.

"There weren't other places like this I knew of," says Russell.

But that is changing. Next fall, Fountaingrove Lodge, a swanky LGBT community that will have independent and assisted living as well as dementia care in Santa Rosa, Calif., is breaking ground. A handful of other gay and lesbian retirement communities already exist — and plans for more are on the drawing board.

They are just one part of the growing trend of niche or affinity retirement communities, where people who share similar interests, religions, professional backgrounds or lifestyles decide to live in the same place.

Andrew Carle, founding director of the Program in Assisted Living/Senior Housing Administration at George Mason University, estimates there are about 100 niche communities. "They are the future of housing and will explode in the next 10 to 15 years, when baby boomers hit 75," he says.

Experts maintain that the sheer number of aging boomers — 78 million — means it won't be hard to find 200 to 300 like-minded souls to form a retirement community, whatever it may be. There might be one for Jimmy Buffett fans, for example, or dog lovers, history enthusiasts, gardeners or vegetarians. One company consulted Carle about its idea of a residential cruise ship with independent and assisted living, and skilled nursing onboard for travel buffs. "The options are unlimited," says Carle.

"For the last 30 years, your choices were retire by a golf course or out in the country on top of a mountain. When you look at the generation that created 12 different kinds of Coke, baby boomers aren't going to settle for a generic retirement community or just two or three choices," says Carle. "Within 15 years, I see an LGBT retirement community in every major metropolitan city," and soon after that, "a cruise ship for retirees in every port."

Recession has slowed, but not stopped, the trend >>

Recession has slowed, but not stopped, the trend

Currently, however, developers are finding choppy waters. The economy has delayed or eliminated some projects. "Affinity communities are high risk for getting funded. There's no history, so banks are reluctant to commit," says Dwayne Clark, chairman and CEO of Aegis Living, developer of 33 senior housing communities, including one niche assisted living community for older Asian Americans called Aegis Gardens in Fremont, Calif. Aegis has four more projects in the pipeline.

Already, existing communities accommodate many different lifestyles, although not all with a formal care component. Former professional and wannabe musicians, actors, writers, artists and other creative types rent apartments at the Burbank Senior Arts Colony in Los Angeles. Retired, union dues-paying letter carriers settle at Nalcrest in Central Florida. Back-to-nature types live in their own cabins in Summertown, Tenn., at Rocinante. Rainbow's End in Livingston, Texas, is geared to RV owners, with assisted living and respite care for those who need it.

Those longing for intellectual and cultural stimulation — not to mention football and basketball games — are flocking to university-based retirement communities (UBRCs). One of the fastest-growing types of niche community, UBRCs are on or near college campuses, such as Penn State, Dartmouth, Stanford, Washington and Lee, Oberlin, Lasell College in Massachusetts, Denison University in Ohio, Cornell and Notre Dame. The next UBRC on the horizon: the New Admiral at the Lake in downtown Chicago, which hopes to partner with the University of Chicago and other local colleges and expects to launch in September 2012.

Feeling at home — and enriched

Part of the appeal of affinity communities, say residents, is that a shared vision or love makes them instantly comfortable and able to forge friendships quickly. "I've never been at a place where I was in the majority," says Russell of Rainbow Vision in Santa Fe. "It's become so matter-of-fact here that I forget that being a gay person is the least bit unusual," he says. What is unusual is that a cabaret and lounge on the property featuring jazz performers, singers, pianists and live DJs is open to the public, as is its award-winning restaurant and fitness center and spa. The offerings are rich and have widespread appeal; some who choose to live at Rainbow Vision are straight.

"We are starting to get a lot more inquiries from baby boomers to rent or buy," says Jane Steinberg, Rainbow Vision's marketing and sales director. "They want to know that there are care options available." Assisted living services are bursting there, prompting the owners to consider retrofitting one of the independent living buildings for more space.

In UBRCs, skilled nursing care is already in place. So far, there are more than 50 such university communities nationwide, with most residents in their 70s and 80s. According to Andrew Carle, within the last five years alone, approximately four dozen university-related retirement communities have been proposed or are under construction. Besides auditing classes or taking in events on campus, back at the community there may be lectures or learning workshops, with college students often collaborating with residents.

Truly part of a community >>

Truly part of a community

Kendal also has become the go-to spot to study aging and memory. "Cornell has realized that we're a living laboratory for studies in aging, so our residents get interviewed, and we're constantly fielding proposals from graduate students for research projects," says Betsy Schermerhorn, director of marketing and admissions for Kendal at Ithaca. It's an opportunity for both sides to interact with a demographic they ordinarily wouldn't.

Cindy Noble, 79, a former Cornell administrator and professor, lives in a two-bedroom unit at Kendal. She knows 40 former Cornell faculty members alone from just one of the university's 13 schools who are at Kendal, as well as the past president and provost. Often, current faculty come to present their latest research findings.

"It's good for us because it helps residents keep up-to-date with the university," says Noble, "and it's good for Cornell because it keeps them in contact with former faculty and alums, many of whom are loyal donors." Some residents have children who graduated from Cornell or Ithaca, grandchildren currently there, or adult children or nieces and nephews on the faculty. Like many older adults today, not everyone in UBRC housing is retired. One physicist at Kendal at Ithaca bikes to his office every day.

There are also plenty of adults at UBRC's with nonacademic backgrounds and no college connection. On the Kendal grounds are walking trails, a creative arts studio, a dog play area, and an 11,000-volume library. So many people signed up to learn Italian that they had to form two sections, while the winemaking group concocts its brew and conducts tastings in Kendal's wine cellar. Avid golfers can hit the links on courses nearby, volunteer at the Sciencenter museum downtown, eat out at one of the many restaurants or check out local theater.

A niche for au naturale >>

A niche for au naturale

One thing the college-centered Kendal crowd doesn't do, however, is hang out in the buff. Not so for Paul Brenot, 66, who lives in one of seven connecting nudist communities near Tampa, Fla. 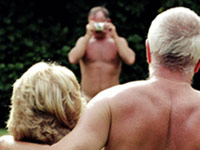 He and other naturists are worried about their future. "There are thousands of us, probably well over 10,000, who are practicing nudists," says Brenot, a commercial pilot-turned real estate agent. "We have nowhere to go when we get older for services except outside our culture. The biggest misconception is that people think nudism is about sex. It's totally the opposite. It's about meeting the real person within, and it comes down to body acceptance," Brenot says. "I feel like a car getting dings here and there. I've put on a few pounds and don't have quite the Adonis figure I used to have, but who cares?"

Staff and assisted living residents certainly won't at the assisted living center Brenot and other naturists are hoping to build once the economy recovers. "Wouldn't it be nice if we had a local assisted living so we could continue to feel comfortable in our own skin?" he says. Supporters floated the idea and received enormous interest. Their day in the sun will come within the next few years, believes Brenot.

And that will mean yet another housing option for the Woodstock generation.

Sally Abrahms, a writer from Boston, wrote this article as part of her MetLife Foundation Journalists on Aging Fellowship in partnership with New America Media and the Gerontological Society of America.