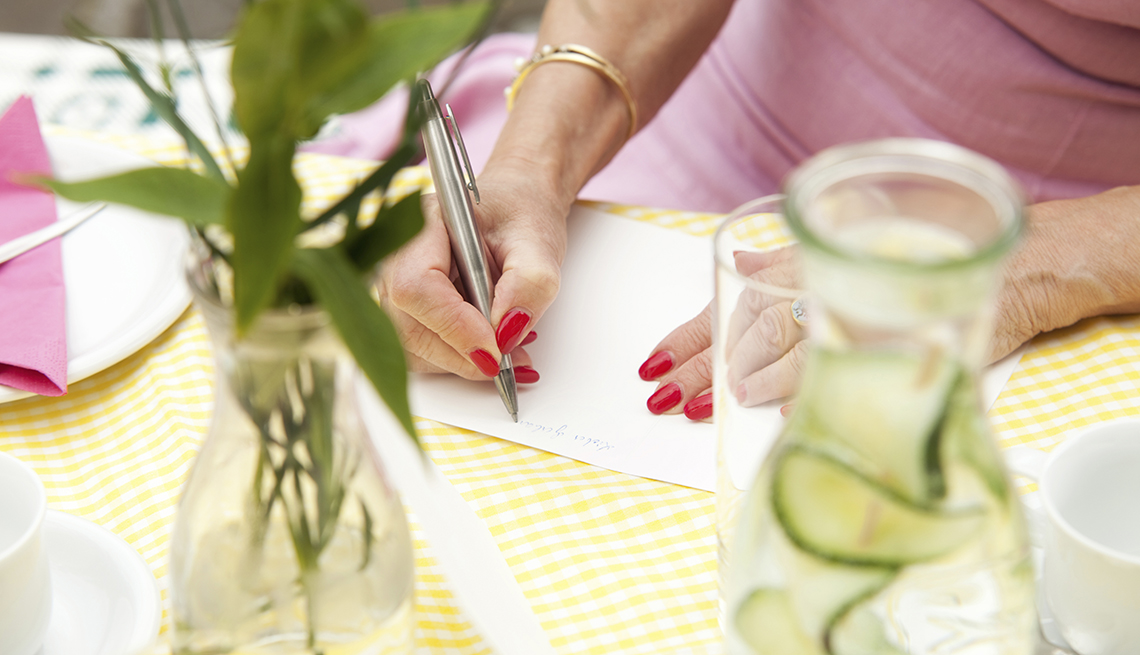 En español | A condolence letter is a time-tested way to tell the bereaved that their loved one mattered to you, that you care. The trouble is, many of us don't know what to write or worry that we will hit the wrong note.

In any situation, writing a sympathy note can be challenging. But it can be especially perplexing if you're writing in regard to someone you've never met, such as a friend's parent or your boss's spouse.

That angst can lead to procrastination or, even worse, not extending your sympathies at all.

"The biggest mistake people make with a sympathy note or condolence card is not sending it,” says Daniel Post Senning, the great-great-grandson of famed etiquette expert Emily Post, and coauthor of Emily Post's Etiquette, 19th edition. “Without question, it makes people feel acknowledged, supported, held up, connected to the community.”

Here are some expert tips on how to write a condolence letter.

Snail mail is better than email

Emails pile up, and your message can quickly get buried, so it's best to send a physical note.

If the person grieving is very close to you, start with a phone call and write the letter too. “It's not an either/or. It's a both,” says Senning. A letter “says I took the time to do this for you. I wanted you to have something I touched, that came from me, that has some of me in it."

A store-bought sympathy card is fine

Craft your message on a blank sheet of stationary or a note card with a soothing image such as flowers or a nature scene. It's fine to send a prewritten sympathy card and include a short personal note. “The simple act of sending the card lets your recipient know you care,” says Keely Chace, master writer at Hallmark and Hallmark.com.

Start the letter with the grieving person's first name if you know them well, or put “Dear” before their name if your relationship is more distant, or you don't know them at all. “Hi” is too casual. Then get right into the reason you're writing. “It is perfectly safe and fine to say, “I'm really sorry your dad died,” says Amy Cunningham, a funeral director and former magazine writer who has studied the history of condolence letters and lectures on the topic. She prefers the word “died” to “passed away” or “transitioned.” Cunningham acknowledges that the word “died” can sound blunt to some, but notes that the language of death and dying is changing to be more straightforward. “If you're writing to somebody who is New Age and into alternative medicine and mysticism it is OK to say ‘transitioned.’ You just have to know your audience,” she says.

Three or four lines are enough. After you acknowledge the loss, if you knew the deceased, tell the person who is grieving how you knew them, i.e., John and I worked together, or Susan and I were gym buddies. Then share a story, if you have one, about how they touched your life, and close it, Cunningham says.

"Any kind of anecdote of how you feel different because you knew them is super powerful,” she says.

Don't say time will heal. “It is a cliché. It's true that time is helpful but the new thinking on bereavement and loss is that the deaths that we grieve will be with us forever,” Cunningham says. End with a simple “with sympathy” or similar sentiment.

Look for inspiration from the deceased's life

Iva Kravitz, a marketing consultant and avid note-writer, finds inspiration from the person's funeral or memorial service. For a friend's mother who lost her husband of 72 years, she learned from the Zoom memorial service that he raised his daughters and granddaughters to be assertive, strong, confident women. In her note, she observed that he was a quiet feminist. “I think she'll appreciate that I had that realization about him,” Kravitz says.

A condolence card should uplift the person who experienced the loss. Don't delve into troubled or complex relationships, or write about your own losses, Cunningham says. “If you had coffee with your friend and they were telling you their dad's alcoholism had made their life a misery, my feeling is that you don't need to throw it into your condolence letter even if you know that's where they are.”

There are numerous free templates online for most every loss, whether a family member, boss, or even a pet. Hallmark provides suggested phrases for expressing sympathy. The Emily Post Institute gives advice for writing sympathy letters and examples. The Poetry Foundation has gathered together poems about consolation and grief. Cunningham says it's nice to print out a poem and include it with your note.

It's never too late

A week or two after the death is the ideal, but it's never too late to write. “Oftentimes those little points of connection that happen later on really also have a lot of significance for someone. If someone has passed, their world still is really in upheaval and all of a sudden, they get a note from someone when it seems like everyone else has forgotten,” Senning says.

Learn More About Funerals and End of Life