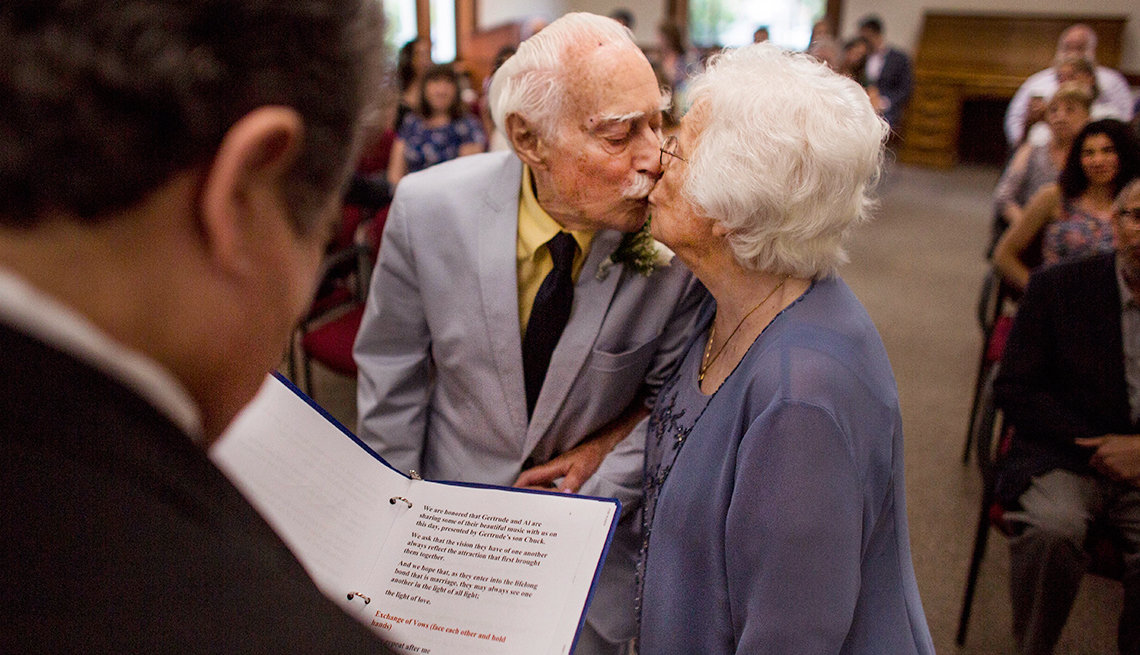 Age has never stopped Alvin Mann and Gertrude Mokotoff from doing what they want.

You’re never too old to fall in love and marry, as one couple just proved. With family members by their side, and wearing a garter on her leg, Gertrude Mokotoff, 98, and Alvin Mann, 94, recently tied the knot. The romance began eight years ago, according to the New York Times. A mutual friend of the two said to Mann, “I’d like you to meet a very nice young lady.” He said yes, and the rest is part of their story that is spreading around the world.

The two first met at a gym, and it was pretty much love at first sight. As tradition goes, next was the first date. The restaurant of choice: Something Sweet. “He was a perfect gentleman,” she said, and he added, “There was something about her that made me want to keep on talking.”

The couple, both widowed, dated for many years. They still recall their first sleepover. Mann says “we had spent the whole day together, and at night, I set up the bedroom for her, and I was going to be in the next room. She gets into the bed, and I say good night and start walking out, and she says, ‘Where are you going?’”

As the years passed, the couple did what couples do but still hadn’t married. That was until one night in June when they were driving home from the theater and Mokotoff decided to break tradition: “I asked him to marry me. I was tired of chasing after him.” They set Aug. 5 as their wedding date.

According to the Times, the Manns have seven children, 12 grandchildren and seven great-grandchildren. About 50 people made it to their ceremony at the Middletown, N.Y., City Hall. From there the couple hopped into his Toyota Corolla, laid on the gas and took off — aluminum cans serving as noisemakers, and a “Just Married” sign on the back of his car let everyone know he and Gert, as he calls her, are newlyweds.

Age has never stopped these two people from doing what they want. Mann said he believes there’s a difference between being old and feeling old, and he feels great. Last year he graduated from college with a bachelor's degree in history. Mokotoff, a longtime biology professor, decided to give politics a try later in life. She became the first female mayor of Middletown.

August is turning out to be a busy month for the two, as on Sunday Mokotoff turns 99 years old. With everything going on in their lives, the two still work out twice a week at the gym where they met.

So what is their secret to success? The couple answered that question and more in their in-depth interview with the New York Times.