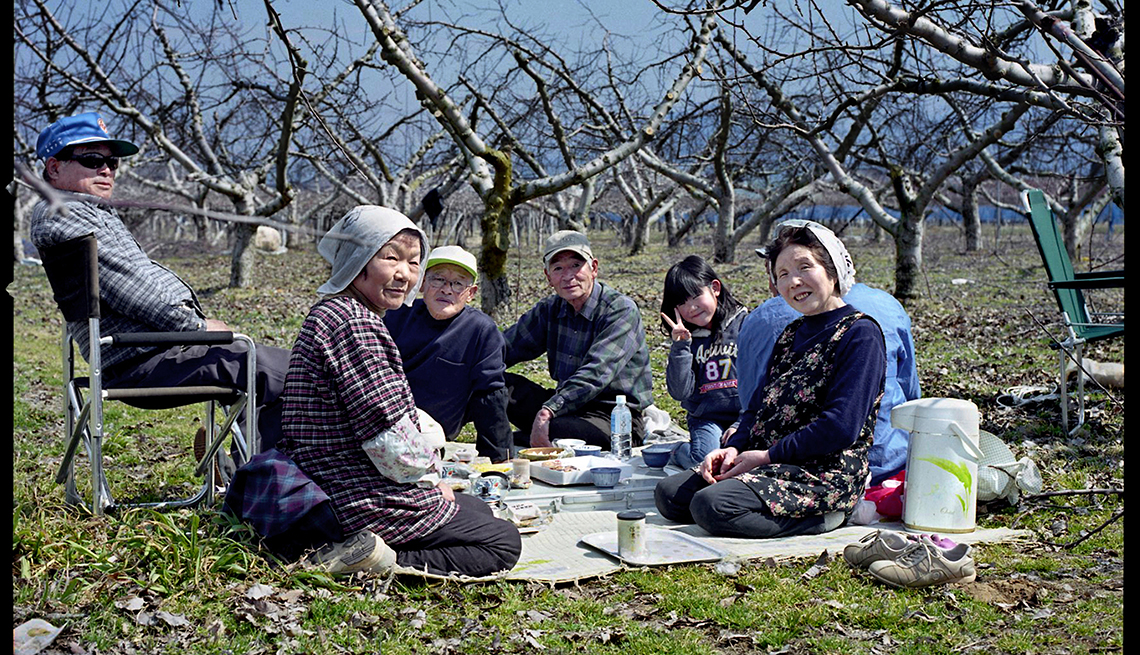 Nagano, Japan, has the longest life expectancy in the world, thanks to the region's healthy lifestyle.

En español l Takami Kuroiwa looks forward to weekends — not so he can relax with a little golf or TV, but to put in 12-hour days on the family farm. His regular job as a tourism manager provides a comfortable living, but raising his own fruit and vegetables is part of a lifelong routine.

At 66, Kuroiwa has already come out of retirement once and expects to work well into his later years.

"It's part of the lifestyle here. You work in an office and then you retire to the farm. It's just the next stage in life," Kuroiwa says. As it turns out, it's a very long life.

A healthy diet, regular physical activity, extended work years and aggressive government intervention have helped the Nagano region produce the longest life expectancy in Japan, which in turn is the longest in the world. That marks a remarkable turnaround for an area that, as recently as the early 1980s, had the highest rate of strokes in Japan.

No. 1 in: Life expectancy, employment rate for those 65+ and vegetable consumption per capita

Women in Nagano prefecture, an area slightly smaller than Connecticut, can expect to live an average of 87.2 years, while men can look forward to living 80.9 years, according to the latest data from Japan's Ministry of Health, Labor and Welfare. (In comparison, life expectancy in Connecticut averages 78.6 years for men and 82.9 for women. Hawaii has the highest life expectancy in the U.S., at 78 for men and 84.7 for women.)

The lifestyle in Nagano, home of the 1998 Winter Olympics, has also produced some of the lowest per capita medical costs in Japan. That saves consumers and taxpayers millions of dollars a year.

Officials now are hoping to export the Nagano experience to the rest of the country, and perhaps even farther.

"Nagano is unique in many ways, but there are lessons you can apply anywhere. Improve your diet, stay active, continue to work as you get older. The key is not just to live longer, but to stay healthy longer," says Takuji Shirasawa, M.D., who teaches at the Department of Aging Control Medicine at Juntendo University in Tokyo.

Keys to a long life

Japan is one of the most rapidly aging societies in the world. A quarter of the population is age 65 or older. In Tokyo alone, some 3.1 million residents will be 65 or older by 2025, according to the health ministry.

At first glance, Nagano would seem an unlikely setting for a long and healthy life.

Tucked high in the Japanese Alps, the area experiences long and harsh winters. Arable land is limited. Surrounded by mountains, Nagano is one of the few regions of Japan without immediate access to the fresh fish and seafood that makes up much of the national diet.

Even as Japan's economy boomed and longevity rates climbed through the postwar era, life expectancy in Nagano lagged. Men in particular suffered from high rates of stroke, heart attack and cerebral aneurysm.

Noriko Sonohara, head of the nonprofit Nagano Dietary Association, says much of the blame fell on a beloved, if unlikely, staple of the Nagano diet: pickled vegetables.

Housewives in Nagano for generations preserved all manner of homegrown produce to make up for the lack of fresh vegetables during long snowy winters, Sonohara explains. And while every village had a secret recipe for the dish, called tsukemono, all included one ingredient: copious amounts of salt. One survey found that Nagano residents on average were consuming 15.1 grams of salt per day — that's nearly three times the daily maximum in U.S. dietary guidelines. "In wintertime, people would sit around and talk and eat tsukemono all day," Sonohara says. "The turning point was 1981, when Nagano became number one in strokes. We decided, 'OK, we have to do something about this.' "

A focus on diet

The first step in boosting Nagano's life span was a campaign to reduce salt consumption and promote a healthier diet and lifestyle. Miso soup, served three times a day in many homes, became a prime target of health officials. Cases of hypertension and related illnesses began to decline shortly after, Sonohara says. The region of 2.1 million people now has some 4,500 volunteers who host seminars and clinics at supermarkets, shopping malls and community centers. They also conduct regular home visits to measure the salt content in daily meals and make dietary recommendations. "Our goal and our motives had nothing to do with becoming number one in life expectancy," said Sonohara. "[But] individual efforts and local initiatives gradually changed the lifestyle, and that in turn lengthened the life expectancy for the region as a whole."

At a recent cooking demonstration in a market near Nagano's main train station, volunteer Sumiko Hirano was preparing a dish of sesame pork with shiitake mushrooms and sliced pumpkin. The total salt per serving was 0.9 grams. But on this day, Hirano was exhorting a half-dozen shoppers, who had stopped to watch the demonstration, to reduce the use of cooking oil. For this recipe: just one teaspoon.

A licensed nutritionist, Hirano and several other volunteers also took time to dispense health advice to passersby. "At first it was difficult to convince people to change, but gradually it's becoming easier," says Hirano. "The government is encouraging people to maintain a healthier diet and lifestyle and organizing a lot of activities that they never had before, so that helps."

The efforts paid off with surprising speed. By 1990, life expectancy for men had risen three years in a decade in Nagano prefecture, and 3.5 years for women. Nagano life spans continued to climb until they topped all of Japan by 2010. Rates of deaths due to cancer, heart and liver disease, and pneumonia now rank well below the national average.

The private sector gets involved

As the effects of an improved diet began to be felt, the region's business community found ways to support a healthy lifestyle. In Matsumoto, the region's second largest city, a bank started offering higher interest rates and incentives like weekends at Tokyo's Disneyland for those who get medical checkups for three consecutive years. A convenience store chain has agreed to distribute health care information and host some 40 health fairs at various locations this year.

City health workers will take blood pressure readings, answer questions and distribute information on public health care services. "A lot of people never visit city hall, but they do go to convenience stores, so this is a good way to reach them," says Matsumoto's mayor, Akira Sugenoya, a surgeon.

Those preventive care efforts contributed to lower health care costs in Nagano, which came to about $2,488 per person in 2009. The per capita average in Japan was $3,120, according to a survey by the Kaiser Family Foundation. That compares with $8,233 in the United States. Japan's national health insurance program, which covers virtually all residents, including those in intensive nursing care, is funded in part by local contributions. "Preventive medicine is much less costly than having to put people in the hospital," Sugenoya says.

Another not-so-secret key to Nagano's remarkable longevity is a vigorous lifestyle, encouraged by local leaders.

In Matsumoto, officials have developed a network of more than 100 walking routes to encourage people to exercise. Community groups and neighborhood associations organize communal walks — not difficult in group-oriented Japan. Even in winter, clusters of residents can be found regularly walking along Matsumoto's streets, parks and canals and around its historic medieval castle downtown. Sugenoya says the walking trails are a cost-effective way to promote health and control medical costs. "The first thing we wanted was just to get people walking. Everyone can do that. You walk, you talk, you get exercise and that helps build up a sense of community," he says.

Nagano is ahead of the curve there as well. Nearly 1 in 4 people over 65 are still in the workforce — the highest rate in Japan. "We don't really know if people in Nagano continue to work because they are healthy, or if they are healthy because they continue to work," says Hiroko Akiyama, a professor at the University of Tokyo's Institute of Gerontology. "But we believe working does affect health."

Kuroiwa says he doesn't think about all that. He retired as village accountant a few years ago, but came back to manage a new tourism center last year. As before, his spare time goes into running his family's small farm, where he grows apples and rice along with an array of vegetables. His parents worked regularly into their late 80s, and Kuroiwa figures he and his wife will do the same. "No one here is particularly aware that we live longer than other people. We don't have any secret. We just go about our normal everyday lives and it just turns out that way."