When editors of Consumer Reports rate cars or refrigerators, potential buyers get sophisticated advice from engineers and technical people who know what they are doing. But when patients evaluate physicians, it’s another matter altogether.

Consumers can use a number of websites to rate their doctors. — Photo by Annie Engel/Corbis 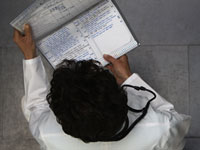 Need more information on how to manage your relationship with your health team? Use these tools to get started.

Aside from purely objective material (location, education, specialty), the information readers get on physician rating sites is mostly useless, critics say. One major drawback: too few ratings. Indeed, there is widespread agreement that the more ratings posted about a doctor, the more accurate the picture of the physician’s performance.

Some physicians are so incensed by what they call the unfairness of the ratings that they are asking patients to sign waivers — critics call them gag orders — promising not to post any reviews. And a few doctors reportedly give bribes or discounts for good reviews.

Yet physician ratings could turn out to be even more important than user ratings for the latest coffeemaker or family car.

As medical consumers, we want the best care for our money. In addition, experts say, health insurance carriers want the best physicians delivering the most efficient care at the lowest cost. And physicians themselves want to know about other physicians, how they’re handling swelling streams of patients and what those patients think of them.

Accordingly, the list-makers who rate physicians are arming to do battle — meaning, in their argot, to grab eyeballs, advertisers or even fees. The biggest players are Angie’s List, RateMDs, HealthGrades, Vitals and Vimo.

In all, there are more than 30 sites that compile patient opinions in various formats and put them on display, according to a 2008 report by Ruth Given, an independent health economist and analyst for many Internet companies.

But each site is far from perfect. Because the sites are relatively new, most doctors have just a few postings, and it’s rare to see a physician with more than 100 comments. Moreover, consumer groups worry that people searching for valid, reliable assessments of doctors too often find only highly personal, emotional opinions —  from angry rants to fulsome praise.

Are the comments fair?

The American Medical Association contends that these ratings should be viewed with healthy skepticism because the comments are subjective and not statistically valid. “The downside of the Internet is that things are so instantaneous, you can put something down very quickly, and it may not be exactly what you’d want to say in the light of day,” says AMA president James Rohack.

One of the few online enterprises taking an organized, scientific approach to doctor ratings is the one organized by Robert Krughoff of Washington, D.C. , who says he is trying to set up a system that’s fair to doctors and helpful to patients. A lawyer and an old hand at delivering consumer information, Krughoff is the founder of the Center for the Study of Services. He publishes the service-rating magazine Consumers’ Checkbook in several U.S. cities; the publication accepts no advertising and is supported by fees from subscribers. Not long ago he told Family Practice News, a trade publication that goes to 70,000 physicians: “Outcomes are much more difficult to measure in health care. Consumers know right away if the plumber is good. With a health care provider, they may not know until five or 10 years out.”

Next: A better way to evaluate docs? >>

While that’s still true, he says, the time is ripe to mine patients for what they do know about their physicians, and he’s out to correct what he thinks is an abominable situation in the M.D.-rating cosmos.

In July 2009, working with health care plans UnitedHealthcare, Aetna, Cigna and regional Blue Cross and Blue Shield plans, Krughoff launched a rating site based on patient answers to questionnaires developed by the U.S. Agency for Healthcare Research and Quality, a part of the federal Department of Health and Human Services, which sets the standard for querying patients about the care they’ve gotten from physicians. The insurance companies helped him survey a random sample of their patients.

"Our members tell us they want to know which doctors give high-quality care, and which listen, explain and follow up." — John Rother, AARP’s executive vice president for policy

Krughoff’s surveys, mailed to patients who have actually seen a doctor in the past 12 months, ask questions like: “How often did this doctor listen to you carefully?” “How often did this doctor explain things in a way that was easy to understand?” Physicians are scored based on responses. So far, Krughoff’s new, free physician ratings are available only in three metro areas — Denver, Kansas City, Mo., and Memphis, Tenn. But he intends to expand quickly to New York and other major communities.

The kind of information Krughoff’s patient surveys provide, AARP and other consumer groups say, is the gold standard.

“Our members tell us they want to know which doctors give high-quality care, and which listen, explain and follow up,” says John Rother, AARP’s executive vice president for policy. “We want this kind of solid information from patients to be publicly available because it can lead to better-informed decisions.”

Krughoff’s Checkbook website for Kansas City now has information on 710 primary care doctors, based on an average of 58 completed surveys for each doctor. He says his competitor Angie’s List “doesn’t have a single individual primary care doctor with more than eight ratings.”

Executives of Angie’s List, known for 14 years as a rater of local plumbers and contractors, say they’ve been in the physician rating business only a short time. Mike Rutz, the list’s vice president of health care services, says, “We’re getting there.” Many respondents are simply patients — among the 750,000 monthly subscribers to the list — who write voluntarily about their experiences and aren’t likely to be negative.

A large number of physicians get A’s on Angie’s List’s letter-based grading system. But there are a few clunkers. It took Indianapolis resident Jo Ann Klooz a year, after an unhappy encounter with a specialist, to complain about his behavior at a difficult moment. Klooz says the doctor checked his watch impatiently as her 10 brothers and sisters assembled to decide whether to take their 70-year-old father off a respirator. Finally, Klooz decided to post her feelings on Angie’s List. Klooz accused the doctor of being “unprofessional and insensitive.” “I gave him an F,” she says.

Rutz says Angie’s List collects 10,000 reports a month about patient experiences with physicians. “The majority of our reports come through our website and our call center” he says. “We also send periodic outbound e-mails and phone calls to our members to ask them if they have any reports or experiences they want to share with us. It’s a truly valuable activity that keeps the members engaged and really enhances that sense of community that comes with being a member.”

While a few sites are member-supported, says economist Given, most, like RateMDs, get their money from advertising. All the comments are anonymous, and doctors aren’t flagged when they initially appear on the site, even if the comments attack a doctor’s reputation.

Next: A doctor's view of the ratings sites. >>

The anonymity has made RateMDs cofounder John Swapceinski a target for some physicians who think the patient call-outs aren’t fair. “They’re not big proponents of freedom of speech. That’s what it really comes down to,” says Swapceinski, who has built his business in the face of doctor complaints, including legal efforts to pull down comments.

Swapceinski acknowledges that accuracy is an issue. “It’s true that some of the ratings that are up there are probably unfair. And the hope is the fair ratings will counteract and negate the unfair ones as more ratings are added,” he says. Ultimately, he hopes, the patient feedback will reward good doctors and punish bad ones. “It’s survival of the fittest,” says Swapceinski.

A Guide For Leaving the Hospital: What you should know before being discharged. Go

DocFinder: A database where you can check a physician's licensing and experience. Go

A doctor’s view of the sites

Milwaukee psychiatrist Shaili Jain believes doctors can benefit from taking a look at these sites. In her New England Journal of Medicine article “Googling Ourselves: What Physicians Can Learn From Online Rating Sites,” Jain argues that the sites offer doctors an opportunity to hear the unvarnished truth about what patients want or value.

“In the real world, disappointed patients rarely tell doctors to their face what they think of them,” she writes, mainly because patients feel vulnerable. In the patient-doctor relationship, “the treating physician holds most of the power.”

Of course, she adds, “whether publicly available performance evaluations will actually result in better care and service for patients or just more bureaucracy … remains to be seen.”

Still, some doctors are preempting their patients from rating their care, good or bad. Medical Justice, an organization that offers legal guidance to physicians, has developed a waiver that some patients are asked to sign prior to treatment. It effectively prohibits them from commenting about their physician online.

But Given believes the sites, as they evolve, can provide useful information. As she says, “there may be doctors who are somewhat clueless about how they come across, and how their office staff comes across, and this could be a wake-up call for them.”

Jeff Levine writes about health and medical issues. He lives in Rockville, Md.